Biratnagar-bound containers to be transported by rail route 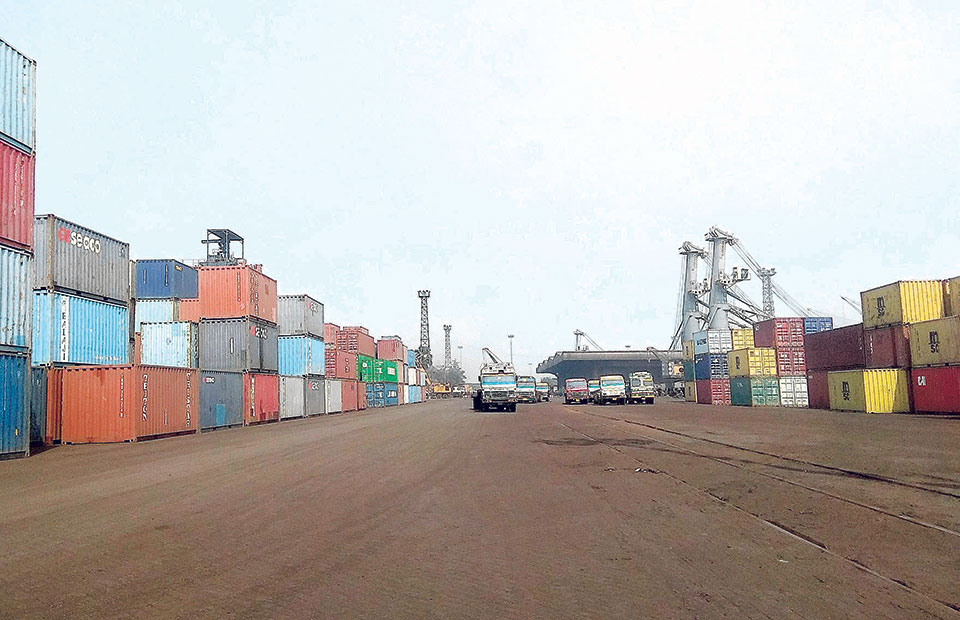 Nepal-bound containers are stored at the Majerhat terminal of CONCOR at the Kolkata port. Photo: Ritesh/Republica

KOLKATA, Feb 26: Nepali traders can import goods through rail route from the eastern customs point of Biratnagar from next week.

Container Corporation of India Ltd (CONCOR) has decided to bring Nepal's third-country imports via train up to Bathanaha Station which is near Nepal's customs point in Biratnagar.

The decision means goods that have arrived at Kolkata, Haldia and Vishakhapatnam ports can be imported to eastern Nepal via Bathanaha Railway Station.
CONCOR, an Indian government undertaking, has completed all necessary preparation to implement the decision.

“We have completed all formalities from the Ministry of Railways,” said Rathendra Raman, general manger of CONCOR Eastern Regional Office. “We will drop the containers at Bathanaha Station from where Nepali importers can easily transport goods toward Nepal.”

A total of 75,000 containers carrying third-country imports arrived in Nepal in FY 2016/17. Around 20 percent of them entered Nepal via Biratnagar border, according to Kolkata Port Trust.

“Most of the containers are reaching Biratnagar via roadway,” senior general manager of CONCOR, said. “As the number of Nepali container is likely to increase further in FY2017/18, transporting containers via railway to Bathanaha will be beneficial for both of us.”

CONCOR believes the decision will give a boost to its business since it can transport containers being transported via roadway once the decision comes into implementation.

CONCOR has already upgraded facilities at the Bathanaha Railway Station, which lies in Araria district of Bihar, to support movement of cargo train. Bathanaha lies just four kilometers away from Jogbani - an Indian town that borders Biratnagar.

The decision is expected to increasing trading activities through the Biratnagar Customs Office.

“So far, containers headed to Biratnagar are taking road route. But now onwards, use of railway service will ensure secure transportation,” said Eknarayan Aryal, Consulate General of Nepal in Kolkata, said. “I have been informed that the service will begin soon.”

According to Raman, CONCOR will start transporting containers to Bathanaha from March. “Since we have completed all the preparations, there won't be any delay,” he added.

KATHMANDU, April 8: Nepal and India have agreed to develop "an electrified rail line" connecting Kathmandu with Raxual of Bihar, as... Read More...

Dahal is guilty in SPP: UML Chairman Oli
26 minutes ago