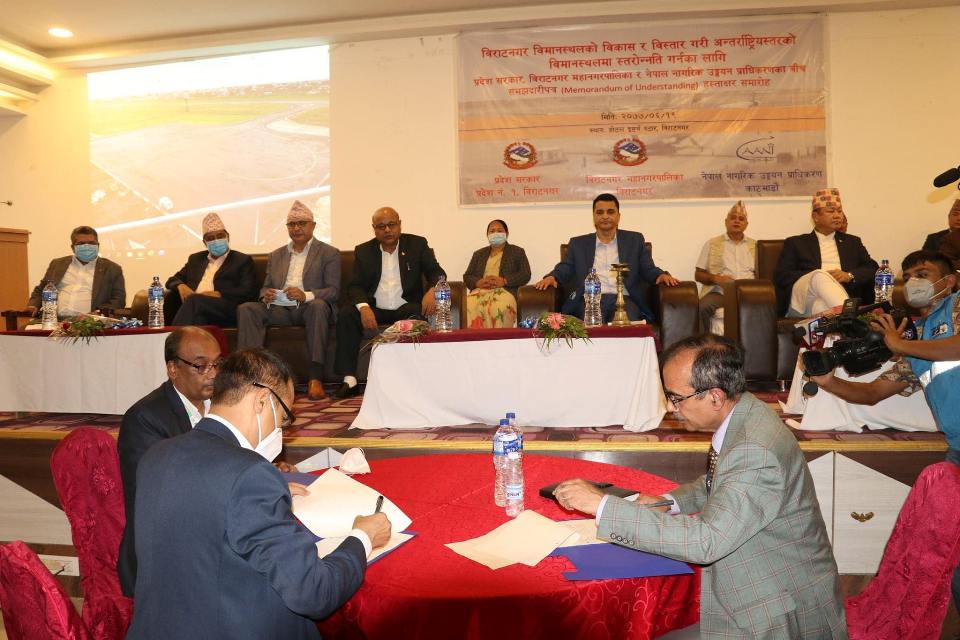 KATHMANDU, Oct 5: The government is developing the Biratnagar Airport as an entry point of East Nepal for tourists traveling through air.

The Civil Aviation Authority of Nepal (CAAN) and the government of Province 1 on Monday signed a memorandum of understanding (MoU) for the upgradation of Biratnagar Airport into an international airport.

Under the concept of cost-sharing, CAAN and the provincial government have agreed to extend the airport’s runway to 3,000 meters and develop other infrastructure to make the airport modern and equipped.

CAAN will prepare a technical master plan related to the development, expansion and upgradation of the airport. It will then submit the plan to the Ministry of Culture, Tourism and Civil Aviation for necessary decisions on land acquisition and compensation distribution. The authority will also prepare designs, a detailed project report (DPR) and work plans.

Similarly, the provincial government will coordinate for the developmental works and acquisition of land at the airport.

The MoU was signed by Rajan Pokharel, director general at CAAN, and Meghnath Kafle, secretary at the provincial Ministry of Industry, Tourism, Forests and Environment.

KATHMANDU, Dec 9: An agreement has been reached for the first time between Nepal Telecom (NT), the state-owned telecommunication service provider... Read More...