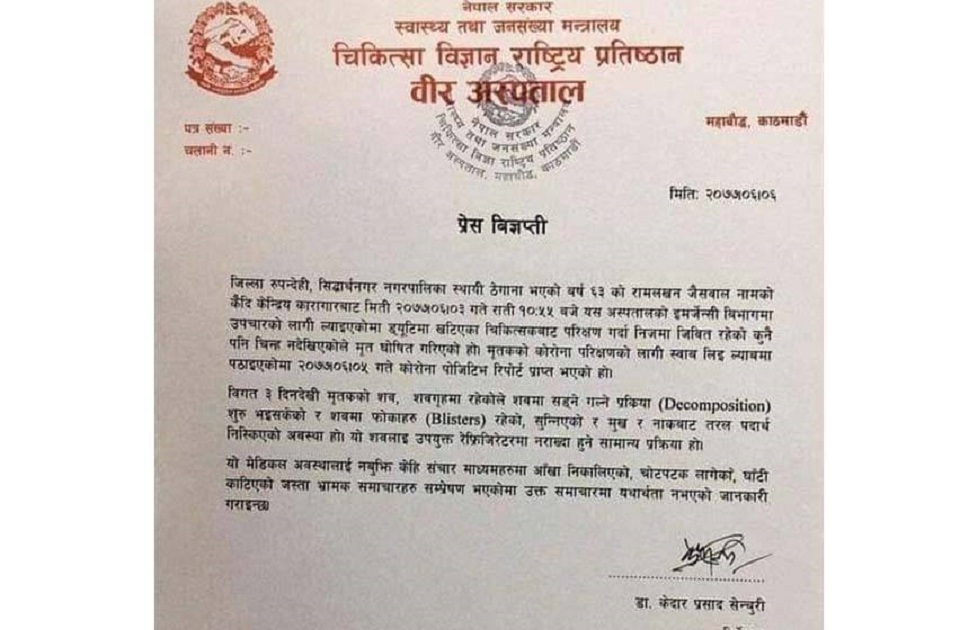 KATHMANDU, Sept 23: Bir hospital has denied accusations of medical misconduct on Ram Lakhan Jaiswal’s body. He was 63. In a press statement issued by the hospital on Tuesday evening, the hospital said that the allegations made by Jaiswal’s family members were not based on facts.

Rumors of Bir hospital taking out Jaiswal’s eyes quickly spread on social media. Jaiswal’s dead body was brought to the hospital a few days ago from the central jail. The body was in the morgue of the hospital after it tested positive for COVID-19. But on Tuesday, multiple videos were made public by various YouTube channels where Jaiswal’s daughter and some family members were seen accusing the hospital of performing an ‘organ procumbent’ from the dead body.

They accused the hospital of taking out his eyes and cutting off his throat. “The hospital has performed illegal organ procurement on my father’s dead body,” his daughter is heard saying in the videos.

Jaiswal’s daughter made such accusations after seeing his body in the morgue. “Initially, they did not allow me to see his body. We even had a physical clash. But after I refused to leave without seeing his dead body, they took me to the morgue,” she said in those videos.

Jaiswal’s daughter said that what she saw after being taken to the morgue was ‘terrifying’.

“His eyes had been taken out. His throat was cut and there were blisters all over his body. The cut in his throat was covered with a face mask,” she said adding,” how can I believe he died of the virus? This is a gruesome murder.”

However, the hospital authority has said that the allegations made against them are false and made without proper understanding. “The hospital has not performed any misconduct on the dead body. The rumors are absolutely false and have no factual evidence to support those accusations,” says the statement published by the hospital.

According to the hospital, Jaiswal was brought to the emergency ward of the hospital on Saturday evening at 10:55 PM. But he was already dead. After that, his swab was sent for a test. “The hospital received his test result only on Tuesday morning. It tested positive,” said the statement.

It had been more than three days since his body was kept in the morgue, his body had already started to decay. “The hospital had not used chemicals to preserve the dead body. A dead body often reacts this way if it is not refrigerated.”

“We urge people not to treat the hospital with contempt based on such allegations,” says Bir Hospital.

KATHMANDU, May 15: The Bir Hospital is unable to use its new hospital block due to the shortage of medical... Read More...

KATHMANDU, March 31: The coronavirus test reports of the two patients who passed away amidst the isolation care at Bir... Read More...

Govt organizations now have around 43,000 tons of chemical fertilizers in stock: MoALD
11 hours ago

Nepse inches up 2.16 points as daily turnover soars to Rs 1.56 billion on Sunday
13 hours ago

Govt to do all it can to boost security personnel’s morale: Home minister
14 hours ago

Karnali corridor blocked due to dry landslides
15 hours ago