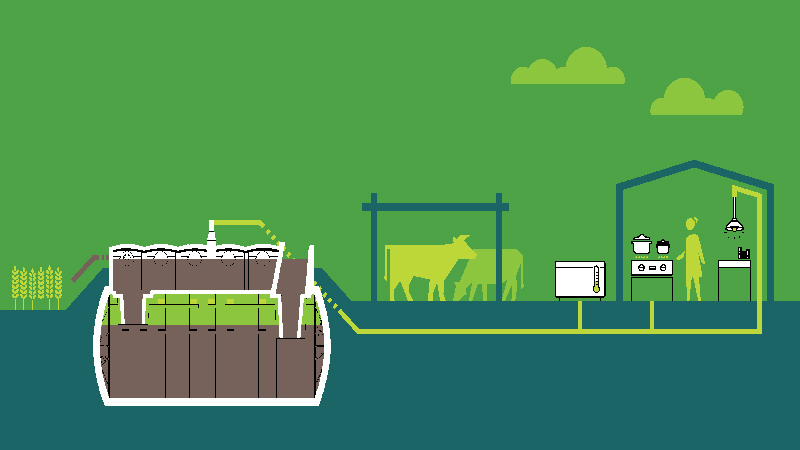 Nepal’s energy demand seems to be soaring at an alarming rate. The Nepal Electricity Authority (NEA) forecasted that the national energy demand would reach 4,280 MW by 2030 in its annual report for the fiscal year 2014-15. However, a joint survey carried out by the National Planning Commission (NPC) and Investment Board Nepal (IBN) showed that the forecast made by NEA was understated. In fact, Nepal needs an installed electrical capacity of 10,092 MW by 2030 if its Gross Domestic Product (GDP) grows at a constant rate of 5 percent per year.

Yet, the prospect of large scale hydroelectricity generation looks bleak especially due to frequent changes in government. 23.7% of Nepal’s population still depends on non-renewable forms of energy such as firewood and kerosene. Fuel demands are also rising with escalating issues of environmental concerns. Shockingly enough, Kathmandu was adjudged to be the third most polluted city in the world.

Thankfully, biogas offers plentiful comprehensive solutions. Biogas technology is the generation of combustible gas from anaerobic biomass digestion. Currently, there are millions of biogas plants operating throughout the world. While using this gas for direct combustion in gas lamps or household stove is common, producing electricity from biogas is still relatively rare in most developing countries. In Denmark and other industrialized countries, conversion of biogas to electricity has become a standard technology.

In countries like Nepal, China and India thousands of family scale biogas plants have been operated, utilizing very simple technologies. The feedstock used in these biogas plants creates biogas from the household and/or their small farming activity and the produced biogas is used for cooking and lighting needs. These plants are simple, robust, economical and sustainable. They can be constructed using locally available resources. Biogas can be used as a fuel in stationary and mobile engines, to supply motive power, pump water, drive machinery or generate electricity. It can be used in both spark and compression (diesel) engines and can prove to be a feasible option for small scale industries; greatly reducing the dependency on non-renewable sources of energy.

In 2011, 80 biogas plants were set up in ward number 4 of Daiji VDC of Kanchanpur district and a study was conducted. The fuel wood demand for families using traditional cooking stoves in a year was found to be twice than families using biogas. The study also showed that the installation of biogas plants resulted in saving fuel wood and reducing deforestation.

Apart from this, several other benefits were also received. Some of these were socio-economic improvements such as an increase in agricultural production due to the use of organic wastes for manure after the extraction of biogas. Similarly, locals didn’t have to spend money on chemical fertilizers. This small study demonstrates that biogas can be used to mitigate climate change as well.

However, a macro-economic evaluation of biogas is required before the development of large-scale biogas plants. Replacing conventional fuels like kerosene or firewood with biogas use can pave the way for environment conservation.

Biogas plants may affect sanitation and hygiene due to arbitrary disposal of wastes. These are problems that cannot be solved on an individual basis but only by collective decisions and measures.

Nonetheless, it’s time for biogas development to take a leap. Large scale biogas production has the potential for solving decade long problems such as load shedding and fuel shortage. Investment of money, skill and labour in hydroelectricity alone has plunged the country towards obscurity. If similar efforts are made for the development of large-scale biogas plants, a sound and stable future doesn’t seem very far away.

Biogas will make Nepal self-sufficient and self-reliant. The need for importing everything from electricity to petroleum will gradually decrease. Pollution will be controlled and the industrial sector will flourish. Hence, Nepal must aim to strengthen its environmental legislation and articulate strategies for the evolvement of biogas as it is an inexpensive environment friendly solution and the ultimate way out.

KATHMANDU, July 19: Nepal has the highest inflation in South Asia, according to a regional report. ... Read More...