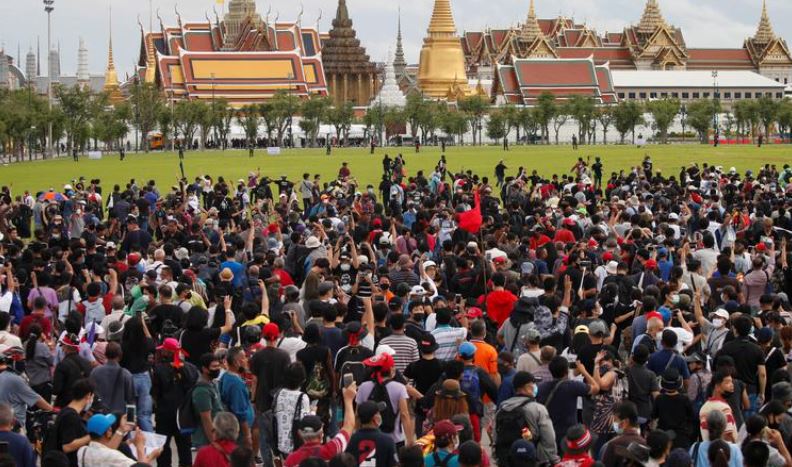 Pro-democracy protesters attend a mass rally to call for the ouster of prime minister Prayuth Chan-ocha's government and reforms in the monarchy, in Bangkok, Thailand, September 19, 2020. REUTERS/Soe Zeya Tun

BANGKOK, Sept 19: Around 20,000 people protested in Thailand’s capital on Saturday against the government of former coup leader and Prime Minister Prayuth Chan-ocha, with many demonstrators also calling for reforms to the monarchy.

“Down with feudalism, long live the people,” was one of the chants at the biggest demonstration in Bangkok since Prayuth took power in a 2014 coup.

Protests have been building in the southeast Asian country since mid July, demanding the removal of the government, a new constitution and elections. They have also broken a long-standing taboo by criticising the monarchy of King Maha Vajiralongkorn.

Saturday’s protests moved from the campus of Thammasat University, a traditional hotbed of opposition to the military and royalist establishment, on to Sanam Luang - translated as Royal Field - outside the Grand Palace.

“I hope the people in power will see the importance of the people,” student leader Panupong “Mike” Jadnok, told the crowd. “We are fighting to put the monarchy in the right place, not to abolish it.”

Organisers said there were 50,000 people present in the latest demonstration. Police said there were at least 18,000, still enough to make it bigger than a protest last month. Protesters have said they plan to stay overnight and march to Government House on Sunday morning.

The king was not in Thailand and has spent much of his time in Europe since taking the throne from his late father in 2016. The Royal Palace was not available for comment on the protests.

Sept. 19 is the anniversary of the coup against the populist then-prime minister Thaksin Shinawatra in 2006. Among the protesters were many of his red shirt followers, veterans of clashes a decade ago with pro-establishment yellow shirts.

“I’m here to fight for the future of my children and grandchildren. I hope that by the time I die, they will become free,” said 68-year-old Tasawan Suebthai, a redshirt with amulets round her neck which she hoped would ward off bullets.

So far the latest protests have been peaceful.

The military, which proclaims itself the defender of the monarchy and national stability, has carried out several bloody crackdowns on protesters since the end of absolute monarchy in 1932 as well as 13 successful coups.

Prayuth has said the government would allow protests but that demands for reform of the monarchy were not acceptable.

A 20-year-old student, who gave her name only as Waan for fear of reprisals, said it was time to reform the monarchy. “It’s a problem that’s been swept under the rug for so long. This must end right here.”

Protesters demand the scrapping of a lese majeste law against criticism of the monarchy. They also seek to reduce the king’s constitutional powers and his control over the palace fortune and units of the army.

The last time such a large crowd assembled at Sanam Luang was in mourning for the late King Bhumibol Adulyadej, who was widely revered in the country of 70 million.

There were also sympathy protests in Taipei and Tokyo while others were planned in Europe and North America.

KABUL, Oct 27: Nearly 6,000 Afghan civilians were killed or wounded in the first nine months of the year as... Read More...

PESHAWAR, Pakistan, Oct 27: A powerful bomb blast ripped through an Islamic seminary on the outskirts of the northwest Pakistani... Read More...

Nepal witnesses sharp decline in COVID-19 cases, only 570 new cases recorded in past 24 hours
1 hour ago
Marriage attendee found with left leg chopped off
3 hours ago