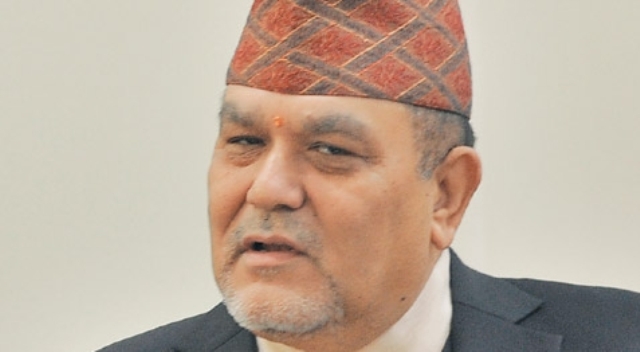 KATHMANDU, Oct 18: Repeated attempts to serve a Supreme Court notice on Chief Commissioner at the Commission for Investigation of Abuse of Authority (CIAA) Lokman Singh Karki ran  into hurdles for a third time on Monday.

The latest obstruction was created by a group of youths claiming that they had rented the house for office use. On the basis of photos taken during the obstruction, the youths were later identified as some close relatives and aides of CIAA chief Karki.

As per the court proceedings, two staffers of the apex court had reached Karki's residence at Baneshwor Heights but they were obstructed by the youths. After SC staffer Sambhu Khatri reported to the SC their inability to serve the notice despite repeated attempts, the court deputed two more staffers on Monday.

After the obstruction by the youths Monday, the SC staffers informed ward secretary Sarita Rai. But as she didn't show up even by in the last minute, the staffers themselves knocked on the ward office door.

Rai assured them she would reach Karki's residence and the two staffers then made a second attempt to serve the notice. But they were obstructed once again and told to paste their notice at the CIAA office, which Karki also used as his official residence, according to SC sources. Prawal Thapa, who is daughter-in-law to Karki, and Nepali Congress local leaders led the obstruction activities.

For lack of active support by ward office staff, the SC employees had to turn back without accomplishing their task,  court officials said.

According to the court officials, they are now left with two options -either serve the notice with the help of security officials or publish the notice in the press.

Meanwhile, the SC has been mulling departmental action against SC staffer Khatri, who was initially assigned to serve the court notice but subsequently went out of contact. "His statements relating to his going out of contact failed to convince, so he might be charged accordingly," said a staffer at the SC administration, requesting to remain unnamed.

Khatri, who was said to be on his way to office by taxi, mysteriously went out of contact before reaching the SC.

After the dillydallying over the precedings, the SC had scheduled hearings on the writ petition right after the Dashain festival.

The Supreme Court had on September 17 decided to review its previous verdict on a writ petition challenging Karki's appointment as CIAA chief. Two petitions were filed by Advocate Om Prakash Aryal  -- one demanding a court order to stop the government from appointing Karki, and another demanding annulment of the appointment.

Meeting of the ruling coalition begins
43 minutes ago