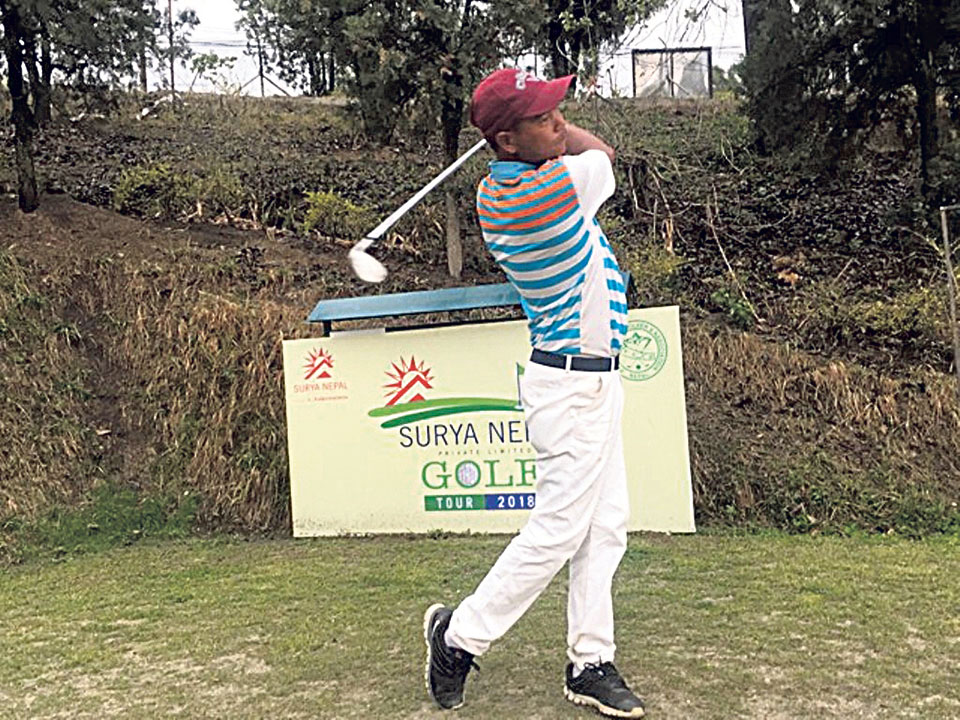 Bhuwan Nagarkoti hits a shot during the second day of the Surya Nepal Kathmandu Open at the Royal Nepal Golf Club in Kathmandu on Wednesday.

Gokarna Golf Club pro Bhuwan carded even-par 68 to post the 36-hole total of three-under 133. He is one stroke ahead of Bikash Adhikari, who fired two-under 66 for the total score of 134.

Jayaram Shrestha is third at even-par 136 after he played one-under 67. Rabi Khadka (67) and Shiva Ram Shrestha (69) shared the fourth position at one-over 137.

The play on the second day was halted for about an hour due to rain midway through the match.
Defending champion Rame Magar shared the sixth position at six-over 142 with Surya Prasad Sharma and Dhana Bahadur Thapa. Magar faltered to eight-over 76, while Thapa played four-over 72 and Sharma shot a 71. Bhuwan Kumar Rokka was 10th at 143 after he played a round of 76.

In amateur section, Tanka Bahadur Karki maintained his lead despite faltering to seven-over 75. Karki posted a total score of eight-over 144 to take a three-stroke lead over Subash Ghising, who played a round of five-over 73. Sunil KC (75) is third at 148. Surendra Phuyal, Binod Tamang and Sandeep Tamang also made the cut in amateur section.

A total of 33 professionals and 13 amateurs are taking part in the event organized by the Nepal PGA under the sponsorship of Surya Nepal Pvt Ltd.

KATHMANDU, Nov 28: Bhuwan Nagarkoti maintained the lead after the second round of the Surya Nepal Challenge, the third event... Read More...

KATHMANDU, Nov 30: Bhuwan Nagarkoti maintained lead after the fourth round of the Surya Nepal Challenge, the third event under the... Read More...