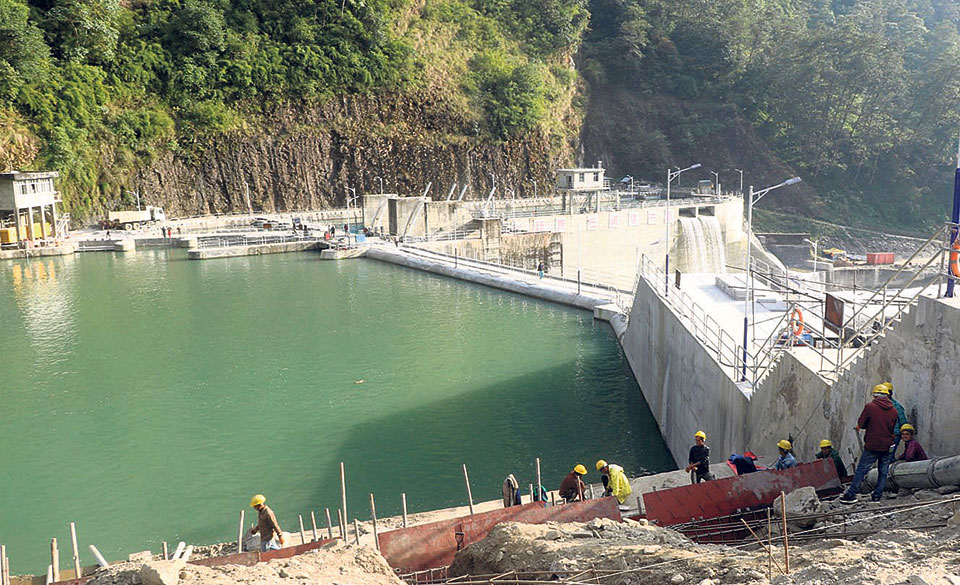 Reconstruction of the project cost it Rs 7 billion
SINDHUPALCHOWK, Nov 21: The 45-megawatt Bhotekoshi Hydropower Project, which is the largest private sector’s hydropower project, has started preparations for the test transmission.

The hydropower project was damaged due to flood in Bhotekoshi River in July, 2016. It was also damaged severely by the 2015 earthquake. The project was being reconstructed since the last one and half years. Chinese company Sino Hydro’s Bureau 11 is the contractor for the plant. It took about Rs 7 billion for the reconstruction of the project.

The Chinese company was responsible for civil, electronic and hydro mechanical works, while the installation of the turbine and generator was handled by other company.

The project located at Bhotekoshi Rural Municipality in Sindhupalchowk district and developed from the private sector remained closed for almost five years following the Jure landslide of 2014, Gorkha Earthquake of 2015 and heavy flood in the river occurred in 2016. The reconstruction works of the project gathered pace from April 2018.

According to Pradhan, there is a provision that NEA should test the project before it starts commercial production. “NEA will test the project within a week. The commercial power production will start within the next 15 days,” he added. After the reconstruction was completed, the project tested the physical infrastructure and equipment of the hydropower plant.

According to project officials, they have successfully tested dam, headworks and electro mechanical structure of the project.

The project had to reconstruct the dam, and 3.3-km-long tunnel, among other structures. Two transformers were also replaced. The flood had destroyed the dam, headworks and electro mechanical structure of the hydropower plant.

Before the flood, the hydropower plant had suffered big damages in the earthquake of April 25, 2015. The damages amounted to an estimated Rs 3 billion. Reconstruction work of the quake-damaged generator was going on when it was hit by the floods. The construction company’s cost increased by more than 60 percent due to damages from the repeated disasters. Prior to the reconstruction, the initial cost of the project was Rs 10 billion.

Previously, the work on transmission line was paused for six months due to landslide in Jure in August 2014. Four months after it resumed, the plant was destroyed in the earthquake. Earlier, the project used to earn profits amounting to USD 22-24 million every year.

The project situated in Tatopani and Phulping Katti areas of Bhote Koshi Rural Municipality produced 36 MW of electricity for 10 years and was grounded after it was affected by multiple natural disasters over the years. The capacity of the project was expanded to 45 MW following a Power Purchase Agreement (PPA) in 2011. The electricity produced from the project was powered five districts equal to the size of Sindhupalchowk.

It took 20 months for the company to complete the reconstruction works. While the project started installing new transmission lines, locals in the region obstructed the construction, demanding 35 percent stake in the hydropower. The construction only started after six percent of the stake was provided to the locals of the region.

RASUWA, Feb 23: The work of testing load flow from the Nepali side has been completed. The test is a... Read More...