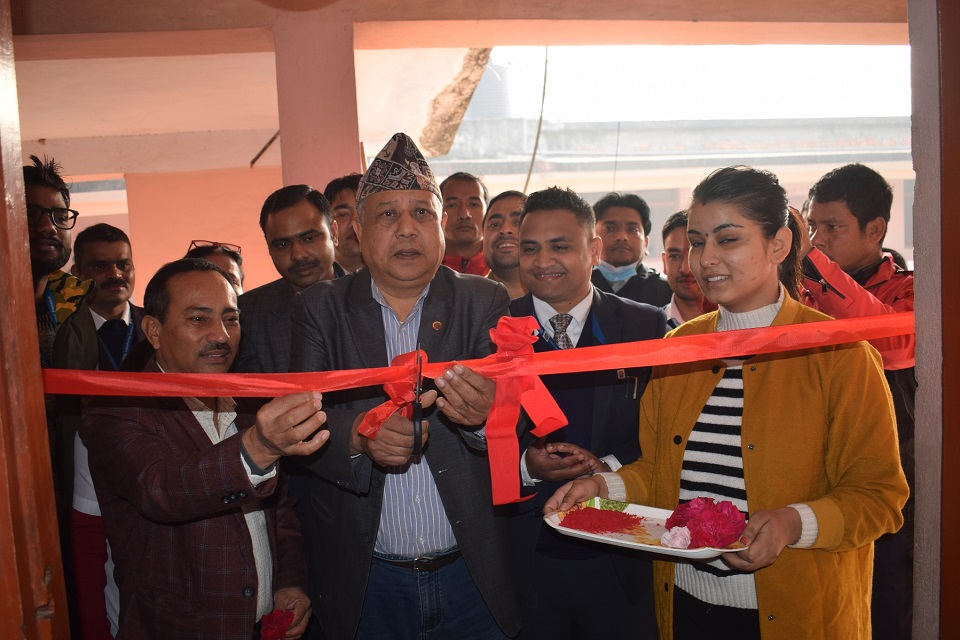 BHAIRAHAWA, Feb 14: A lab facility operating round the clock has been started at Bhim hospital in Bhairahawa. The expansion of this facility in the hospital that was established in 1990 BS has made it a lot easier for the locals.  Now the locals will not have to go to other places for blood, urine and stool tests.

According to medical superintendent of the hospital, Dr Nabin Darnal, this 24-hour lab service could be started after the hospital development committee arranged for special machines. “Previously, the service was only limited up to the OPD hours. However, now we have divided eight technicians into three shifts to provide a 24-hour service,” he said, adding, “We are working to provide a 24-hour X-Ray service and we will soon bring it into use.”

Currently, the hospital has been providing this service to about 70 people on a daily basis. This number increases by half – up to 150 people during the summer season. Previously, locals had to spend comparatively more money at private hospitals when this service wasn’t provided at the hospital. However, after the extension of this service at Bhim Hospital, it has become a lot easier for them.

The hospital’s lab is well-equipped to carry out most of the lab tests. “Our patients can enjoy all common lab tests except thyroid test for nearly half the price at private hospitals,” said Abhay Gopal Uphadhaya , the information officer at the hospital.

According to him, the hospital has facilities of Automatic analyzer, Cardiology and Bone calcium test. The process for adding (Newborn intensive care unit) NICU service is underway.

The hospital’s new lab services were inaugurated by Rupandehi District Coordination Committee chairman and chief of the hospital development committee, Ekraj Bishwakarma. Speaking at the inauguration function, Bishwakarma mentioned that the hospital will increase the number of beds from 25 beds to 50 beds.

“The ministry and cabinet meetings have already passed this decision seven days ago. The decision will surely materialize soon,” he said.

The hospital development committee has been making plans and working to change the hospital for good. A bigger emergency ward is being built at the hospital. The DPR of the master plan to invest Rs 200 million for the hospital’s facelift will be ready soon, according to the sources.

Kul Prashad Neupane, chairperson of Siddhartha Chambers of Commerce and Industry and a member of the hospital development committee said the plan is to develop Bhim Hospital into a maternity hospital as well.  Bhim Hospital was established in 1990 BS with just three beds. In 2065 B.S, the number of beds at the hospital was increased to 15 beds and 25 beds in 2041 BS. Although the government has issued permission for 100 beds, currently it has been running with only 60 beds. Currently, the hospital has provides the patients servives such as OPD, X-Ray, ECG, Dots treatment, USG, ART services, among others, according to Administration Officer Govinda Gyawali.

BHAIRAHAWA, Nov 23: Hari Lodh of Marchwar Rupandehi was busy in taking selfie having the Rani Mahal on the background.... Read More...