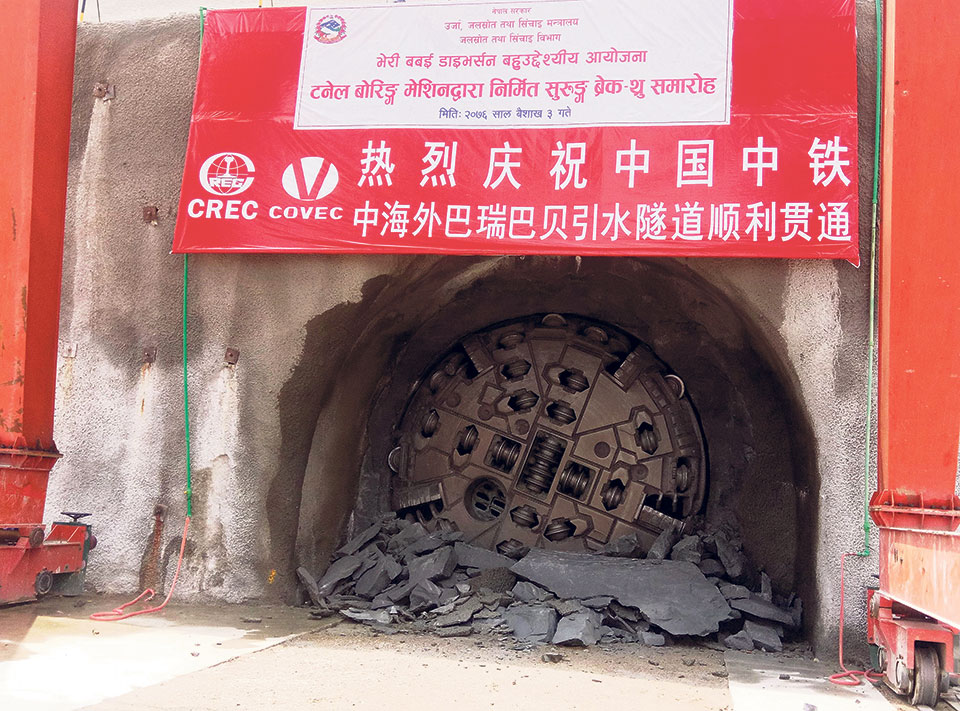 SURKHET, April 17: The drilling of a tunnel with the use of a Tunnel Boring Machine (TBM) has been completed in Nepal for the first time. With the help of the TBM, the 12.2 kilometer tunnel for the Bheri-Babai Diversion Multipurpose Project, a national pride project, has been completed about a year ahead of schedule.

The China Overseas Engineering Group Limited (Covec) started to drill the tunnel through the Chure hills in November 2017, from Hattikhal of Babai to Chiple in Bheri. Under the agreement signed by the contractor company with the Department of Water Resources and Irrigation (DoWRI), the deadline for completing the tunnel is March 28, 2020. However, the company has completed the drilling a year before deadline.

“This is the first time a TBM has been used in Nepal,” Director General of DoWRI Sarita Dawadi said. “With this success we have started the preparation for the construction of similar tunnels across the nation.”

US-based construction company Robins dug the tunnel with the use of the TBM, which is driverless. “If we had used the conventional method of drilling and blasting, it would have taken another five years,” Dawadi said. “The department was able to make the drilling breakthrough using the risky TBM method for the first time in Nepal.”

Bheri-Babai Diversion Multipurpose Project is also a first in Nepal for diverting the water of one river to another.

At the inauguration function, Prime Minister Oli lauded the project and called the use of the TBM for tunnel drilling the beginning of new technology in this country. “It is not just that new technology has entered Nepal, it is a matter of great gain,” he said, “The government has plans to execute various other multipurpose projects also such as the Sunkoshi-Marin Diversion Project.”

Bheri-Babai Diversion Multipurpose has the aim of irrigating 51,000 hectares in Bardiya and Banke and generating 48.8 Megawatt power through diversion of water from the Bheri at the rate of 40 cubic meters per second to the Babai.

Although the tunnel has been completed on time, the remaining work including construction of the Chiple dam and the powerhouse at Babai is yet to start. Chief of the project Sanjeev Baral informed Republica that a 114 meter-high dam is going to be built at Chiple while a 168 meter descending basin and a tunnel entry portal are also to be constructed.

Replicate the model of Bheri-Babai

Here is something for which the government of K P Sharma Oli can take credit, though his administration alone may... Read More...

US drops 'mother of all bombs' on Islamic State tunnel

In Turkey, night fills with screams and crying as earthquake rescues go on
2 hours ago