Bhanubhakta remembered by Nepali speakers across the globe 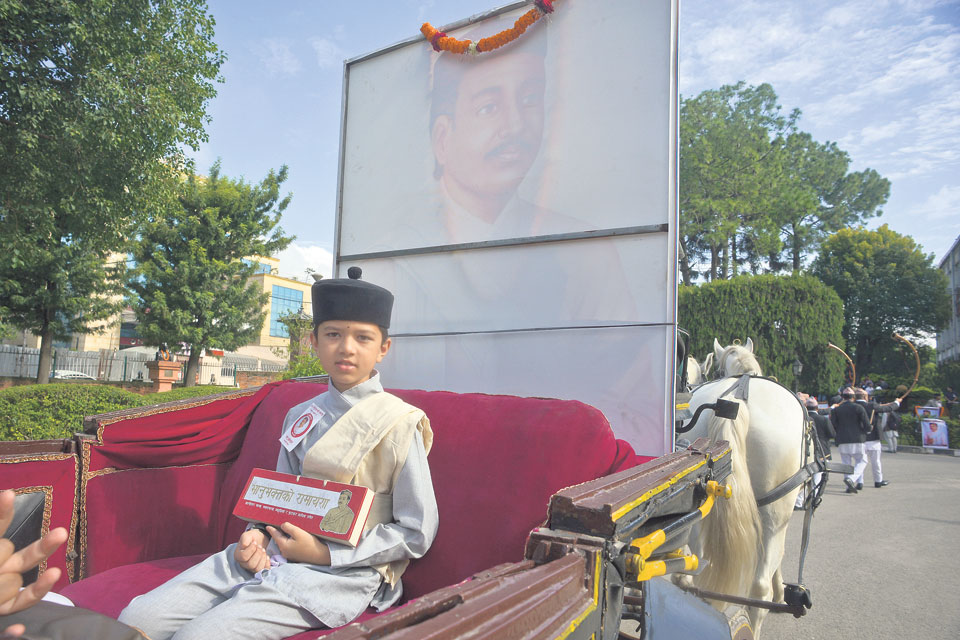 KATMANDU, July 13: Nepali speakers in Nepal, India, Bhutan and the rest of the world celebrated the 204th birth anniversary of Nepali poet Bhanubhakta Acharya on Thursday, organizing various programs in their areas.

Born 203 years ago in Chundi Ramgha, Tanahun district of Nepal, Bhanubhakta is best remembered for his translation of Ramayan from Sanskrit to Nepali, alongside a long list of literary works.

People in Nepal and India observed Bhanubhakta’s birth anniversary remembering his life and contribution to Nepali literature. Addressing a program organized by the Bhanu Foundation in the capital on Thursday, Prime Minister Sher Bahadur Deuba lauded Bhanu Bhakta’s contribution to the promotion of the Nepali language and literature.

The role of language and literature is always crucial for the prosperity of the nation, said Deuba. He also garlanded the late poet’s statue.

Various academic and cultural programs were organized in his remembrance while some poets recited his poems. Little Angels’ School organized the Sixth Poetry Competition on the occasion of Bhanu Jayanti. More than 15 schools from the Valley recited poems in remembrance of the late poet.

Celebration of Bhanu Jayanti is not just confined to the country. Nepalis residing in other countries also marked the day as an important event. Organizers say the main objective of celebrating Bhanu Jayanti among the Nepali society is maintaining harmony and unity.
In Darjeeling of West Bengal, India, Nepali speakers celebrated the day as Gorkha Jatiya Ekata Divas. Thousands of people gathered at Dambar Chowk of Kalimpong to commemorate the event. In Siliguri, Bhanu Jayanti was celebrated by organizing a bike rally.

Mamata Banjerjee,Chief Minister of West Bengal, also tweeted to remark the birth celebration of Bhanu Bhakta.This year’s Bhanu Jayanti celebration was special for people of Darjeeling who are in protest against the imposition of the Bengali language in school curriculum.

KATMANDU, July 13: Nepali speakers in Nepal, India, Bhutan and the rest of the world celebrated the 204th birth anniversary of... Read More...