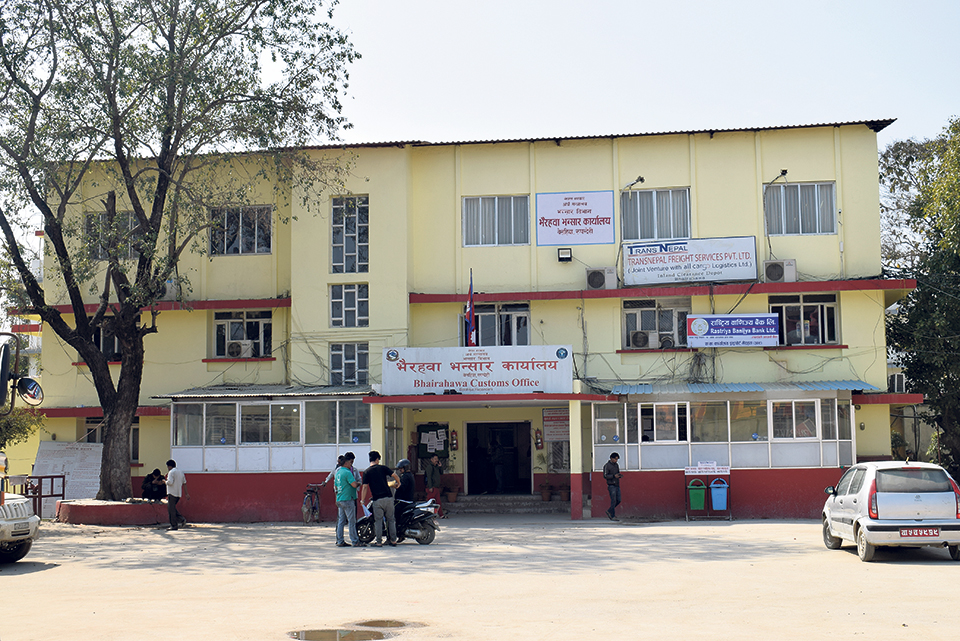 This photo shows the Bhairahawa Customs Office in Bhairahawa.

BHAIRAHAWA, March 18: The country's second largest and the first customs point of Province 5, Bhairahawa Customs Office, has failed to collect the targeted revenue in the previous month.

As the customs office continues to fail in securing the targeted revenue, the revenue collection for the current fiscal year is expected to be affected. The target for the customs office till mid-March was Rs 71.17 billion but the office has collected only 58.71 billion. Punya Prasad Lamsal, information officer at Bhairahawa customs office said that, the import of cement, clinker, diesel, bus, trucks, and gas has declined because of which the office has secured only 82.48% of the revenue collection target.

The office was provided with the target of Rs 8.47 billion during mid-February and mid-March. The office has managed to collect Rs 6.28 billion in revenue during the period. Open border, transformation of Chhoti Customs into main customs and self operation of customs points under the Bhairahawa Customs  have contributed to the shortfall in collection this year. The target for this year is 13% higher than last year whereas the customs office had only managed to collect 88% of the targeted revenue last year.

The Department of Customs had provided the office with an annual target of Rs 160 billion in revenue collection, of which the office has managed to collect only 55.38% of the targeted revenue till mid-February. The office had collected 57.42% of the target in the corresponding period last year.

An average of 600 loaded vehicles enter Nepal from this border point on a daily basis from which the office had been collecting Rs 230 million in revenue. According to the Customs Office, though the revenue collection from imports is good, the collection from the export sector has declined. The decline in the export of goods to India has caused the trade deficit to widen this fiscal year.

According to the statistics of the Customs Office, the revenue collection from import is good but the declining export has contributed to trade deficit. The statistics stated that goods amounting Rs 2.80 billion were exported to India and other third countries till mid-March in the last fiscal year against the export worth Rs 2.63 billion in the corresponding period this fiscal year.

Lawmakers asked not to bypass the people’s mandate, act as a puppet of the leadership ... Read More...