Beyond the lights, camera, and action 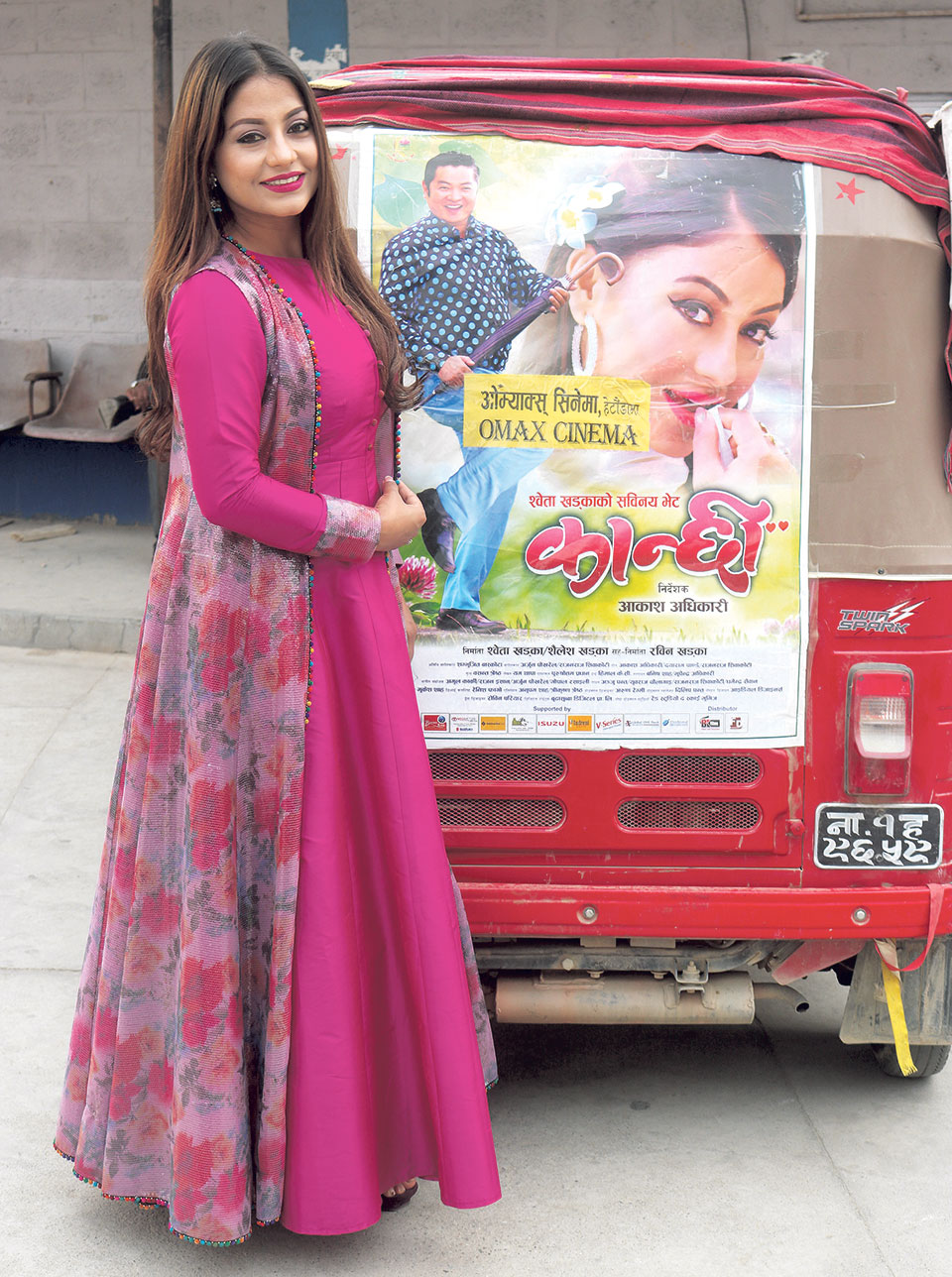 What we love about movies is how they become adaptations of lives that were, could be and should be.  Movies are portals through which stories are lived, loved, and cherished. Integral to the movies are the artists who bring life into the characters and give color to the pictures and voices to the stories. But the artists often have stories of their own that could pass off as movie plots.

And The Week is sharing one such story today.

Shweta Khadka came into the limelight with the movie ‘Kaha Bhetiyela’ to wide acclaim and love of critics and audiences alike. Since then she has made her presence felt as a force to be reckoned with in the Nepali film industry. Here Khadka answers some of our questions and sheds light into her life beyond the lights, camera, and action.

Were you always fascinated by the movie industry? What made you do movies?
Never in my wildest imagination did I think of becoming a part of the Nepali film industry. Yes, I’d watch movies and always appreciated the artistry but I never wished to join in. I took up dance lessons in Bijay Nagar to relieve my back pains and I’d heard then that a large banner company was looking for a new face who fit the standard Aryan features. I was really scouted in my dance lessons. They asked me to audition and I did. I never really imagined that it would go beyond that but it did. And I’m so very thankful for that.

You worked with a star-studded cast on your debut movie. How did you deal with the pressure?
The pressure was immense. Back then I had just finished high school and started working. To shoot for the movie I had to take leave from work and I had never spent a night away from home. We spent almost a month in the hills of Chitwan. The schedule for meals was a complete disarray but the actors paid no heed to their own needs as they were immersed in their work. The crew worked so passionately.

The storming weather and the rain didn’t deter them. I was amazed by their dedication and told myself that I shouldn’t fall behind. Everyone had expressed great faith in my ability, I couldn’t disappoint them. I spent long hours revising my scripts, consulting with the directors, senior actors and the crew. There were scenes for which I took 17 takes. The director felt I could do better and he pushed me incessantly. Somehow in the end I managed. I sometimes still want to pat myself in the back for doing what I did.

You have had a string of movies since ‘Kaha Bhetiyela’, what is it that you look for when deciding on roles and movies?
I have been quite selective in my choices. I think this is the right way to go. But some argue against doing so. ‘Kaha Bhetiyela’ was a movie shot amidst an outstanding cast and crew so you could say I have been spoilt from the very beginning. I see this as a learning curve, everything I do should help me learn and grow as an artist. Also I believe in delivering meaning through my characters and the films I’m a part of. My recent movie ‘Kanchi’ that I also produced is an embodiment of this belief. It addressed the LGBTQ issue, reflected the class disparity that has assumed its own form in the modern society and showed distinction between the poor and the rich. For me, it is about how much I learn and what meanings I can deliver.

Besides movies and acting, you have shown interest in philanthropy, most particular perhaps is your effort in the resettlement works in the Manjhi Basti in Sindhupalchowk. What made you initiate this?
This is a cause I feel strongly about. Sindhupalchok is my late husband’s hometown so hearing about how the district is struggling to get by since the earthquake really tugged at my heart. We wondered what we could do and the answer was everything. We set up ‘Shweta-Shree Foundation’ to help with the resettlement. The Maajhigaun Integrated Quake-resistant Settlement beside the river Indrawati was thus initiated. The project is set to complete sometime around Dashain this year and it will be home to over 53 quake affected families. We took charity support from movies, bank loans, governmental support and here we are. Seeing this project unfurl before my eyes gives me immense joy.

What does being an actor mean to you?
An actor is an interpreter of stories and people. He gets to live various lives through the many roles he plays. This is a burden and an honor at the same time. He has to shed tears at times when his own heart is gleeful and laugh when all he wants to do is cry his heart out. It is a difficult job. Being an actor, you have to erase your own identity to assume another. But, somehow in the end, when he sees people applauding his work, sharing his laughter and tears, it all comes together really beautifully. The audience’s love is what keeps an actor going. It is a job that takes everything from you but also one that gives you the world. It’s a good bargain, I suppose.

Born in 1987, Chandra Pant started his career as a stuntman in 2008 and later ventured into fight direction. But... Read More...

A trailer of an upcoming action genre Nepali movie ‘Cops’ has been released on Sunday via OSR Digital’s YouTube channel. Read More...