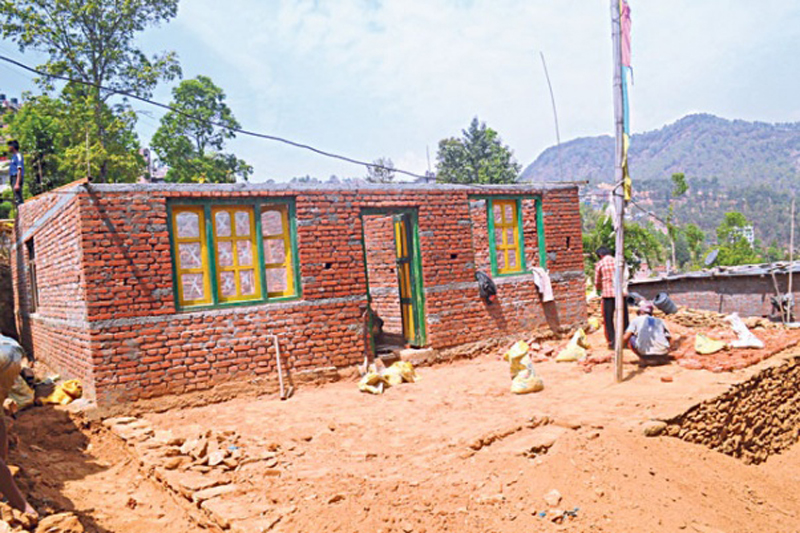 The NRA’s focus is continuous strengthening of institutional capacity of post-quake executing and implementing agencies.

The 2015 earthquake brought about immense pain and loss of many precious lives. However, it has also brought about hope for a prosperous Nepal. The quake had both social and economic implications. Barpak, the epicenter, lost almost 1,400 houses and six of its seven schools collapsed. Gradually, one can see a resurgent Barpark that is both resilient and vibrant, and with people from all walks of life joining hands to build schools, health centers and houses. The village is now slowly being transformed into a well-planned settlement with good hotels and other modern amenities for tourists as well. Barpak reflects a case of phoenix rising from the ashes.

The destruction in 2015 involved both human and capital losses, resulting in a big dent on the country’s productive capacity, disrupting the lives of everyone, with the marginalized communities hit the hardest. However, Nepal is definitely following the path of Gujarat, in its ability to rise from the rubble. Mason training has helped many women to turn their misfortunes into opportunities. Where women used to earn Rs 500 in daily wages they now make more than 1,000 a day. Single women from Chepang community in Gorkha’s Gandaki Rural Municipality who were not even able to put together two meals a day are now thinking of sending their children to schools. The overall market scenario has changed considerably. Women in many of these places were never involved in masonry. But they are now part of reconstruction. The situation is far from normal in worst affected areas but people are slowly finding their way back.

Moreover, the National Reconstruction Authority (NRA) has also appealed to different agencies to support with Rs 50,000 in additional grant or technical support (or both) for rebuilding of earthquake resilient houses for single women, dalits, elderly and differently able persons.

Young people are returning home to rebuild their house and earn in Nepal. Niroj Tamang, a 21-year-old, came back from Malaysia after three years, took the masonry training, and now earns Rs 1,500 a day. He is also building a resilient house for his family in Dolakha. The NRA is continuously working to involve more young people in reconstruction. The authority will coordinate with different agencies and start running masonry trainings in areas where the majority of young people are likely to leave for work. The NRA believes in leaving no one behind. In order to ensure better communication with quake-survivors from marginalized communities, the authority’s policies are played as radio jingles in Tamang, Gurung and Newar languages in districts with a big presence of these communities.

The authority is providing capacity building support to individuals interested in small business. Several livelihood trainings, including in agriculture, animal husbandry and irrigation, have been provided in affected districts, with a special focus on women and the marginalized. In partnership with the private sector, we are trying to facilitate easy access to reconstruction materials and an additional Rs 200,000 each will be provided to buy land to the landless. Also, the 10th steering committee meeting approved the proposal to place eight NRA local contact offices to look after all the 17 less affected districts, and these offices will be delegated with the authority to coordinate and communicate in their respective regions. They will also provide training at the local levels. The authority is also working to issue Rs 100,000 in advance as third installment to build private houses if affected families build according to set standards.

Om Prasad Pathak of Dolakha says that houses built by trained masons are stronger. In the past, the walls were built using mud and wood but now rods and timber are being used. He feels the houses built after the earthquakes are safer. In order to ensure that people are building resilient houses, the NRA is sending 332 engineers and technical assistants for re-verification and survey of the private houses missed during the first survey. The NRA sees reconstruction as a vehicle to build long-term social resilience by reducing vulnerabilities and strengthening community capacities to mitigate future disasters through improved construction practices.

The earthquake also changed the architecture of the houses in our villages and also influenced architectural practice as a whole. Houses throughout the affected region have been modified and earthquake resistance code, which had largely been ignored in the past, is now being enforced. These practices are replicated in other non-affected districts also.

For the long haul

The year 2017/18 is being seen as the year of physical and social reconstruction. The target is to complete reconstruction of private households and public infrastructures within the specified timeframe. To speed up grant distribution, the authority has already parked the funds for second and third installments of post-quake grants at the district level. We are focusing on long-term objectives, not only enabling people to build their homes but their lives as well. One of the key aspects of earthquake is that it has resulted in an increased awareness on earthquake safety.

It is often difficult to fathom the true scale of a disaster because physical damage is visible but other damages could be much higher and affect socio-economic growth for a long time. Our effort is to look beyond the rubble and create opportunities for long-term sustained growth. Inclusiveness is the priority in reconstruction; special attention has been paid to the needs of the poor, rural residents, and other vulnerable social groups that have greatly suffered from the earthquake. The NRA is working to strengthen the Gender Equality and Social Inclusion Unit by providing needed technical and financial support. The NRA is also coordinating with the private sector to organize livelihood trainings in affected districts.

Our focus has been continuous strengthening of the institutional capacity of executing and implementing agencies, along with adoption of sound governance in reconstruction process. We are open to changes if such changes in some way help quake survivors.

The author is the CEO of the National Reconstruction Authority