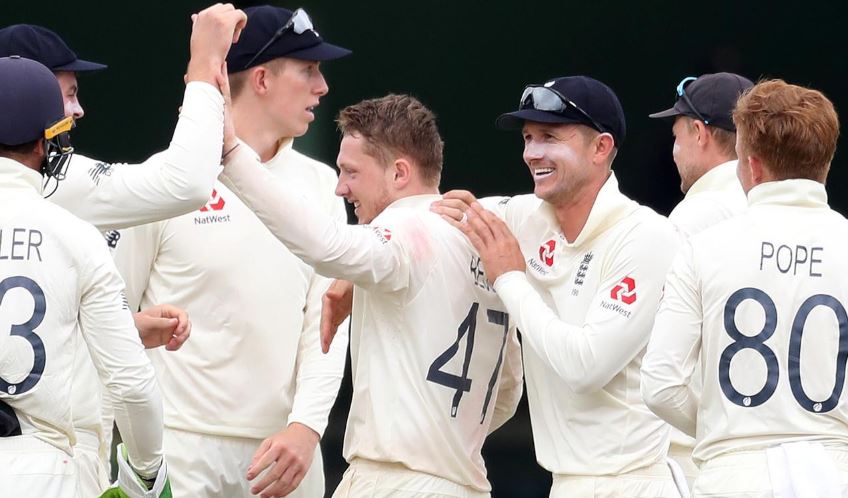 He had snagged two overnight as South Africa lost wickets at the start of their innings in the gloom at the close of the second day, and picked up where he left off on Saturday.

Dean Elgar was dismissed first, edging the ball off his pad to Ollie Pope at silly point, for 35 runs followed by Du Plessis, whose tenure as skipper of the South African side is now seriously in question.

He continued his poor form after belting two boundaries, also perishing to Bess in the same fashion as Elgar, making only eight runs.

But Bess’ fifth wicket came two balls later, to joyous celebration, as Van der Dussen played on and was bowled for 24 by the offspinner, who had not been originally selected for the tour but was flown to South Africa just before Christmas as cover when a virus struck the England camp.

Bess had figures of 5-41 when lunch was called early as rain forced the players off 15 minutes before the end of the morning session with Nortje 14 not out and Quinton de Kock yet to score after just arriving at the crease.

After being on the receiving end of a pounding from the England batsmen on the first two days, South Africa now face the prospect of needing to bat out the test to try to avoid defeat, similar to the last test in Cape Town when England clinched victory in the last hour on the fifth day.

England now hold the upper hand with the series level at 1-1.

The fourth and final test is in Johannesburg next week.

Sizzling Stokes had more than cricket on his mind at Newlands