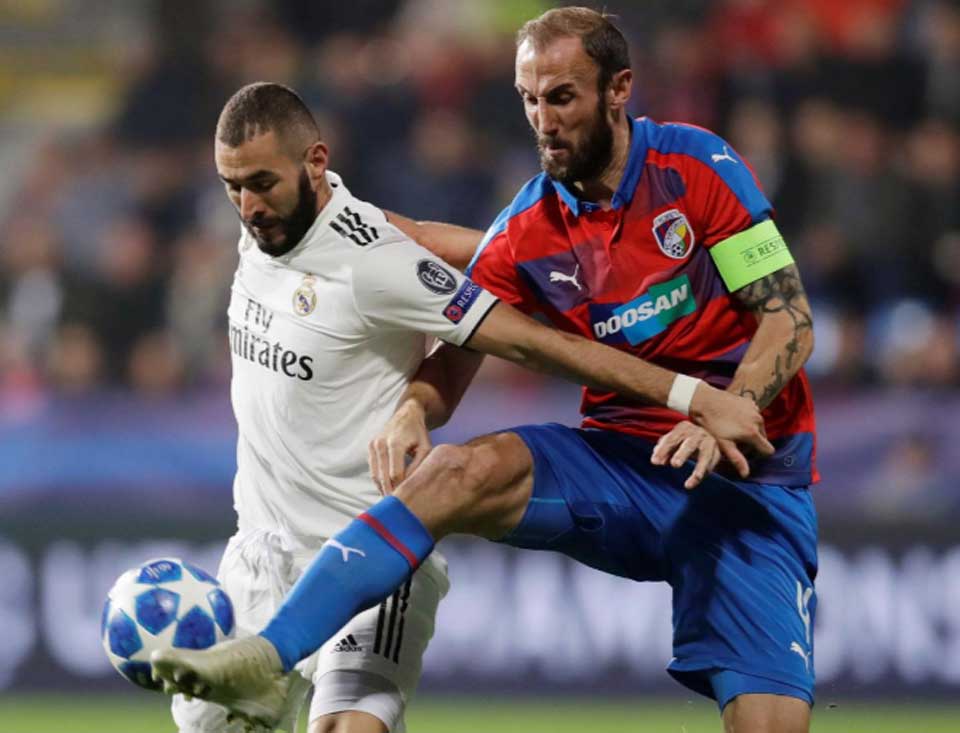 PLZEN, Czech, Nov 8: Real Madrid took a huge step towards clinching a spot in the Champions League knockout stage on Wednesday with a 5-0 rout of Viktoria Plzen as Karim Benzema scored two of four first-half goals for the Spanish giants.

In temporary coach Santiago Solari’s first Champions League game in charge Real began slowly but were out of sight before halftime after a clinical masterclass of finishing.

The victory also marked Real’s third in a row in all competitions under their temporary coach, who said he was focused on the next game rather than his status at the club.

“We came into the game fully focused and it showed,” Solari said. “We have the players here to score lots of goals and that’s what we did.”

With two games remaining in Group G reigning champions Real are joint top on nine points with AS Roma who beat CSKA Moscow 2-1. CSKA have four points with Plzen on one.

Benzema opened the scoring in the 20th minute when he beat two defenders before slipping a shot through the legs of Plzen goalkeeper Ales Hruska to claim his 200th goal for Real.

Casemiro doubled the lead three minutes later when the Brazilian outjumped his marker and headed home from a corner.

An unmarked Benzema notched his second goal in the 37th minute with a redirected header assisted by Gareth Bale to give Real a 3-0 lead and Benzema returned the favour minutes later when he flicked on a cross for Bale to sweep home a volley.

Toni Kroos completed the scoring in the 67th minute when he cooly chipped over the keeper after a counter-attack involving Brazilian substitute Vinicius on his Champions League debut.

“It was an important night for us,” Casemiro said. “We’ve scored five times and this result will give us confidence.

On other days we created chances like tonight but didn’t take them.”

What turned into a comfortable night for Real began in nervy fashion as Czech champions Plzen began brightly with Patrik Hrosovsky’s cross cannoning off Nacho and hitting the woodwork.

But any hopes Plzen harboured of a shock win were wiped out with two quickfire goals in the 21st and 23rd minutes.

“We conceded four goals in the first half and the match was over,” Plzen defender Lukas Hejda said.

The hosts were more lively after the break and managed a few shots on goal but could not find the quality they needed in the final third to chip away at Real’s lead.

Madrid beat Plzen 2-1 at home last month 2-1 with Julen Lopetegui at the helm before the former coach was sacked three months into his first season in charge after Real were thrashed by arch-rivals Barcelona.

The loss was Plzen’s second 5-0 drubbing in Group G play after Roma’s Edin Dzeko scored a hat-trick in leading the Italian side to an easy win in early October.

The Portuguese star is excited by his team's potential heading into the knockout phase as they topped their group despite... Read More...