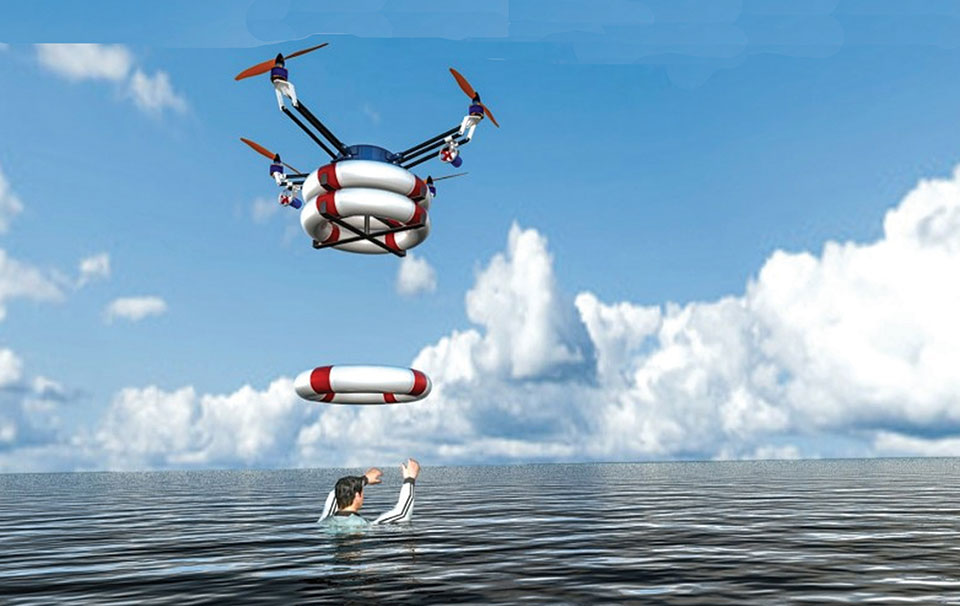 To minimize casualties and possible damage during the disasters, rescue teams can use drones to deliver immediate supplies and to establish communication

In recent decade drones have been subjected to many negative criticisms because of its undertoned use-value in security invasions and arms deployment, making drone a war material. Today when people think of drones, they get quick mental thought of flying machine trespassing private zones. However, there are many overlooked dimension of drone -use that will revolutionize our response mechanism during disaster management and ensure immediate protection of victims. As technology is evolving with new innovative updates to minimize harmful consequences after natural disaster like earthquakes, many scientists have also recommended the use of drone to mitigate the gap between rescue team and needy victims. Given the feature of flexibility and accessibility instilled in drone, it sometimes functions as the best disaster management option in specific cases.

Drones are being used in humanitarian response around the world. Numbers of small and lightweight unmanned aerial vehicles (UAVs) were launched in the Philippines after Typhoon Haiyan in 2013 and in Haiti following Hurricane Sandy in 2012. Today, Nepal too is no exception in such innovative crisis-response initiation.  The 1990s earthquake that took thousands of lives in Nepal, followed by similar destruction of 2015 quake triggered the need to develop new protection mechanism. In response, some innovative groups in Nepal are looking for ways to update high-flying technology to support post-disaster management.

Today, robotic hubs like ‘Nepal Flying Labs’ are working to develop better drone technology that could find disaster survivors and navigate disaster zone for rescue preparation. Actually Nepal has already entered the drone rescue phase. During the aftermath of the 2015 earthquake, drones assisted in creating 3D maps and models through image processing software which contributed to operating search and evacuation missions in some areas. Drones, specially designed for disaster response, possess hardware mechanism that can get high-resolution, real-time images of hard-to- reach locations after natural calamities. Such an image can be used to trace the location of alive victims and create accurate vulnerability map of the damaged area so that the prevention strategy can be made accordingly.

Before the rise of drone, satellite imagery was default option for digital mapping but given its limitations in data sharing, cloud vulnerability, cost issue and viable use, it is rapidly being replaced by new flying technology. Apart from some technological perks, drones are also accessible to the public which means, unlike satellite, the disaster-affected community can launch their own drone during crisis situation. With such public friendly tech-functionality, drones are emerging as a kind of technology that could help rural Nepali community to help themselves during natural disasters.

How drones help
Drones are cheap, easy to use and even rural people can be taught to use them. Let’s take a hypothetical case of how drones can be used by the rural community themselves during the post-earthquake rescue operation. After the quake hits, the community monitoring team will deploy drone which will fly around surveying the entire village. The flying machine equipped with its high-resolution camera will capture the image of destroyed areas and other required details. Then the monitoring group will analyze the real-time data and image to trace buried victims and soon deploy rescue team accordingly. Such information is essential before rescue because the possibility of survival after earthquake decreases significantly along with passing minutes. As research suggests, the survival rate drops to 90 percent after only an hour, 81 percent after a day and it’s just seven percent in a couple of days.

Similarly, with the ability to produce 3-D maps that are often more detailed than satellite imagery, drones can swiftly deliver valuable information on the humanitarian needs of survivors. To minimize the casualties and possible damage, rescue teams can use drones to deliver immediate supplies like food, medicine and it can even help to establish communication. By eliminating the risk of putting human vehicle in danger, this small unmanned machine can act as first aid relief during post-disaster rescue deployment. Drones can even make possible the establishment of temporary Wi-Fi and functioning cell phone tower to make communication possible in disaster zone.

During natural disaster like earthquake the primary goal of rescue will be to find survivors and evacuating people in safe place as soon possible. But in case of catastrophic damage, finding safe space could be challenging. In such situation flying drones can quickly map the area and guide groups of people to safe zone. It can cover large area as well as reach people much faster and easier than the ground team. Due to advancement in technology, today some drones are even installed with thermal cameras that can trace survivors by detecting body heat, adding more possibility of rescuing.

In the past there were debates considering the reliability of drone rescue as it’s more prone to crashes and technological failure, provoking suspension among people toward drones. But now as the benefits of drone are being established, it’s being considered as boon to humanity during rescue situations.

Support the drone
Thus the government should support local tech companies to develop and harness the capabilities of drones. If earthquake like that of 2015 hits the country again Nepal will need every possible technological and human help in affected areas. Disaster never comes with warning. The government should be prepared to tackle the challenges that follow.

The journey of thousand miles begins with a single step, goes the saying. And in this crucial phase of upcoming earthquake’s threat, that single step for Nepal is drone rescue initiation. For better earthquake response management, the government should fund in research and development of such technology. Instead of begging foreign help as usual, current government should give required support to local tech hubs for developing disaster-oriented drones. The government has invested billions in other mega projects that have not yielded anything good. In case of drone, it requires minimum support from the government’s side and it will result in great humanitarian advantage during the disaster.

We have a stable government and prime minister often talks about technological revolution. This is the right time for the government to support development of rescue drones.

July 26: Canadian police were using drones and dogs to scour harsh terrain in northern Manitoba on Thursday in the... Read More...

Officials in one of India’s fastest growing cities are using unmanned aerial vehicles (UAVs) to update land records in a... Read More...

While Intel unveiled its first commercially available drone this week with the Falcon 8+ drone, it made even bigger news... Read More...

Vitamin 'A' being administered to over 2.71 million kids Thursday and Friday
5 minutes ago

1,614 more people test positive for COVID-19 on Thursday as Nepal carries out a total of 9,491 PCR tests
58 minutes ago
'Green pigeon' spotted in Jhapa
3 hours ago