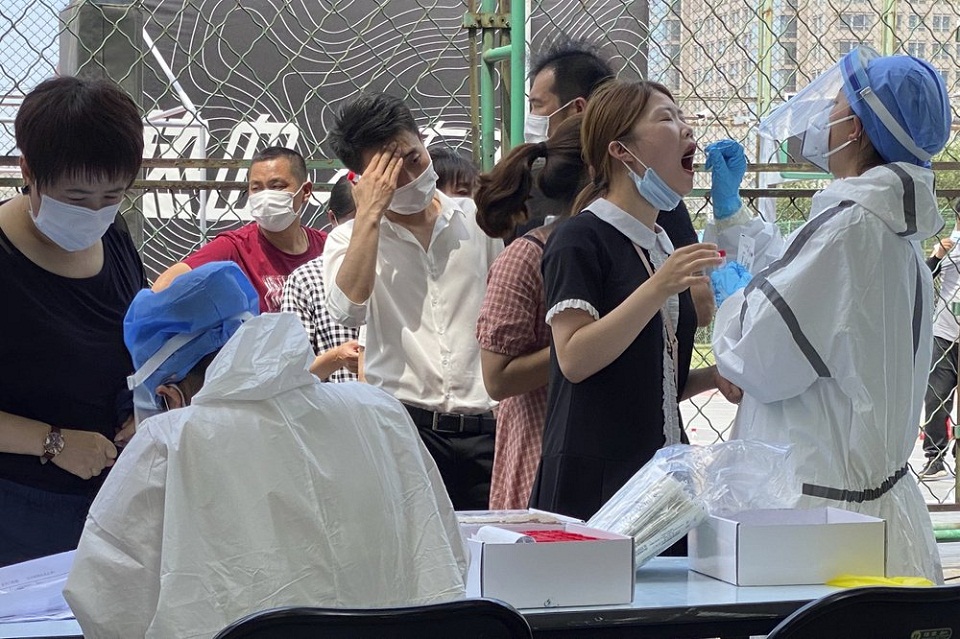 Residents line up to get tested at a coronavirus testing center set up outside a sports facility in Beijing, Tuesday, June 16, 2020. China reported several dozen more coronavirus infections Tuesday as it increased testing and lockdown measures in parts of the capital to control what appeared to be its largest outbreak in more than two months. (AP Photo/Ng Han Guan)

BEIJING, June 16: Chinese authorities locked down a third neighborhood in Beijing on Tuesday as they rushed to prevent the spread of a new coronavirus outbreak that has infected more than 100 people in a country that appeared to have largely contained the virus.

The resurgence in China highlighted public health expert calls for vigilance as many nations move forward with easing virus restrictions to revive their economies.

New Zealand, which hadn’t seen a new case in three weeks, said it is investigating a case in which two women who flew in from London to see a dying parent were allowed to leave quarantine and drive halfway across the country before they were tested and found to be positive. And the Philippines reimposed a strict lockdown on the city of Cebu after a rise in cases.

China reported 40 more coronavirus infections nationwide through the end of Monday, including 27 in Beijing, bringing the total to 106 in the nation’s capital since Thursday. At least one patient was in critical condition and two were in serious condition. Four cases were also reported in neighboring Hebei province, with three linked to the Beijing outbreak.

Most of the cases have been linked to the Xinfadi wholesale food market, and people lined up around the city for massive testing campaigns of anyone who had visited the market in the past two weeks or come in contact with them. About 9,000 workers at the market were tested previously.

The initial spread happened among market workers, Wu Zunyou, the chief epidemiologist at the Chinese Center for Disease Control and Prevention, told state broadcaster CCTV. He said that authorities detected the outbreak early enough to be confident they can contain it.

Authorities locked down seven residential compounds in Beijing’s Xicheng district, where the first case was confirmed on Thursday. They also barring residents of areas considered high-risk from leaving Beijing and banned taxis and car-hailing services from taking people out of the city.

The number of passengers on buses, trains and subways will also be limited and all are required to wear masks.

Fresh meat and seafood in the city and elsewhere in China was also being inspected, though experts have expressed doubt the virus could be spread via food supplies. Nonetheless, Chinese media reports said that salmon had been pulled from shelves in 14 cities including Beijing after the virus was found in a sample taken from a salmon chopping board at Xinfadi market.

The market has been closed for disinfection, as has a second market where three cases were confirmed. Residential communities around both markets have been put under lockdown, affecting 90,000 people in a city of 20 million.

China had relaxed many of its coronavirus controls after the ruling Communist Party in March declared victory over the virus, which was first detected the central Chinese city of Wuhan late last year.

The two women in New Zealand had been allowed to leave quarantine for compassionate reasons and traveled from Auckland to Wellington by car. Director-General of Health Ashley Bloomfield said that as part of their travel plan, they had no contact with any people or any public facilities on their road trip.

The women remain in isolation in Wellington, and tests were being conducted on passengers and staff on their flights, others at the Auckland hotel they initially quarantined at and a family member they met in Wellington.

South Korea, also battling to prevent a resurgence of the virus, reported 34 new cases of COVID-19 on Tuesday. Half were in the densely populated Seoul metropolitan area where officials have been scrambling to stem transmissions linked to leisure and religious activities and low-income workers who can’t afford to stay home.

Besides Cebu, Philippine officials retained quarantine restrictions in Manila for another two weeks as infections continued to spike.

Turkey, which has seen an uptick in cases since easing restrictions in early June, made the wearing of face masks mandatory in five more provinces on Tuesday. “We cannot struggle against the virus without masks,” Health Minister Fahrettin Koca tweeted.

The epidemic continues to grow sharply in India, which recorded 10,667 new cases, taking the tally to 343,091. Health services in the worst-hit cities of Mumbai, New Delhi and Chennai have been swamped by the rising infections. Nearly 10,000 people have died.

In the United States, Vice President Mike Pence encouraged governors Monday to highlight the “good news” around efforts to fight the virus despite several states reporting a rise in infections, which could intensify as people return to work and venture out during the summer.

In audio of the call obtained by The Associated Press, Pence said the U.S. is seeing strong drops in virus-related hospitalization and mortality rates and urged governors to make it clear to residents that “there’s a lot of really, really good news.”

One governor, Nevada’s Steve Sisolak, announced that current limits on businesses and gatherings would remain in place while health officials evaluate whether the state’s uptick in cases is cause for concern.

Sisolak said he and state health officials anticipated an increase in new cases after reopening and expanding testing capacity throughout June. “Recently we’ve experienced some trends that require additional evaluation and analysis,” he said at a news conference.

KATHMANDU, March 20: The National Assembly has been suspended until further notice. ... Read More...

Let yours truly take you guys back to the 13th century on merchant ships infested with flea-plagued rodents, before bringing... Read More...