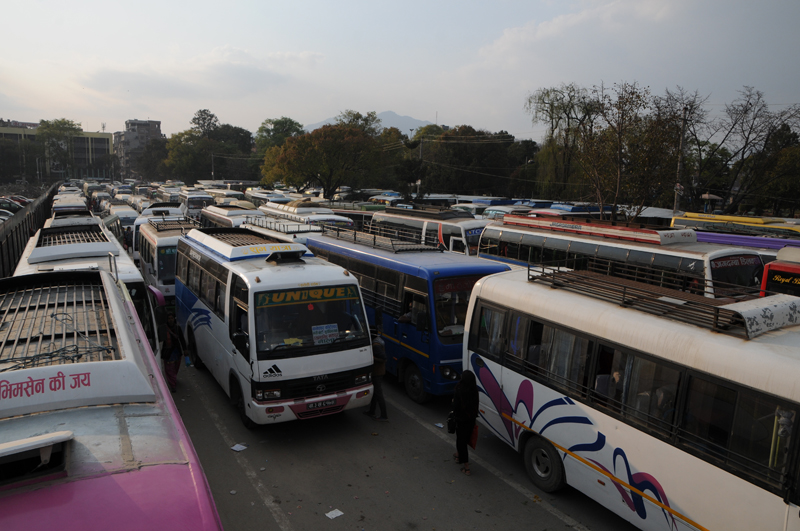 As a representative of the DoTM, Basanta Adhikari considers this decision, that was passed by the cabinet two years ago, finally coming into effect as a win on their part.

These may still be early days for the ban put on public vehicles older than 20 years, but Basanta Adhikari, head of the Department of Transport Management (DoTM), Ekantakuna division, expresses much pride in the effectiveness of the implementation so far.

“We have strictly denied route permits and are also not renewing licenses of those vehicles that exceed the years limit. This automatically makes them ineligible to run on the streets of our valley,” states Adhikari.

Throughout last year, whenever issues of air pollution or traffic congestions in and around Kathmandu were raised, Adhikari almost always brought up this proposed ban. So as a representative of the DoTM, he considers this decision, that was passed by the cabinet two years ago, finally coming into effect as a win on their part.

Over at the Lalitpur Minibus Byawasaya Sangh, Niratna Newa, though has a different take on the situation. Currently, 82 of his buses have been immobile for nearly two weeks now. He also claims that, in the span of these fourteen days, his business has already reached a fragile state. Most of his drivers and conductors too have not been able to secure new jobs. Thus of late, he has been busy making rounds of different ministries and sitting in on meeting with the members of Nepal Rastriya Yatayat Bus Byawasayi Sangh.

He claims there are more than 100 of them and they have demands. “Back when there was a similar plan to phase out the bikram tempos, they were given around 90% of custom discounts. The government should make similar arrangements for us,” explains Newa.

The DoTM though have always been clear that they don’t have plans to compensate the bus owners. Tok Raj Pandey, spokesperson for DoTM, further confirms that despite the recent appeals they haven’t changed their decision. When asked about whether the authorities have sat down to explain these terms to the entrepreneurs, Pandey simply states that, “everybody has to follow the rules set by the government, that’s a given. We don’t have to meet up and explain these things.”

And that’s where misunderst-andings are threatening to spill over. Newa shares how he personally went to the DoTM at Baneshwor recently to hand over the keys of some of his select few 20-year-old buses for them to test. He wanted to show them that the age of the vehicle doesn’t necessarily determine the level of vehicle emission.

He is confident that some of his 20 or so year old buses will pass the emission test because he has taken care in maintaining their engines as well. He wanted to reason with the authority but reveals that he has been unable to personally meet up with the director general as he had hoped. So far, he has only got word from the deputy general that the message will be passed on.

“The grounds on which they are choosing to ban the vehicles and the motives for it don’t really match up,” says Newa, “It’s not like I am against the ban. I simply want it to be on fair, justifiable grounds. We shall not hesitate to approach the court, if our demands are not met. ”

He says so as his peers like, Bidur Basnet, are legally allowed to run buses which emit a fair amount of smoke. The ban has forced Basnet to store two of his five buses in Kalanki, however, the rest are free to roll based on the technicality of the ban. The blue book shows that there is still 13 months left till his other buses hit the 20-year mark.

Basnet explains, “If things continue in this manner and the government doesn’t help us out with compensations, my business is all set to go into loss after three months. I am set to lose Rs 500 each day for each bus. It’s also why I don’t want to stop working the other buses. I am going to use them till the expiration date.”

Bibek Bista, the driver of one of Basnet’s buses, shares his own suspicions about the effectiveness of the ban and whether it can really achieve its main objective of improving the environment. According to his experience, buses tend to inevitably start emitting smoke after two years of usage and this is despite regular service and maintenance.

“We have to keep the state of our roads in mind. With the amount of dust that gets sucked into the filters and the engine, vehicular emission is pretty much unavoidable. Add to that, many drivers who individually own buses cannot afford the regular service that is required. The usage period of the vehicle isn’t the only contributing factor here,” says Bista.

Basnet and Bidur both reveal that the engines of the banned 20-year-old vehicles are most likely to be sold in Indian junkyards, which will then be repaired and recycled again in the new buses that shall ply around our cities. Thus, even from simple logistic point of view, they don’t see the 20-year-old vehicular ban alone contributing much in controlling air pollution.

Adhikari, from the DoTM, acknowledges to being aware of all these shortcomings that are being publicly discussed. He insists that all these qualms further highlight the importance of Vehicle Fitness Test Center (VFTC) and strategies. In his opinion, there should be at least five of those fully functioning in and around the capital, but as we know, even the one in Teku isn’t running efficiently. Also when asked about the DoTM’s future plans to work on VFTC programs, he fails to give any details.

It’s not that people are questioning the need for a ban. From the drivers at the bus parks to the entrepreneurs associated with various Yatayat Sanghs, it’s clearly made concerned parties more conscious about the conditions of the vehicles they operate and the effects they have on the environment and traffic. However, despite the increased general understanding, the basis of the regulation is proving to have one too many loopholes. As we stand, in absence of further amendments, it appears that the 20-year-old vehicular ban might not achieve all that it was touted to.

KATHMANDU, Sept 27: Some four months since the imposition of a ban on the employment of Nepali migrant workers in four... Read More...