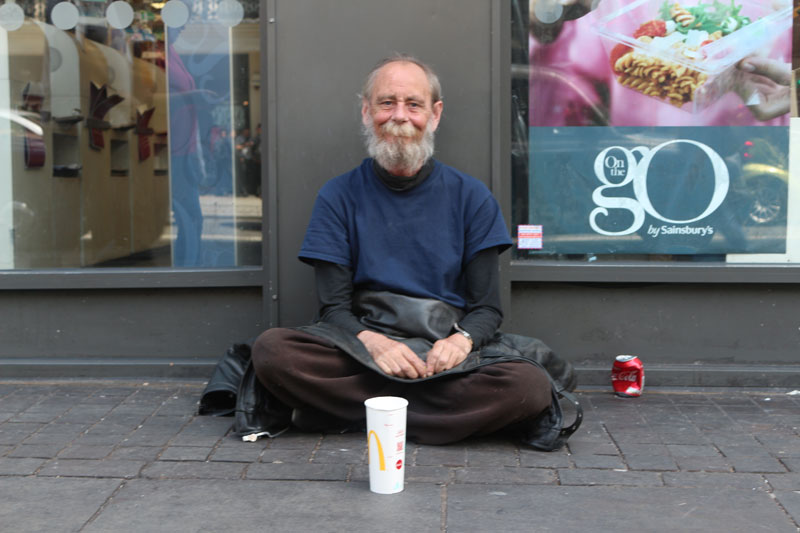 His fingers are covered with dirt as Jack Smith, 45, crouches outside a coffee shop, and shakes a large empty mineral water bottle for small change. His hair is long, dusted and messy. He looks like a man who has been betrayed by life. On the other corner, Mark Button, 50, rattles his empty paper cup. Meanwhile, a young man, not less than six feet tall, arrives out of nowhere, and secures a spot by the entrance of McDonald’s restaurant.
A few meters away, two men and a woman shake their begging bowls for money without shame as pedestrians pass by: change please! ‘I have no choice,’ the woman explained about why she decided to come to the street. ‘The money I make here helps me live.’
For many years, beggars remained unmonitored in the cities of the UK. But in recent years, the number of beggars in London and other cities has exploded, prompting some local authorities to call for a ‘crackdown’ on beggars, some of whom have travelled from as far as Eastern Europe. According to The Sun, a tabloid published in the UK, there are an estimated 17,800 beggars across England alone.

The presence of beggars on the streets of multicultural cities of what is among the richest countries in the world is a reminder of growing divide between the rich and the poor in the British society. But it is also an unanticipated result of the failure of capitalism.
Begging is a recordable offence in the UK, but it does not carry a jail sentence, as the law to control beggars is not well enforced. In February last year, local authorities introduced a wide range of measures targeting beggars to prohibit trading, leafleting and busking on the streets, leaving those breaking the rules facing at least £100 fine—or a criminal record. The measures are underpinned by laws introduced by the government in 2014, which allows local councils to ban activities they think have a ‘detrimental effect’ on public life. Many cities, including Oxford, Coventry, and Nottingham, have now introduced banning orders to tackle beggars on their streets.

A lively debate
But the orders have prompted a debate in the local press. Civil liberties groups pushing for greater individual rights argue that people have the right to beg. They criticize the local authorities for threatening people with fines for begging and warn the banning orders could create ‘bizarre new criminal offences’.

‘The measure will do nothing to target [begging] crime, but it will be very successful at squeezing elements of character and spontaneity out of city life,’ read a commentary on the website of The Oxford Times. ‘[The measures are] short-sighted, unworkable and likely to increase problems.’

However, the authorities contend that a majority of beggars are living on taxpayer money, and promoting anti-social behaviors in local societies by asking people for money in an aggressive manner. Thus the banning orders should be in place to maintain peace and social order.

According to a recent report by Beggar’s Belief, a local organization promoting public awareness on vulnerable people, many beggars have access to food, accommodation, clothing and are receiving benefits. The report also claims that some beggars prey on human generosity, for instance by appearing homeless to boost their incomes.

In 2015, the BBC cited a police source that more than one in five people arrested for begging in England and Wales were not genuine and had their own homes. Last year, The Independent, an English newspaper, published a similar article suggesting that ‘half of all beggars on streets of British cities owned their own homes. According to Thames Reach, a charity working with people suffering from homelessness, around 80 percent beggars in the UK actually don’t need money for accommodation.

The Daily Telegraph, a national daily from the UK, published a similar article citing a senior councilor as saying that some people in Wolverhampton were turning into beggars despite having their own homes and making as much as £500 a day. This amount would amount to a pre-tax annual income of around £130,000, which is £19,440 less than the annual salary of current Prime Minister Theresa May.

Reports suggest that most street braggers are also connected to illegal drugs, and people who beg on the streets do so to support their drug habits, particularly cocaine and heroin and super-strength alcohol. In 2016, the Metropolitan Police reported that between 70 percent and 80 percent of beggars had tested positive for A-class drugs. However, the police have not been able to control drugs abuse.

There have also been reports in local media of organized begging rings, including some women from Eastern Europe using their own children to target generous and wealthy commuters on the streets. But most street beggars are simply people like Jack, a British man who says he left his family 17 years ago and has never met them since and is begging for his own survival. He says he came to Westminster from Manchester in hopes of making more money.

Cleaning up cities
‘Street is my home,’ he says. ‘But it’s not easy to survive on the streets now.’
The local authorities are trying to remove—or even criminalize—beggars through a range of laws to clean the image of their cities. In January, three foreign-origin beggars from Liverpool’s street were arrested as part of an ‘intelligence-led operation’ and were forced to leave the country. In February, The Plymouth Herald published a similar story suggesting that two beggars from EU countries were arrested and removed from the UK, as they were a ‘burden on the social assistance systems of the UK’—even though the UK has not left the EU.

The public seems divided, with some people opposing the government ban.
Outside the London city, Keli Nutsugh, a 22-year Customer Officer at HSBC, was among the many people with critical views on the banning orders. He suggested that the ban on beggars would be a violation of citizens’ rights to freedom, but also that his sympathy was reserved only for genuine beggars.

‘If the beggars do not harm the public, they should be allowed to enjoy their way of life,’ he says. ‘And if the government wants to control beggars, it should educate them first.’
The National Council for Civil Liberties is one of several pressure groups trying to push debates on individual rights. It criticizes local councils for victimizing the vulnerable and homeless, and limiting freedom of speech and the right to protest. It describes begging and sleeping rough as the result of poverty and not as anti-social behaviors, as suggested by the government. Thus councils should be helping the vulnerable—not slapping them with criminal records and unplayable fines.

‘It is now between pressure groups and councils,’ says Keran Wood, 31, who has been living on the streets for past five years. ‘Hope these debates will be meaningful.’

On the other corner, Mark Button continues to rattle his empty cup for small change. He says he has no income other than what he makes from begging. As he feeds his pet, he doesn’t hesitate when asked why he cares for his pet.

‘People give more money to pets.’

KANCHANPUR, Feb 7: Employees of local bodies in the district have come to the streets demanding permanent status to those... Read More...

Thousands of anti-Trump protests take to streets of U.S. cities