Before the flood: Are we prepared? 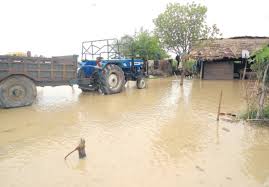 Despite Nepal being a natural disaster-prone country, the authorities appear little focused on countermeasures

KATHMANDU, June 10: Ready or not, the monsoon is upon us again. The first gentle rains come as a boon, helping farmers start cultivating the land on which their livelihood largely depends. But shortly thereafter, the monsoon unleashes its fury, bringing deaths and disasters with scant warning and leaving chaos and confusion in its wake.

Just last year, floods, landslides and incessant rainfall claimed 258 lives and left another 132 people injured. Some 52 remain missing, presumed dead, according to data maintained by the National Emergency Operation Center (NEOC). Likewise, the National Planning Commission estimates that flooding alone caused an economic loss of over Rs 60 billion while more than Rs 70 billion is needed for reconstruction in its aftermath.

Monsoon-induced disaster is a yearly phenomenon, with similar levels of loss of life and property each year. Floods claimed 4,344 lives across the country from 1971 to 2015. In the past seven years alone, floods, landslides and incessant rain accounted for the loss of 1,450 lives. Another 683 people went missing and 823 were injured. If anything, these figures lay bare the government's woeful lack of preparedness for dealing with monsoon havoc.

“Disaster management is our priority. However, for various reasons, we have not been able to reduce disaster risks to the level expected,” acknowledged Joint-secretary Kedar Neupane, chief of Disaster Management Division under the Ministry of Home Affairs. The ministry is directly responsible for disaster relief and rescue.

After every disaster, the general feeling is that the losses may have been minimized had there been timely preventive measures and a strong response mechanism in place. Experts have stressed the growing need to evaluate the authorities' disaster risk reduction (DRR) measures and learn from past failures and successes.

The Himalayan nation has over 6,000 rivers and rivulets, with a total length of around 45,000 kilometers, traversing its mountains, hills and plains. These rivers are vital for agriculture and increasingly for tourism also, but the flip side is the yearly destruction they visit on the land.

Additionally, a history of poor Nepal-India coordination on cross-border dams and embankments has meant inundation in the tarai during every monsoon. The lapse in coordination has led to floods and inundations in settlements around the Koshi barrage, Laxmanpur dam, Kalkalawa embankment, among others. On the other hand, effective cross-border coordination in flood management, such as during the 2014 Rapti floods, helped save countless lives and much property on both sides of the border.

Mass deforestation and rampant exploitation of the Chure range for raw materials have also increased Nepal's vulnerability to monsoon-induced disaster. As a result, residents in both hill and tarai districts, notably Bardiya, Banke, Bajura, Sarlahi, Sunsari and Jhapa, bear the brunt of every monsoon episode.

The Department of Hydrology and Meteorology (DHM) can forecast the weather up to three days in advance. Acting in sync with the weather forecasts, the Flood Forecasting Section of the department forecasts floods through continuous monitoring of river hydrology, rainfall, wind direction and various other factors.

“If a likelihood of flood is detected, we are responsible for issuing alert to places that are likely to be affected. We also disseminate the information to NEOC, the District Emergency Operation Center, the security bodies, the Ministry of Information and Communications and other stakeholders,” said hydrology engineer Sunil Pokharel of the Flood Forecasting Section.

According to him, they can do three-day flood forecasts for the big rivers including Koshi, Gandaki and Karnali. “However, with smaller rivers and gullies, forecasts of only around six to 24 hours are possible, leaving a small window for precautionary measures and evacuation,” he added.

With seemingly smooth communications and coordination mechanisms in place, Nepal’s disaster preparedness may sound foolproof in theory. But with failure to bring down the high number of death tolls, destruction to properties worth billions of rupees and displacement thousands of families, the tangible reality begs to differ.

One explanation for the heavy monsoon toll is the heavy interdependence in the system, according to Dinanath Bhandari, Climate Change and DRR program coordinator at an INGO, Practical Action. “First there is the forecast, then monitoring, data generation, communication, and response and rescue capacity. If anyone of the components fails, the whole system fails to function efficiently,” he said.

Nonetheless, the existing mechanisms have undeniably saved many lives. Flood drills, community shelters and early warning systems, that are seen to in partnership with various NGOs, have helped reduce loss of life and property.

Bhandari at Practical Action, with 13 years of field experience, laid out several points for improving DRR. Efficiency in forecasting, monitoring and communications, increasing the capacity of local communities, increasing public awareness, upgrading response capacity, and mainstreaming DRR into development with sustainability are key, he said. He further stressed the need for coordinated action among multiple actors involved in disaster preparedness and response.

“We have been mostly focused on disaster aftermath and distributing relief. But it's now time to pay more attention to preparedness as well,” he said. With Meteorology Forecasting Division expecting good rainfall this monsoon, the government’s resolve to DRR is about to be tested yet again.

If matured federal republic like Canada still faces inter-provincial trade war, how can we be confident we won’t experience the... Read More...

Coronavirus detected in sewers of Kathmandu Valley
19 hours ago

IN PICTURES: Four cops injured in clash with locals in Khokhana
16 hours ago

Why NCP must not split
23 hours ago

17 houses swept away by landslide in Bajhang, huge human loss feared
21 hours ago