Before classico, Barca must break losing streak at Anoeta 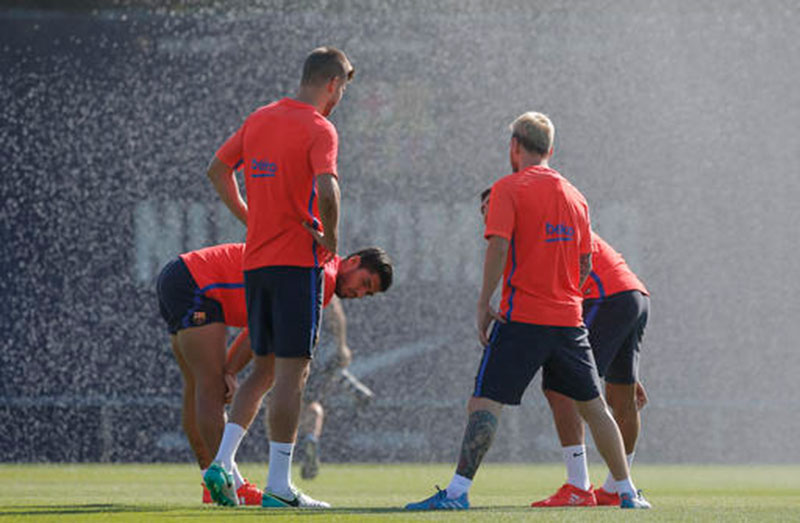 BARCELONA, Nov 25: Barcelona's next two matches will go a long way to making or breaking its Spanish league title defense.

Barcelona hosts league leader and fierce rival Real Madrid in two weeks. But before the season's first classico, Luis Enrique's side must try to break its peculiar curse at Real Sociedad.

Not a particularly daunting ground for most visitors, Anoeta Stadium has proven to be a quagmire for Barcelona.

Barcelona hasn't won in its last six visits to San Sebastian, making the trip to the upscale Basque city on the Atlantic coast one of its most difficult of the season.

Barcelona can ill afford another slip on Sunday, when it plays Sociedad a day after Madrid will try to increase its four-point advantage when it hosts struggling Sporting Gijon.

"It will be a very complicated game," Barcelona star Lionel Messi said of Sociedad. "We will play at a stadium where we haven't been able to win lately and things get complicated. We need to win."

Barcelona lost at Sociedad 1-0 in April, part of a late-season slide which almost cost it the league title. Barcelona needed to win its last match to secure back-to-back crowns.

Sociedad, which won La Liga in 1980 and 1982, has beaten Barcelona in the last four seasons at home, and arrives to the match in its finest form in years.

Coach Eusebio Sacristan, a former Barcelona player and reserve team coach who took over for the fired David Moyes last year, has led Sociedad to its best start through 12 rounds since 2002, when it finished the league runner-up.

Sociedad has risen to fifth place after winning its last four matches, outscoring opponents 10-1. Only Madrid's ongoing five-game winning streak surpasses that. Sociedad has also won four in a row at home, including a 2-0 victory over Atletico Madrid two rounds ago.

"Playing against Barcelona is an added motivation ... and we know what it means to face them," Vela said. "They need to win to not fall further behind (Madrid). This is a stadium where they never feel comfortable, and we will try to keep our winning streak going."

Messi and Luis Suarez will be back after both of Barcelona's top two scorers missed the scoreless draw against Malaga in the last round. Suarez was suspended for accumulated bookings, while Messi was sick. They have eight league goals, matched only by Madrid's Ronaldo.

Messi scored both of Barcelona's goals in its 2-0 win at Celtic in the Champions League on Wednesday.

Barcelona has been better on the road than at home in La Liga, so far. It has won just three of six matches at Camp Nou, and won five of six away.

Besides Madrid, another team that will be pulling for Sociedad is Sevilla. In third place, the Andalusian side can overtake Barcelona in the standings with a victory over Valencia on Saturday.