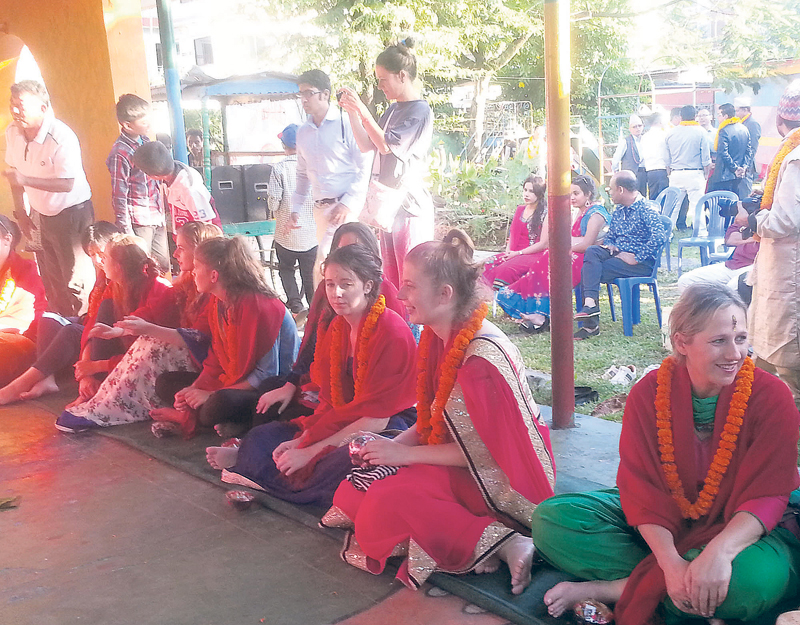 A group of foreign tourists sit in formation for taking part in Bhaitika in Pokhara on Tuesday. Photos: Santosh Pokharel/Republica

“I must consider myself really very lucky. I participated in another warm and colorful Bhaitika this year and it was beautiful,” she said.

She was one of the 55 foreigners from 15 countries who were full of smiles during Tihar celebration organized on Tuesday by the Western Hotel Association (WTA) here. The men and women were very excited about Bhaitika. The association has been organizing such program for international guests since a decade.

“This is a great opportunity for increasing their involvement in our culture. They love to stay longer and come back again and again once they fall in love with the people and culture here,” said Bharatraj Parajuli, president of WTA.

According to him, seven of the 55 foreigners participated in Bhaitika for the second time. “Those celebrating it for the second time are from Holland, Australia, USA and China,” he said. Other tourists were from German, Japan, Spain, Bulgeria, Bangladesh, Switzerland, Korea, UK and Brazil.

For Jastina from Australia it’s her first Bhaitika. She expressed immense joy over the celebration. “I have become fond of Bhaitika. How beautiful celebration of love between brothers and sisters! It’s awesome, it deepens love between siblings!” she exclaimed. “This is my first visit to Nepal and I just loved the timing. I could catch Bhaitika!”

These foreigners were adorned in special attire to match the fervor of Bhaitika. Garland made of marigold and colorful tika after the function added to their beauty.  The guests were put tika by girls and boys from the Rainbow Children Home. After receiving gifts of Bhaitika, the foreigners offered them with Dakshina.

According to the organizer, the foreigner participants had signed up for the program by paying 15 US dollars. During the program they were offered selroti and other sweets and were entertained by deusi and bhailo singers.

“Another beauty of this festival we organize here is that the children from Children’s Home, most of who are orphan, get the opportunity to make relationships with people from another country. That kind of relationship helps them in many ways. They become brother and sisters,” said Parajuli.

Meanwhile, coordinator of the event Rajendra Dhakal stated that the tourists who came to visit Pokhara got ‘Tihar experience’ in bonus. “This is a beautiful thing. They take home unforgettable memories,” he said.

RATNANAGAR, Mar 28: Local conservationists were joined by domestic as well as foreign tourists to clean up the protected zone in... Read More...

SOLUKHUMBU, July 26: Flights at the Phaplu, Lukla and Syangboche airports have been obstructed, following bad weather condition due to... Read More...