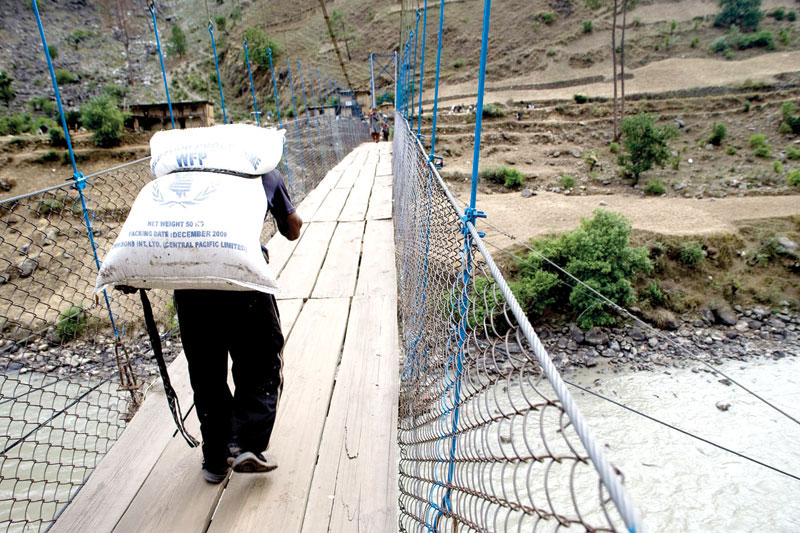 With better transport link between the hills and the plains food shortage in Humla could be eliminated and food be made available at a fraction of the current cost
Late King Mahendra’s most memorable legacy is the East-West Highway that was built during the 1960s. It stretches 1,200 kilometers from Mechi border in the east to Mahakali border in the west. As expected, construction of the highway took about a decade and involved enormous cost. Most of it was financed through grants from India and China, in the hope that the road will help open more bilateral opportunities for trade and travel and expand cultural and social exchanges.

Looking back half a century later, there is no doubt that the highway helped link the two ends of the country; before that, there was almost no link between them and the only option was to travel via Indian territories, which was both inconvenient and costly and, in some way, hurt the national pride.

The new highway proved to be a social and economic marvel for a country that had never been connected by a modern means of transport. Intra-regional travel now came to be counted in number of hours, instead of days.

However, similar opportunity for improving the country’s north-south connections was either missed or intentionally ignored. Nepal is one of the most diverse countries in the world, with a large part of diversity ensuing from the country’s landscape. The southern part of the country, comprised of about a third of total area, is marginally above the sea level whereas its south-north corridor stretches northward to the high Himalayas. This presents an extreme contrast between the north and the south in terms of economic resources and specialization opportunities.

Take the case of Humla. This remote district is situated at the northwest end of the country and borders Tibet region of China. At a distance of 200 km from the flatlands of Madhesh to the south, Humla contains most difficult mountain terrains and most inaccessible population centers located, on average, at 10,000 feet above the sea level. This district has perhaps the coldest climate in the country, with 4-5 months of snowfall every year. The region is unsuitable for any crops and difficult terrain further limits trading opportunities. These features make the region the most sparsely populated and the poorest in the country.

Looking to the south provides a complete contrast to Humla—in terms of weather conditions, ease of travel, and expanded agriculture and trading opportunities. The southern region thus offers a significantly improved opportunity for better life. This contrast, in my view, presents opportunities which so far have been missed.

If there was better transport link between the two regions, food shortage in Humla and adjoining regions could be eliminated and food be made available at a fraction of the current cost. In addition, the southern region would provide potentially unlimited market for specialized products from the north like dairy and horticultural products and more varieties of vegetables. And they will be cheap and of high quality.

Inter-regional travel will flourish, with average temperature difference between the two regions of as much as 50 degrees Fahrenheit. It is then not unimaginable that, with economic progress spearheaded by growth in production and trade, most people can afford vacation homes, with southern families escaping the summer heat and northerners escaping sub-zero summer temperatures for balmy weather in the south. With connections to Tibet, opportunities for trade and travel will multiply, turning Humla into a little Switzerland, a perennial dream of most Nepalis.

More importantly, Humla’s capital Simikot is the gateway to some revered sites for Hindus—Kailash and Mansarovar—that could attract hordes of tourists, from down south but mostly from India.

And some decades into the future, Humla experiment can be repeated at multiple places in the hills to better connect Nepal with both India and Tibet. Besides more interregional trade, a focus on north-south transport links—mostly roads but, in some instances, also railway—will open up vast trading opportunities for Nepal with its two large neighbors, something that could have happened much earlier. This also means that high economic growth taking place in India and China hasn’t yet travelled to Nepal because of its largely closed borders with both its neighbors and nearly nonexistent north-south transport links.

Of course, developing north-south transport system can be expensive. The cost disadvantage, however, will be largely offset by potential gains that would accrue from extreme diversity of climate and resources.

If not cost, what else has held back development of north-south link? All that we get to hear is that extreme topography makes it prohibitively expensive to build infrastructure like roads, railways, electricity and water supply system in hilly areas. This is a valid concern: per kilometer cost of road or railway in the hills can be 3-4 times more than the unit cost in the flatlands of Madhesh.

Again, greater economic benefits and better national integration that development of north-south links will result in would far exceed the initial costs. In other words, there is a compelling case for development of transport links connecting Madhesh and hill regions.

The other reason why south-north development model wasn’t pursued is conjectural but it is strongly believed in the Madhesh region that this happened largely for ethnic considerations. The reason King Mahendra wanted to develop east-west link was partly nationalistic but it chiefly concerned giving hill population the room to expand its habitat by migrating to the south.

And King Mahendra’s dream was realized over the next decades, which saw as much as a fifth to one-fourth of hill population descend down to Madhesh regions and establish permanent homes there. Nothing comparable happened in case of south-north migration, mainly because of the difficulties of movement and lack of opportunities in the hills.

But hurdles to south-north migration were largely man-made. Nor was it that Madheshis didn’t look for opportunities in the north. If north-south links had been developed with the same enthusiasm shown for the East-West Highway, at least a dozen north-south corridors could have opened up to take advantage of opportunities offered by the diversity of regional resources to anchor specialized production and expand trade connections. The absence of a regional model of development based on comparative advantage stymied economic growth and made it harder to unify the country through the promotion of mutually beneficial exchanges.