Barpak rising from the rubble 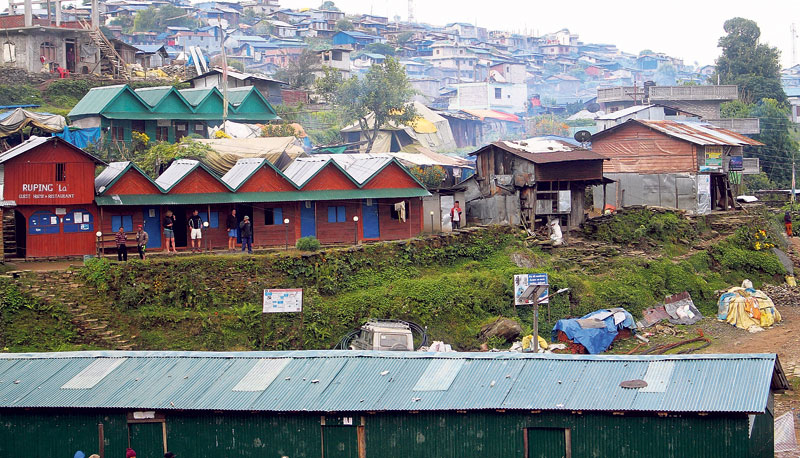 A recent picture of a village in Barpak VDC, Gorkha. Rebuilding process in this area, one of the worst affected by earthquakes last year, has recently accelerated. (Narahari Sapkota/ Republica)

BARPAK (GORKHA), Oct 25: Barpak village development committee in Gorkha, which had lost many lives and houses to earthquakes last April, has started to recover. Increasing number of houses covered with colorful tin-roofs in the hill are making the area’s return to normalcy. Around 1,200 new houses have been reconstructed in the area and many more are underway.
“We are glad to finally start building our new home with the help of the government. It feels much more secure. If we could complete the construction before the winter sets in, we would suffer less,” said Roshani Ghale of Barpak - 4. Along with the happiness, however, these residents still have their fair share of worries.

Money needed for completing the home remains the major problem for most of them. Many including Ghale’s family have received only the first installment, Rs 50,000, of the total Rs 300,000 grant promised by the government. “In lack of the required funds, our efforts to construct our home have been affected. If we had money, we would have completed it by now. Some residents, who had good financial resources, have already started living in their new home as they financed it on their own and now wait for the government to pay them.”

Prior to the earthquake the Ghale family owned a concrete house. As it was completely destroyed by the quake, since last one and half year the family has been living in a tent. “We have been not able to manage funds for completing the construction of the house. Thus, we don’t have option other than to wait for the government to release the remaining amount,” she said expressing hope that the government would do it in time and help the family avoid staying in tents this winter also.

Apart from the delay on the government’s part to release grant amount to the earthquake victims, lack of transportation facility to the affected areas was one of the major reason for the delaye in reconstruction. Ghale said that families who could afford building their house also were also not able to do so in lack of construction material. Earthquakes had badly damaged most of the roads in the district and this had made it impossible for transporting construction materials around the district.

“Some months back it was nearly impossible to acquire construction materials because of the steep cost of transporting costs. The costs were very much above of what people around could afford. Even though the roads have been repaired now and construction materials are coming our way, there is still scarcity in the market,” she said.

Another earthquake victim Tekraj Ghale said that the supply of the construction materials should have been made easier by the government. While bringing the materials from the headquarters, they have to pay double the cost, he complained. “I have brought iron rod and some other materials. Now I’m waiting for labors to get the work done. We would be greatly relieved if the materials were easily available here. I paid Rs 11,000 for just one trip of sand,” he said.

Most of the residents, whose house are still under construction share excitement and concerns. Gopal BK is one of them. Though the foundation stone of his house was laid down by President Bidhya Devi Bhandari on the first anniversary of the earthquake on 25 April this year, his house remains incomplete.  In comparison to others, BK benefited from the President’s act. Few days after the President laid the foundation stone of his house, bank staffs had reached him in person to hand over the first installment of the grant.

BK narrated that nature also obstructed his family’s efforts to build their house. “By now I would have built and shifted my family into new house, but there were problems. It rained incessantly this rainy season. It was near to impossible to work under such condition. Not to mention the shortage of funds,” he said.

“The grant provided by the government is a big support for people like us for rebuilding our lives. We have bought stones with that amount and now wait for other installments to come through so that we can resume construction of our house,” BK’s wife Kumari said adding that the family needs more than the grant amount to rebuild their lives, not just home. She said that her family was looking for ways to meet daily expenses but without a sustainable income source it has been very hard for them to sustain.

Despite the difficulties and a lack of clear timeframe for receiving the remaining grant funds, Barpak residents are resolute on their promise to house their families before the winter sets in this year. “We know we need more funds. And we know that government has its own priority. I don’t know if we are on its priority list. But our family is definitely our first priority and we have to make sure that it gets into a cozy house this winter, at any cost,” Ghale asserted.

Chetprasad Amgai, secretary of the VDC, informed that around 10 percent of the earthquake victims in Barpak have completed the construction of their house. Many others are in the process. “Everyone wants to make a strong house or a concrete house. But only those, whose personal finances are good, have been able to actualize it. Due to lack of funds, poor people are still in a fix,” he said.

Along with houses, new school buildings are visible in Barpak these days. According to Amgai, whether individuals or schools or organizations, everybody is trying to gear up the rebuilding process. “They waited through for one and half year for getting their life back on track. Seems that they finally jumped back and started taking controls of their life and accelerated the rebuilding process,” he noted adding that buildings of health posts, police posts and government offices are also being rapidly constructed.

One of the greatest reliefs here is the restoration of electricity connection. “Barpak never had to suffer power cuts prior to the earthquake. It would always remain lightened. But the earthquake destroyed all the infrastructure and we lived in darkness for months,” said Ghale. “But now our nights are once more bright.”

Rising up from the rubble

All looked up at the cloud-covered sky They knew that something was coming ... Read More...

GORKHA, Jan 29: Reconstruction in Barpak, the epicenter of the Gorkha Earthquake is encouraging as compared to other parts of... Read More...