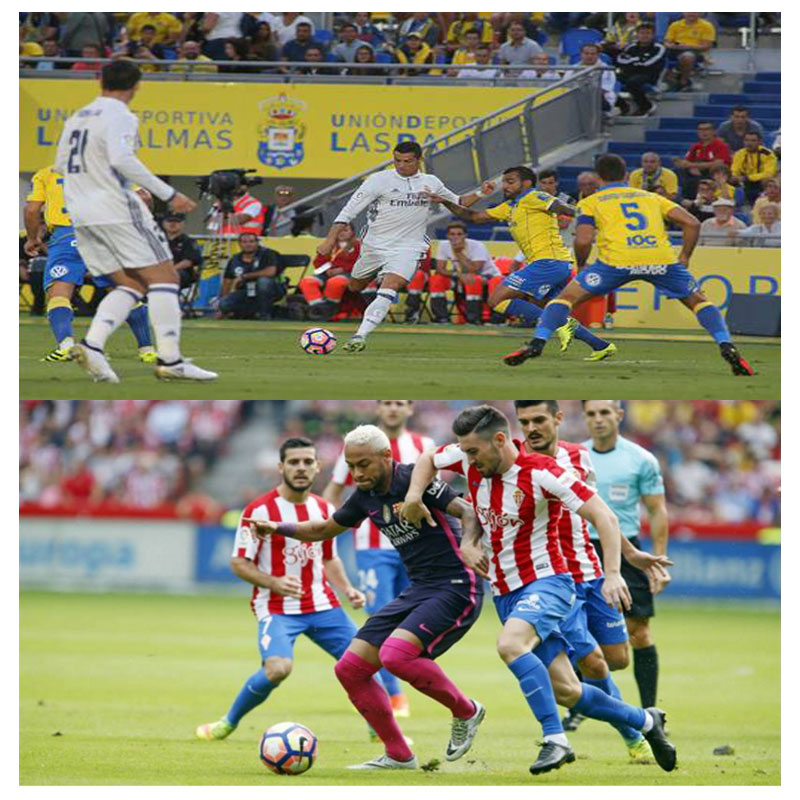 Neymar and Luis Suarez took over in Messi's absence, and by the end of the day Barcelona was only one point behind Real Madrid, which drew at Las Palmas 2-2 after conceding a late equalizer.

Karim Benzema and Marco Asensio scored for Madrid, which twice relinquished its lead.

Neymar scored two goals and Suarez one for Barcelona, while Rafinha and Arda Turan added the others at El Molinon Stadium in Gijon.

Athletic Bilbao won its fourth in a row to be third, two points behind Madrid.

Messi hurt his groin in the draw with Atletico Madrid at the Camp Nou last week, and will miss another La Liga game, one Champions League match, and Argentina's World Cup qualifiers against Peru on Oct. 6 and Paraguay on Oct. 11.

"I have different kinds of players and that gives me a lot of options," Luis Enrique said. "Depending on who we are playing and the players I have available, I'll pick the ones that I think are right for the situation."

Sporting played with 10 men from the 74th as captain Alberto Lora was sent off for a second yellow card after a hard sliding tackle on Sergi Roberto.

Barcelona struggled in the first 30 minutes but took control of the match after the first two goals, and the game opened up even more for the Catalan club after Lora's red card.

"The result doesn't reflect what happened," Luis Enrique said. "It looks like it was an easy win but Sporting played an intense game. The red card changed everything and from then on we were able to score another three."

Sporting, which dropped to 12th in the standings, also lost 5-0 at Atletico Madrid two rounds ago.

Marco Asensio opened the scoring, and Tana evened the match before halftime. Benzema put the visitors ahead again in the 67th, but Araujo's shot ricocheted off goalkeeper Kiko Casilla and twice bounced off the Argentine striker.

"We lost two points that are needed to win the league," Madrid striker Alvaro Morata said. "We had to win this game."

Cristiano Ronaldo, who had a goal disallowed because of offside in the 56th, appeared to be upset by his substitution in the 72nd.

Athletic Bilbao won its fourth in a row.

Mikel San Jose scored in the first half, and Samir Nasri equalized for Sevilla in the 55th, but Mikel Balenziaga put the hosts ahead again in the 66th, and Aritz Aduriz sealed the victory by converting a 90th-minute penalty kick at San Memes Stadium.

Following losses in its first two games, including to Barcelona at home in the second round, Athletic was coming off wins over Deportivo La Coruna, Valencia and Granada.

Sevilla, which was yet to lose after five games, dropped to fourth place.