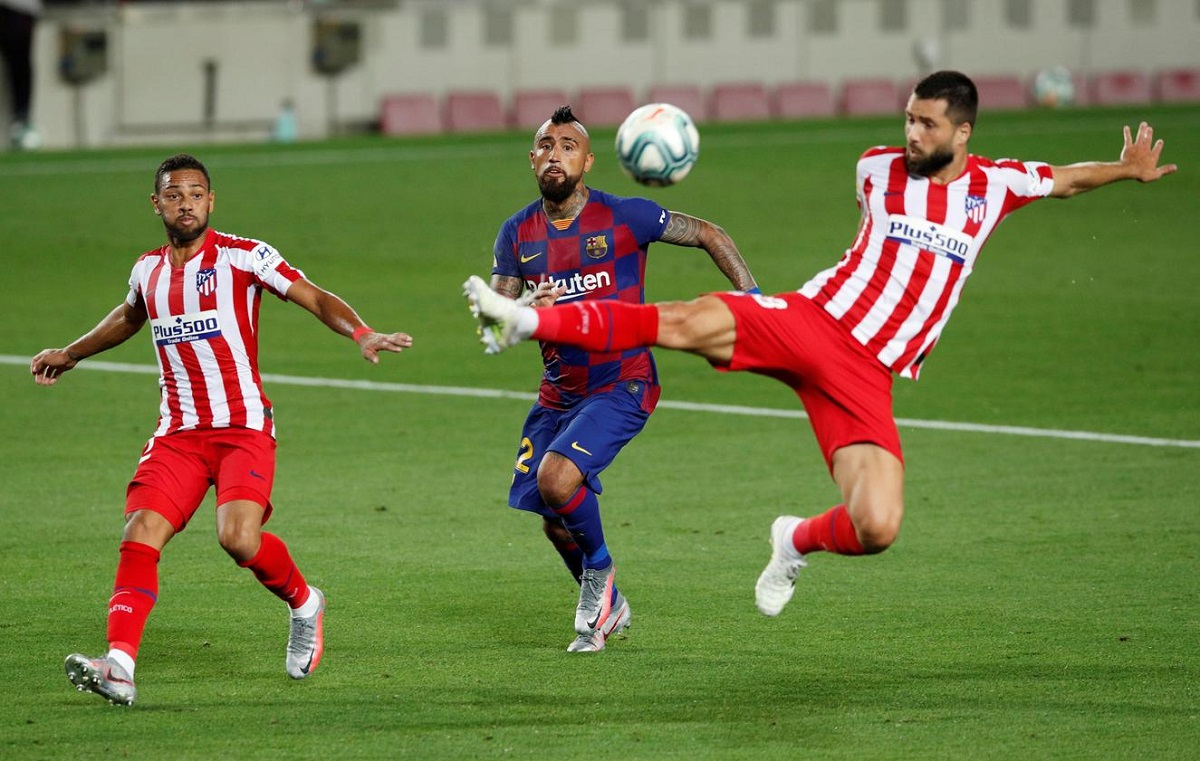 BARCELONA, July 1:  Barcelona gave up more ground to Real Madrid in La Liga’s title race on Tuesday after being held to a 2-2 draw at home to third-placed Atletico Madrid as a late penalty from Saul Niguez cancelled out Lionel Messi’s 700th career goal.

The draw meant the Catalans stayed second in the standings on 70 points and leaders Real Madrid, who have 71, will go four points clear at the top with five games left if they beat Getafe at home on Thursday.

Barca went ahead at an empty Camp Nou in the 11th minute when Atletico striker Diego Costa knocked Messi’s delivery from a corner into his own net.

Saul levelled soon after from the spot after the referee ordered a re-take when Costa’s initial penalty was saved by Marc-Andre ter Stegen who had strayed from his line.

Barcelona then earned a penalty soon after the interval which Argentine Messi coolly converted for a remarkable 700th strike for club and country, only for Saul to strike again from the spot in the 62nd to earn a share of the points.

“It’s a real shame and the league title is looking much harder for us with each game,” said Barca coach Quique Setien, whose side have drawn three of their six games since the campaign resumed after the coronavirus stoppage.

“Dropping these points in reality pushes us further away from the title but we have to keep on working hard.”

The Catalans desperately needed to win after twice throwing away the lead to draw 2-2 with Celta Vigo on Saturday but history repeated itself as Quique Setien’s side failed to sparkle against a determined Atletico who are unbeaten since the season resumed.

“It’s very hard to try and fight for the title when you drop points two matches in a row but we’ll keep going until the end,” said Barca midfielder Sergio Busquets.

As well as defending with their usual steel, Diego Simeone’s side caused Barca plenty of problems down the wings due to the pace of Yannick Carrasco and their man-of-the-moment Marcos Llorente, who is enjoying a new lease of life as a forward.

Belgian winger Carrasco won both penalties for Atletico, out-foxing Arturo Vidal in the first half and then proving too quick for Nelson Semedo.

Saul had sent Ter Stegen the wrong way to score his first equaliser but the German guessed the right way in their second duel from the spot. The ball, however, squirmed through his hands and crept in off post.

Barca coach Setien left former Atletico forward Antoine Griezmann out of his starting team for the second game in a row and turned to the 120-million-euro man in stoppage time, but the Frenchman had barely any time to provide the desired reaction.