Barca pull off the mother of all comebacks 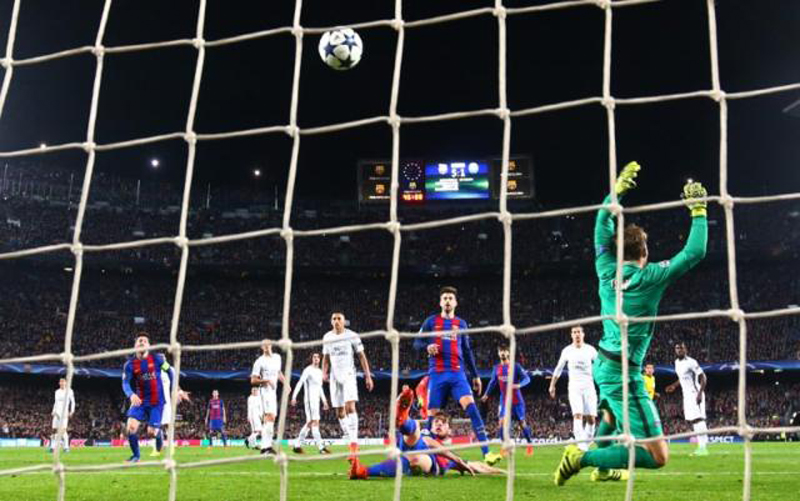 Barcelona completed one of the most extraordinary comebacks in European football history to knock Paris St Germain out of the Champions League on Wednesday with a 6-1 victory that rewrote the record books.

No team had ever overturned a four-goal deficit in a knockout tie, but Sergi Roberto's stoppage-time goal completed a 6-5 aggregate win that sparked delirious scenes of celebration inside the Nou Camp and sent Barca through to the last eight.

Edinson Cavani looked to have wrecked Barcelona's dreams by volleying in an away goal to make the score 3-1 but two late strikes from Neymar set up a thrilling finale before Roberto sealed the Spanish side's unlikely triumph.

"I dedicate this win to all Barca fans who kept faith in us. We were massively criticised after the first leg."

Barcelona began to believe in the impossible dream of clawing back their shock 4-0 loss from the first leg when Luis Suarez headed over the line in the third minute and a Layvin Kurzawa own goal gave them further hope before the break.

Lionel Messi's penalty five minutes into the second period had the Nou Camp on its feet but Cavani's strike in the 62nd was a sucker punch to Barca's ambitions from which Luis Enrique's side took a while to recover.

A curled free kick from Neymar in the 88th minute gave them hope and the Brazilian converted a penalty before substitute Roberto slid in to knock the ball beyond Kevin Trapp from a chipped free kick and send Barca through.

PSG coach Unai Emery, who had been brought to the club in the close season with the express purpose of adding nous to the vast resources of the Qatari-owned outfit and propelling them to success in Europe, cut a dejected figure.

"Barcelona are capable of doing that. It was all or nothing for them in the final minutes," he said.

“It’s a negative experience for me and for the club. We need to learn from it.”

An electric atmosphere gripped the Nou Camp before kickoff after Suarez and Luis Enrique had said they truly believed a comeback was on and the players caught the wave of optimism by swarming all over PSG from the first whistle.

Trapp struggled to cope with the early pressure and flapped at a high ball, allowing Suarez to jump ahead of him and force the ball over the line.

PSG had a penalty appeal turned down when Julian Draxler's low cross struck Javier Mascherano's arm but it was one of few forays forward from PSG in the first half as Barca did all the attacking.

The Catalans owed their second to another piece of slack defending, however, as Iniesta nudged his way past Marquinhos in the area to knock the ball back into the danger zone and it bounced off the swinging leg of Kurzawa and into the far corner.

PSG riled Barca supporters by coming back on to the pitch after the break a few minutes late but the Nou Camp was soon celebrating a third as Messi powered a penalty past Trapp after Neymar had been tripped by Thomas Meunier.

Cavani hit the post but made amends by smashing a loose ball home, although he should have added another but was denied by the feet of Marc-Andre ter Stegen.

At the time it did not look to be a crucial miss but Barca had other ideas, scoring three times in six minutes to complete an incredible comeback.

Mother jumps off the Seti bridge with her children

DOTI, July 21: Three of the four family members who jumped in the Seti River are missing while one has... Read More...

Steely Juventus shut down Barca to kill off comeback hopes

Barcelona's hopes of staging another sensational Champions League comeback fell flat against a hardened Juventus side who held the Catalans... Read More...

Experts' conclusion: Air accidents increased due to lack of full compliance with ICAO standards
25 minutes ago