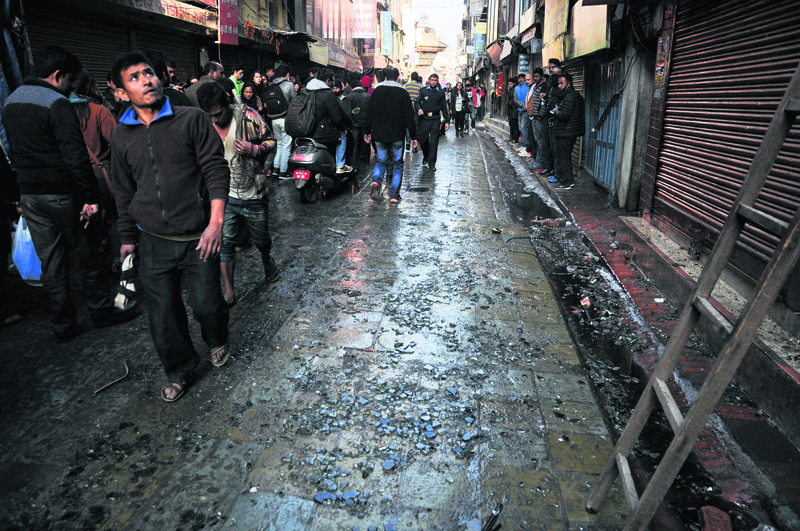 Pratik Rayamajhi/Republica Locals in Makhantole in the old quarter of Kathmandu curiously look after firefighters douse fire in a house on Tuesday. The fire was caused by short circuit, police said. There were no injuries.

KATHMANDU, Dec 28: The recent campaign on banning street vendors along the streets of Ason, Indrachowk and Hanumandhoka has helped to timely control the fire that broke out in a four-storey building in Makhantole of Kathmandu on Tuesday afternoon.

With the joint efforts of Nepal Police, Kathmandu Municipality, traffic police, local clubs and concerned stakeholders, the ban had been enforced effectively since November 15 last year.

According to the police, the mushrooming street vendors in the areas had encroached public land for their use, causing hindrance to pedestrians, tourists and other vehicular movements.

According to the Metropolitan Police Circle, Janasewa, the fire started from the fourth floor of the building and started spreading to the third floor and other adjoining buildings before firefighters intervened. The store of Famous Chelibeti, a sari house, consisted of showrooms from the third floor to the fourth floor was a warehouse, full of clothes that caught fire on Tuesday.

“If we had not banned the street vendors and shops in the footpaths last month, it would have taken more time for fire trucks to reach the spot through the narrow streets of Makhantole,” DSP Santosh Acharya, in-charge of the Metropolitan Police Circle, Janasewa, said.

Within a few minutes after the fire broke out in the L-shaped warehouse of sari and other readymade garments, the firefighters had reached the venue.

“Firefighters remained helpless as they could not find the right place to spray water,” said Raj Kishore Sah, 30, an eyewitness and a shopkeeper based in Makhantole. “After a about 10 minutes of reaching the incident site, they broke the front glass by hitting it with stones from the opposite building,” he said, adding that the fire was under control in about half an hour.

The locals said that they were not expecting the fire to be under control in such a short period as an adjoining building was made of wooden structure. The building was not rescue friendly and lacked adequate entrance to carryout operations, DSP Acharya said.

According to him the cause of fire was yet to be ascertained but the owners have informed the police that the cause of the fire was electric short circuit. The warehouse was closed from outside and no one has been reported to be injured during the mishap. It has been estimated that the fire caused a loss equivalent to Rs 12.5 million.

Five fire-trucks, personnel from Nepal Police, Nepal Army and Armed Police Force were mobilized to contain the fire that started at around 2:05 pm.

KATHMANDU, June 25:One of the main duties of the city police under the Kathmandu Metropolitan City (KMC) office is to... Read More...

Fire under control after 2 hours in Dipayal (Update)

DIPAYAL, April 2: After two hours of efforts, the fire in Pipalla Bazar of Dipayal, has came under control. ... Read More...

Over 10,000 people enter Nepal via Gaddachauki in a week for Dashain
45 minutes ago