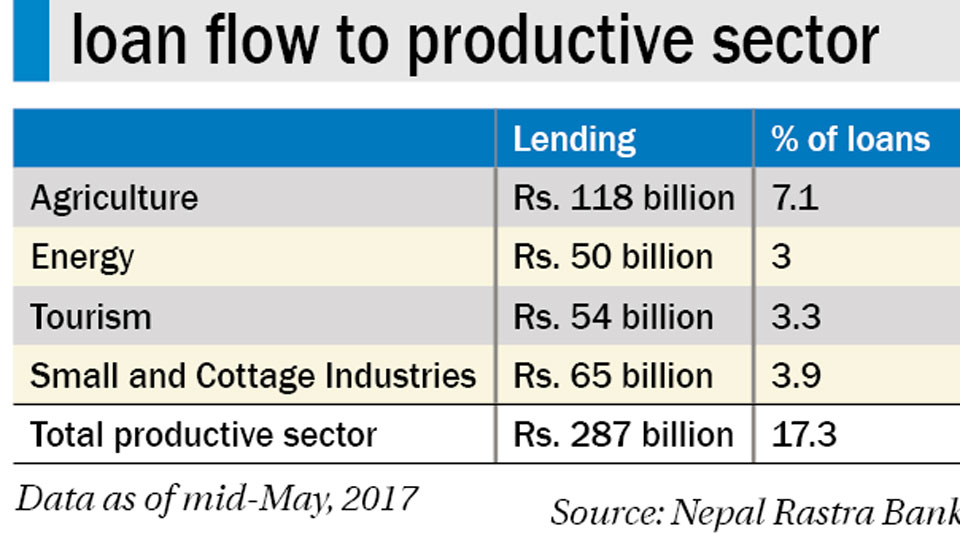 According to the NRB data, banks have lent only 17.3 percent of their total loans in the productive sector as of mid-May, while the minimum requirement is 20 percent.

During this period, banks have floated a total of Rs 1,663 billion in loans, including productive and non-productive sectors. While the data of remaining three months of the last fiscal year 2016/17 is due, NRB officials say that some banks could be short of meeting the productive sector lending requirement.

Through the monetary policy of the last fiscal year 2016/17, the NRB had introduced a rule for ‘A’ class commercial banks to direct at least 20 percent loans in the productive sector with an objective to channelize financial resources on the sectors contributing to economic growth, creating employment opportunities, and promoting import substitution activities to reduce ballooning trade deficit.

According to the directed-sector lending requirement for the last fiscal year 2016/17, a commercial bank must extend 15 percent of their total loans to agriculture and energy sectors combined while the rest 5 percent should be to other priority sectors like small and cottage industries.

The NRB figures show that 28 commercial banks have disbursed a total of Rs 168 billion, or 10.1 percent of total loans, in agriculture and energy sectors combined. This means that banks are short of 4.9 percentage points in meeting lending requirement in these two sectors alone.

Similarly, tourism sector received a total of Rs 54 billion in loans from 28 commercial banks in 10 months of the last fiscal year 2016/17, which is 3.3 percent of the total loans extended by these banks in the period. Banks floated Rs 65 loans to small and cottage industries, another priority sector designated by the central bank, which accounts for 3.9 percent of their total loan portfolio.    The central bank penalizes the banks who do not meet the priority sector lending requirements.

“We monitor banks’ lending figures in every quarter and those banks who do not lend to the priority sectors as required by the NRB face penalty,” NRB spokesperson Narayan Prasad Paudel told Republica.  Paudel, however, declined to name the commercial banks that faced penalty for failing to meet the lending requirement.

By enforcing the directed-sector lending, the central bank wants banks to prioritize their investment on sectors that increase output and discourage speculative investment that creates asset bubbles. However, there are critics including banking executives who argue that such rules kill innovation and efficiency of the banking industry.

Unveiling the monetary policy for current fiscal year 2017/18, the NRB raised the productive sector lending requirement to 25 percent. Now, banks must float 10 percent of total loans on agricultural sector, 5 percent on energy, another 5 percent on tourism and the rest 5 percent on other priority sectors like small and micro enterprises.

The central bank is yet to issue a circular to the banks to execute this policy.

However, the central bank has expanded the definition of the productive sectors which will provide banks some flexibility in extending loans as per the requirement. Now, the central bank has allowed banks to count loans to pharmaceuticals, cement, and garment sectors under the priority sector lending.

KATHMANDU, May 25: Commercial banks are found to be struggling to meet the directed sector lending requirement set by the Nepal... Read More...