Banks' new threat: Their own employees 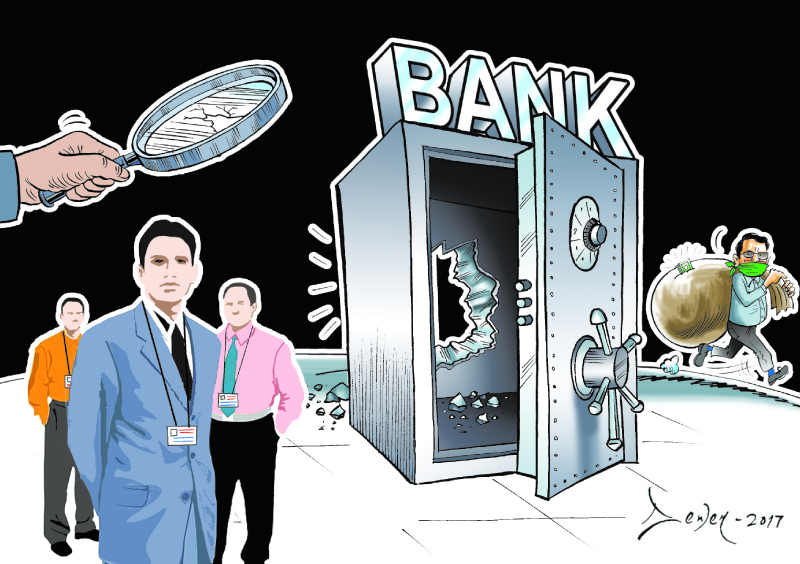 KATHMANDU, June 6: Ravi Chandra Khanal, a branch manager of a development bank collected deposits from various cooperatives and individuals, promising high interests. He never deposited the allured funds in the bank. The bank he worked with - Kailash Development Bank - understood the heist of nearly Rs 20 million only after the former manager of its Lamachaur, Kaski branch, bade adieu to the bank, and had disappeared in the USA.

These cases are only the examples of how the banks are facing the risk of being robbed by their own staff.

Investigation reports have shown that insiders were involved in nine out of 10 major bank robberies in the last five years. Prosecutors say that bank employees -- ranging from junior to senior level -- have been found involved in 90 percent of those bank robbery cases.

While there is no empirical data to suggest the magnitude of losses from operational failures of bank and financial institutions (BFIs), a report entitled 'Financial Frauds: Mitigating Risks' published by Nepal Economic Forum in 2013, compiled 11 major banking frauds carried out in the involvement of bank insiders. The volume of bank frauds of these 11 cases totaled Rs 8.26 billion.

Former Governor of Nepal Rastra Bank (NRB), Yubaraj Khatiwada, sees the involvement of employees, board directors and management in banking frauds and crimes as a key challenge in addressing the operational risk of BFIs.  "While the banking system is stringent on 'Know-Your-Customer' norms, knowing your employees has also become equally important at present," Khatiwada said at a public function while he was the central bank governor. He said that weak internal system of keeping regular tab and preventing lapses has enabled unscrupulous staffers to take advantage of the situation for personal benefits. It has to be strictly controlled to mitigate operational risks, he added.

The frauds from the employees of bank are largely the result of weak operational system within the respective institution, say banking experts. They point out lapses in the internal audit and control system in most of the BFIs that expose them to the vulnerability of crimes and frauds perpetuated by their own employees. For example, a branch is operated by a branch manager where s/he is entrusted with a lot of responsibilities, but not much of oversight and control.

"If I am responsible for input, authorize and checking transactions at a bank branch myself, I may be tempted toward fraud," Parshuram Kunwar Chhetri, a former banking executive, told Republica.  "Many banks have 80 or 90 branch offices each, but they have only four to seven staff members in the internal audit department for the oversight," he said, pointing out the weakness in the internal control and audit function of banking system. "The internal audit sections of majority of the banks are more reactive than proactive. They function only when there is a problem. Instead, it should be proactive to ensure that there is not any loophole left to assist fraud or crime.  We need to improve a lot in this front," Chhetri, also a trainer on corporate governance, said.

Fraud or crime in the involvement from insiders is a part of operational risk in BFIs that can deal a heavy blow if attention is not paid for proper measures to identify and contain risks that emerge from within themselves.

The Basel Committee on Banking Supervision defines operational risk as the “risk of loss resulting from inadequate or failed internal processes, people and systems or from external events."

Nearly half a dozen interviewees including prosecutors, regulators, bankers and experts unequivocally told Republica that losses from operational risk could be far dangerous than the credit risk resulting from bad debt.

"In Nepal, the operational risk could be a tip of an iceberg which looks small from outside, but we do not know how serious it is," said Sanjib Subba, the CEO of National Banking Institute Ltd -- a banking and finance academy.

According to an estimate, a commercial bank in average allocates 92 percent of its capital for credit risk, 7 percent for operational risk and less than one percent for market risk. Banks can recover their losses resulting from credit risks over a period of time as the credit are backed up with collateral, which are fixed assets like land and houses. At least a portion of damage from such losses is recovered. But in operational risks, the whole amount robbed from the bank is the loss. Moreover, the credibility loss and loss in business through the controversy could be sometimes far too much than the direct losses.

Subba, who holds working experience of nearly three decades with various banks, estimates that 90 percent of the financial frauds can be traced back to the internal involvements. "Most of the executives in the BFIs have come from the credit background.

Their focus tends to be on enhancing credit. If you ask staffers within a bank where they are interested to work on, eight out of ten hands will be raised for joining the credit department. So, the operation [department] has been sidelined," he added, noting that operation is the 'heart and soul' of any banking pyramid where the risk is likely to concentrate.

Somewhat different than bank robbery or theft are the cases of financial frauds which are also on the rise in Nepal. However, these cases have been also the result of weak operational system. Most of these banking frauds and crimes are taking places because there is lack of internal control system, weak management of board's oversight and supervision or absence of corporate governance in those banks.

"A  significant  number  of  these  BFIs  have  been  declared  problematic  due  to  cases of  bank  fraud  identified  in  these  institutions.  Further research indicates that the problems have not arisen due to systematic risk, but from individual risk and fraudulent actions undertaken   by   the   management, promoters   or   board   of   directors (BoD) of these BFIs," read the report.

"Despite being a small market, there have been an increasing number of fraud cases.

Fraud cases, especially  in  a  highly  regulated  sector  such  as  the  banking  sector , are  extremely  alarming," concluded the 2013 report that was prepared when the NRB was aggressively pursuing the cases of financial crimes.

However, there has not been any follow-up on the study to find out the current situation of financial frauds.

The temptation to earn quick money could be a major motivational factor for those employees who abuse the banking system or the trust and responsibility that they have been entrusted by BFIs.

Neither the NRB's Financial Stability Reports nor the stress tests of BFIs that are carried out periodically examine the operational soundness of BFIs in Nepal. While the central bank has come up with 'Risk Management Guidelines 2010', which also has a component laying out operational risk management principles, experts say that banks' risk management and control frameworks are not evolving sufficiently to capture the complexities of operational risks.

Another loophole that criminals have been exploiting to abuse the financial system is the technologies like electronic cards, hardware and software that banks use internally and other IT-based services. Recent rise in the ATM theft cases also indicate that the technology used by the BFIs is a weak spot that hackers and criminals can easily attack to steal money from bank accounts.

"It seems that banks have, so far, largely undermined the operational risks which could be counterproductive not only for them, but also pose a serious challenge to the economy if proper measures are not placed in time," a senior official at Central Bureau of Investigation (CIB), who has investigated a dozen of white-collar financial crimes, told Republica on condition of anonymity since he is not authorized to talk with media.

Parties renaming public places after their own

Locals elated after getting facilities in their own local units

PARBAT, Oct 13:  There was time when locals living in villages had to reach the district headquarters even for all kinds... Read More...