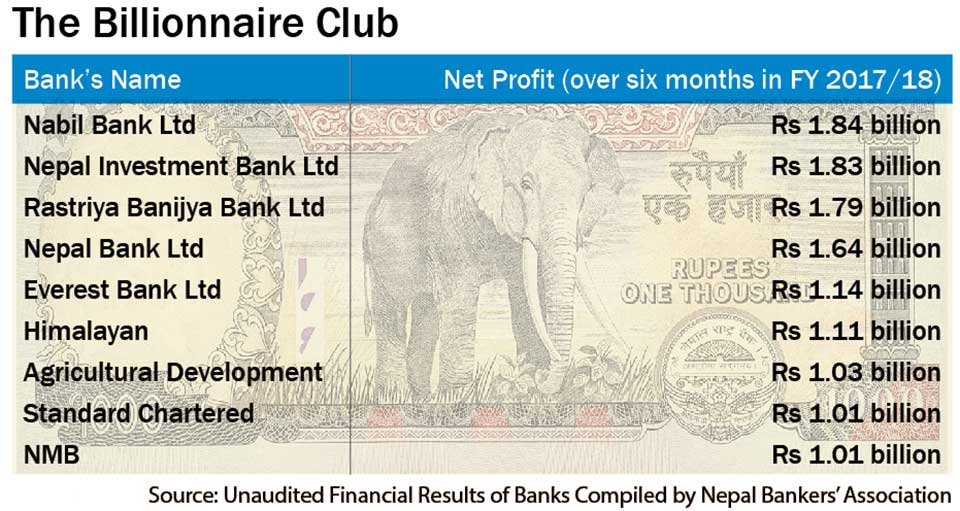 The surge in the net profits fuelled by the rise in the net interest incomes of most of the commercial banks indicates that the shortage of lendable fund did not significantly hit the banks' business, as claimed by their executives.

Everest Bank Ltd, Agricultural Development Bank Ltd, Standard Chartered Bank Ltd, NMB Bank Ltd, and Global IME Bank Ltd were the commercial banks that joined the club of banks whose half annual net profit stood above Rs one billion. Prabhu Bank Ltd, whose net profit had climbed up above a billion in the second quarter in the last fiscal year, however, fell to Rs 635 million.

Bankers say that the rise in the paid-up capital by nearly four-fold has put them under pressure to increase loans and investment. “On the one hand, there is rise in the paid-up capital of banks, which has propelled investment. Also, many banks have written back loans that they had provisioned earlier, which showed surge in profits,” said a banker. “The non-interest income of banks like fees and charges from guarantee, Letter of Credit, and cards have also increased, which also explains the rise in profit in recent time,” he added.

NEA revenue up by 32 percent

MCC will be endorsed only after consensus among major political parties: FM Dr Khadka
19 hours ago