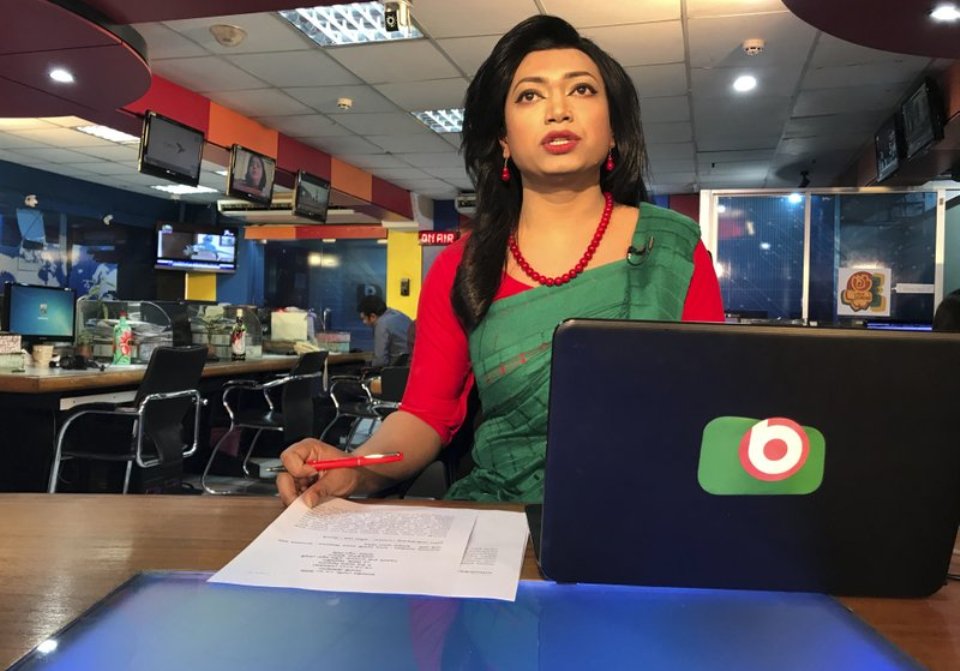 1 of 3 Bangladesh's first transgender news anchor Tashnuva Anan Shishir reads news bulletin , in Dhaka, Bangladesh, Tuesday, March 9, 2021. A Bangladeshi satellite television station has signed up the South Asian county's first transgender news anchor with a hope to remove the deeply-rooted social stigma they face. Shishir, who previously worked as a rights activist and an actor, appeared before audience on Monday after her appointment recently as the day coincided with the International Women's Day. She made the debut by reading a three-minute daily news bulletin on Dhaka-based Boishakhi TV. (AP Photo/Al-emrun Garjon)

Tashnuva Anan Shishir, who previously worked as a rights activist and actress, debuted on Dhaka-based Boishakhi TV on Monday, International Women’s Day. She read a three-minute news bulletin, and after finishing cried as her colleagues applauded and cheered.

“I was very nervous, I was feeling so much emotional, but I had in my mind that I must overcome this ordeal, this final test,” Shishir, 29, said in an interview Tuesday.

Born Kamal Hossain Shishir, she said she found in her early teens that she was stuck in a man’s body and behaved like a woman. She said family members, relatives and neighbors started teasing her and she was bullied and sexually exploited.

She started feeling that it was impossible to continue living and attempted suicide, she said.

The worst thing that happened was that her father stopped talking to her, saying she was the reason that her family was losing face, Shishir said.

She moved from her family’s house in a southern coastal district to live a solitary life in the capital, where she underwent hormone therapy, worked for charities and acted with a local theater group. In January, she began studying public health at a Dhaka university, which she is continuing alongside her job at the TV station.

Bangladesh officially has more than 10,000 transgender people, but activists say the actual number is much higher in the nation of more than 160 million people. The LGBT community faces social isolation, sexual abuse and other forms of harassment. Finding employment is very difficult, and many live by begging or selling sex.

Since 2013, the government of Prime Minister Sheikh Hasina has allowed transgender people to identify themselves as a separate gender. They were given voting rights in 2018.

Some changes are already visible.

Boishakhi TV said it wanted to be part of the changes and has hired a second transgender person in its drama department.

“Our prime minister has taken many steps for the transgender people. Encouraged by such steps, we have appointed two transgender people, We want the attitude of society to change through these appointments,” said Tipu Alam Milon, the station’s deputy managing director.

DHAKA, Bangladesh, Oct 23: Offspinner Mehedi Hasan claimed a Bangladesh test match record of 12-159 as his side secured a first-ever win against... Read More...