Bangladesh sentences ex-MP to death for war crimes in 1971 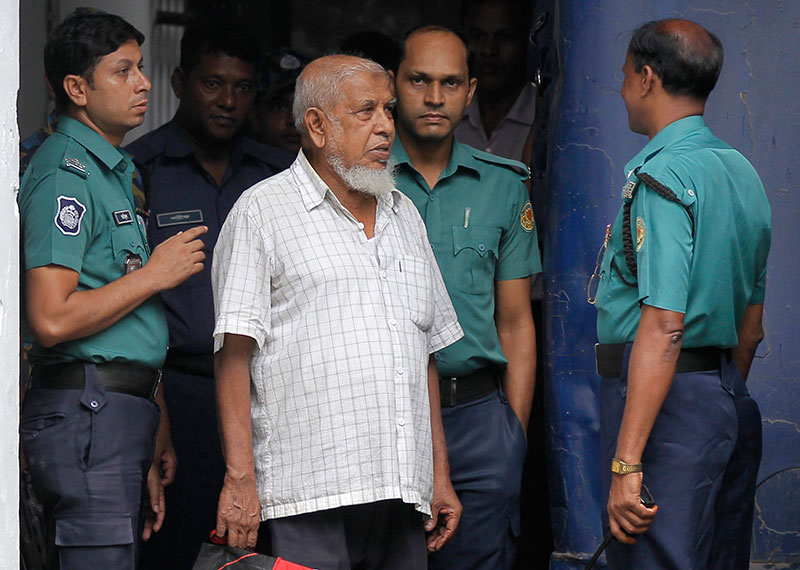 Bangladeshi policemen escort S M Yousuf Ali, third left, after he was sentenced to life until death for his alleged involvement in war crimes in Dhaka, Bangladesh, Monday, July 18, 2016. (AP)

NEW DELHI, Aug 10:  A special tribunal dealing with war crimes committed during Bangladesh's independence war against Pakistan in 1971 on Wednesday sentenced a former lawmaker to death and seven others to life in prison for murder and other crimes.

The tribunal sentenced Sakhawat Hossain, a former parliament member belonging to the Jamaat-e-Islami party, to death on Wednesday. He and one of the other defendants were present in the court. The six others were tried in absentia.

Hossain was a central committee member of Islami Chhatra Sangha, the student wing of Jamaat-e-Islami party at the time, and was accused of acting as a local commander of a group that aided Pakistani soldiers. He left Jamaat-e-Islami and joined the Bangladesh Nationalist Party headed by former Prime Minister Khaleda Zia. At the time of the court case he was involved with Jatiya Party headed by former military dictator H. M. Ershad.

His lawyers said they will appeal.

Prime Minister Sheikh Hasina initiated the process of prosecuting suspected war criminals in 2010 by forming the tribunal. More than 20 people have already been convicted, and five men, mostly Jamaat-e-Islami's top leaders, have been executed.

Jamaat-e-Islami party openly campaigned against Bangladesh's independence in 1971 and formed militia groups to help the Pakistani army crush the uprising.

Bangladesh sentences 10 to death for 2000 plot to kill PM

NEW DELHI, August 21: A Bangladesh court has sentenced to death 10 leaders and activists from a banned Islamist group for... Read More...

Death toll in ferry accident rises to 18 in Bangladesh