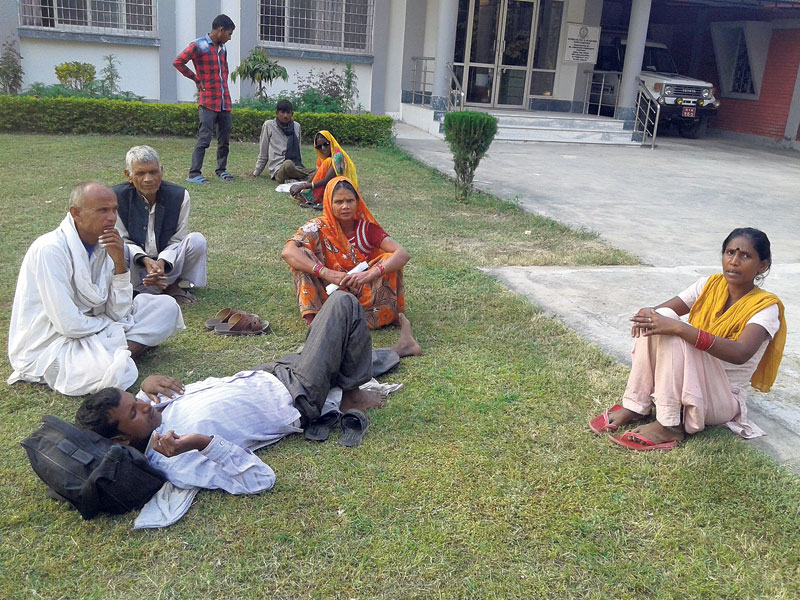 Indian nationals who have brought their kin to the Fattebal Eye Hospital in Nepalgunj for treatment said Thursday that they are now penniless as nobody exchanges their Indian currency notes of Rs 500 and Rs 1000 denominations. (Arjun Oli/ Republica)

Modi said the move was directed at curbing corruption and currency counterfeiting and would bring to light wealth hidden from Indian tax authorities, but its immediate effect has been to cause uncertainty among those dealing in Indian currency inside and outside India.

The market in both side of Rupandehi’s border with India’s Sunaili-Nautanwa used to start getting crowded early in the morning, but since Wednesday they have been wearing a deserted look.

The ban has also affected the daily-wage laborers who used to travel across the border. Locals near the border say they are confused about how to exchange IRs 500 and IRs 1,000 bills.

Ram Kumar Sharma, the president of Siddharthanagar Chamber of Commerce and Industries say the Indian government’s decision has already showed its effect in the markets near the border. According to him, Rupandehi used to record transactions of more than Rs 100 million daily.

Nepal Rastra Bank (NRB) Wednesday directed bank and financial institutions to stop exchanging 500 and 1,000-rupee Indian bills but NRB hasn’t said what is to be done with the now-banned bills. Revati Prasad Nepal, a director at NRB, says a decision will be made soon as NRB officials are in touch with officials of the Reserve Bank of India.

The ban has also affected the import and export of the goods. Traders say the export of some products from the Belhiya border has stopped. Most of the money exchanges in Lumbini are also closed. According to Lumbini Money Exchange Entrepreneurs Association, there are 45 money exchange businesses in Rupandehi.  Gopal Bhandari, the president of the association, says the money exchange counters across the district have a huge stock of IRs 1,000 and IRs 500 bills.

The Indian move has also affected the tourism industry of Rupandehi which is centered around Lumbini.

The number of tourists arriving in Lumbini via the Belhiya border went down in Wednesday and Thursday. Mithunman Shrestha, a hotel operator in Lumbini, says Indian tourist numbers had been satisfactory in recent days, but since the ban it has gone down significantly.

Shrestha says Indian tourists who are already in Nepal have not been able to spend much. Shrestha says the ban will end up affecting Nepal’s economy and the tourism industry will suffer unless a proper decision is made quickly.

CBS announces 47,000 vacancies for enumerators and supervisors to conduct National Population and Housing Census 2021
8 minutes ago

One arrested with pistol in Sarlahi
3 hours ago