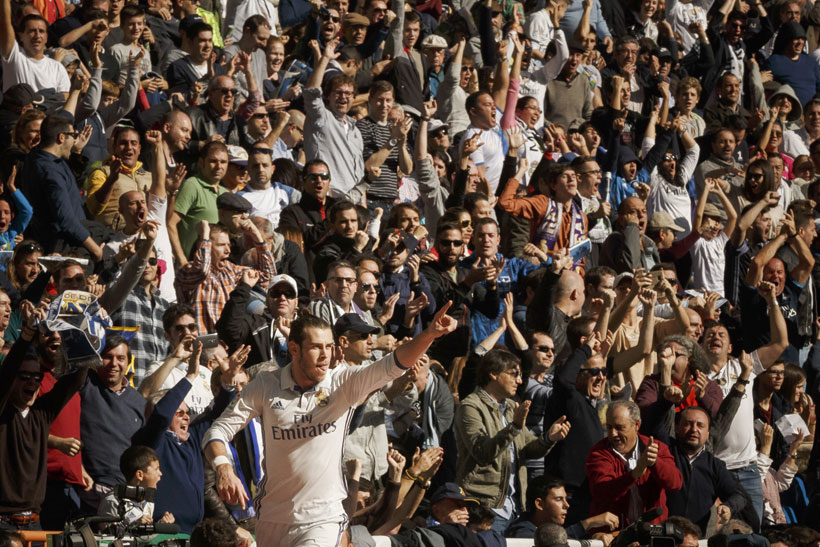 MADRID, Nov 6: With Karim Benzema out injured and Cristiano Ronaldo playing below expectations again, Gareth Bale came through and got the job done for Real Madrid.

Bale scored a pair of goals just before halftime to lead Madrid to a 3-0 win over Leganes on Sunday, securing the Spanish league lead for his team ahead of the city derby against Atletico Madrid.

Alvaro Morata, replacing Benzema in the starting lineup, sealed Madrid's victory with a second-half goal at the Santiago Bernabeu Stadium.

Madrid reached 27 points, five more than second-place Barcelona, which plays at fourth-place Sevilla later Sunday. Atletico, which lost 2-0 at Real Sociedad on Saturday, is currently third with 21 points from 11 matches.

Madrid plays against Atletico at the Vicente Calderon on Nov. 19, following the international break.

Bale dominated the action from the start and was Madrid's most dangerous forward throughout the match Sunday, and his first goal came just as the crowd was growing impatient with the team's lackluster play.

After a perfect long pass by Francisco "Isco" Alarcon in the 38th minute, Bale calmly found the open net after his first attempt was stopped by the goalkeeper.

Bale's second came in first-half injury time after a free kick cross into the area. The ball was deflected toward Bale and he easily hit the net from just in front of the goal line.

Bale also had two great scoring chances early in the second half, first with a close-range shot and then with a header, both requiring difficult saves by Leganes goalkeeper Jon Ander Serantes.

The striker has scored three goals in the last two matches for Madrid. He had also found the net in the team's 3-3 draw at Legia Warsaw in the Champions League on Wednesday.

Ronaldo's up-and-down season continued and he had another lackluster performance at the Bernabeu, where he hasn't scored in five straight games.

Benzema was sidelined on Sunday because of a knee ailment, and replacement Morata got Madrid's third goal from inside the area after a pass by Toni Kroos in the 76th.

Madrid coach Zinedine Zidane brought back midfielder Luka Modric, who entered the match in the 62nd after being sidelined for almost a month following a surgical procedure on his knee.

It was the fourth consecutive loss for Leganes, which was making its first-division debut at the Bernabeu. This is the team's first time in the top flight.

Sunday's loss left the club with 10 points and in 17th place in the 20-team standings, just outside the relegation zone.

KIEV, MAY 27: Real Madrid forward Gareth Bale scored a jaw-dropping overhead kick and a long distance strike to give them... Read More...

MADRID, Dec 1: Enzo Zidane made his dad proud on Wednesday, scoring a goal on his competitive debut for Real... Read More...

In his written response to SC, Dahal says courts can never be influenced by rallies, slogans and speeches
56 minutes ago