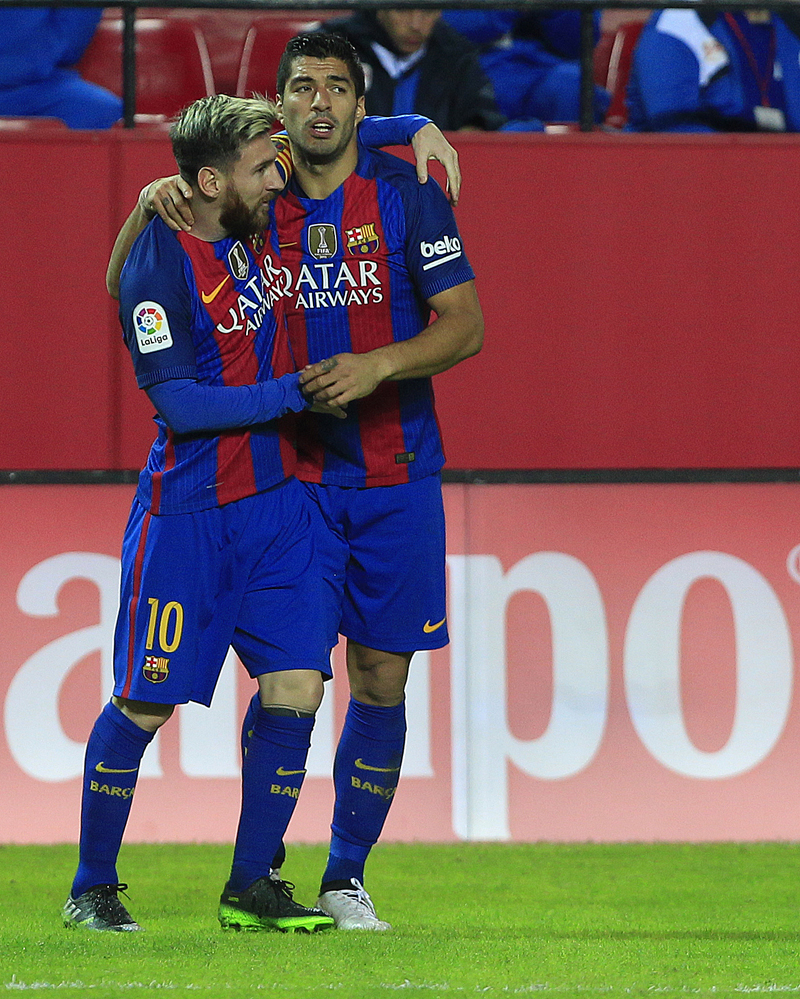 MADRID, Nov 7: With Karim Benzema out injured and Cristiano Ronaldo playing below expectations again, Gareth Bale got the job done for Real Madrid with two goals against Leganes on Sunday. Not to be outdone, Lionel Messi scored his 500th goal for Barcelona as the Catalan club won a thriller against Sevilla.

Bale scored both his goals shortly before halftime in a 3-0 win over Leganes, securing the Spanish league lead for Madrid ahead of the city derby against Atletico Madrid.

Barcelona stayed two points behind Madrid by coming from behind to defeat gritty Sevilla 2-1. Luis Suarez got Barcelona's winner.

Madrid has 27 points after 11 rounds. Atletico, which lost 2-0 at Real Sociedad on Saturday, dropped to fourth place after Villarreal defeated Real Betis 2-0 to move up the standings.

Bale dominated action from the start and was Madrid's most dangerous forward throughout the match at Santiago Bernabeu stadium, and his first goal came just as the crowd was growing impatient with the team.

After a perfect long pass by Francisco "Isco" Alarcon in the 38th minute, Bale calmly found the net after his first attempt was stopped by the goalkeeper. His second came from close range in first-half injury time.

"I'm pleased with the work everyone put in, not any player in particular," Madrid coach Zinedine Zidane said. "There will always be one who makes the difference, but the great thing today was the team."

Bale also had two great scoring chances early in the second half, first with a close-range shot and then with a header, both requiring difficult saves by Leganes goalkeeper Jon Ander Serantes.

The striker has scored three goals in the last two matches for Madrid.

Ronaldo's up-and-down season continued and he had another lackluster performance at the Bernabeu, where he hasn't scored in five straight games, his longest scoreless drought at home since he arrived at Madrid in 2009. Ronaldo, who is set to extend his contract with Madrid until 2021, last scored at the Bernabeu against Sporting Lisbon in the Champions League on Sept. 14.

"I don't think he's worried, he looks good and committed," Zidane said. "It's true he likes scoring goals, especially at this stadium, but he's calm."

Benzema was sidelined on Sunday because of a knee ailment, and replacement Morata got Madrid's third goal from inside the area after a pass by Toni Kroos in the 76th.

Madrid, unbeaten this season, plays against Atletico at the Vicente Calderon on Nov. 19, following the international break.

It was the fourth consecutive loss for Leganes, which was making its first-division debut at the Bernabeu. It is just outside the relegation zone with 10 points.

Messi was the difference again, scoring an equalizer with a well-placed shot from outside the area in the 43rd for his 500th goal forBarcelona.

Messi is the club's all-time leading scorer with 469 goals in official matches and 31 in friendlies.

Not content with that milestone, Messi set up Suarez's winner with a precise pass in the 61st in the back-and-forth game at Sevilla.

Messi and Suarez lead the league in scoring with eight goals each.

Victor "Vitolo" Machin had put Sevilla ahead in a breakaway in the 15th, speeding past a defender after a perfect through ball by midfielder Pablo Sarabia and firing a low shot past goalkeeper Marc-Andre ter Stegen.

It was the fourth straight win for Barcelona, and Sevilla's first home loss in the league this season.

"It's a win that strengthens us as a team," Barcelona coach Luis Enrique said.

Sevilla, which had beaten Atletico Madrid at home earlier this season, was looking for another big victory to establish itself as a top contender after the arrival of Argentine coach Jorge Sampaoli.

Villarreal scored a goal in each half to defeat Betis 2-0 and moved to third place with 22 points, five behind Real Madrid.

Seventh-placed Athletic Bilbao was held to a 0-0 draw at Espanyol for its third straight game without a league win.

Celta Vigo moved to eighth after coming from behind to beat Valencia 2-1 at home. Swedish forward John Guidetti scored Celta's winner in the 77th.

50,000 metric tons of wheat required to address shortage
34 minutes ago