Bajhang women to vote for those pledging to end chhaupadi 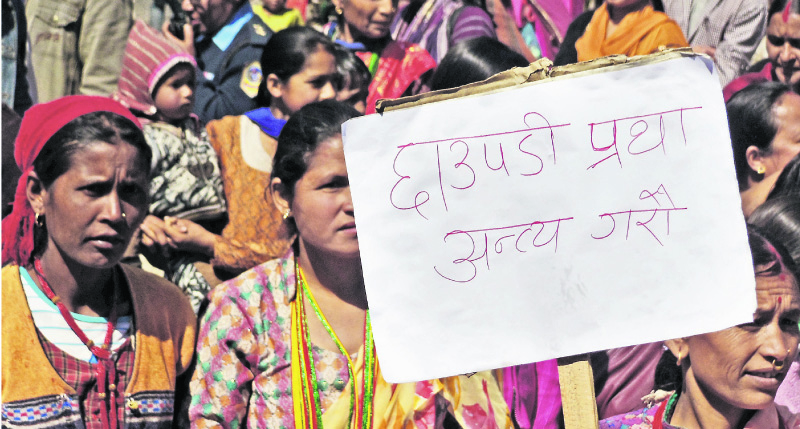 BAJHANG, June 14: Some women in Bajhang have announced that they will vote for candidates in the upcoming local level elections who express commitment to end the tradition of chhaupadi. They have openly forwarded this demand to mayoral candidates of Maoists (Center), CPN-UML and Nepali congress, among other political parties, during the latter’s door to door election campaign.

Kalpana Joshi, an active member of the campaign, said that women in the area have united for the cause and said that candidates who are likely to put an end to this ill culture will be receiving all their votes. “People here are in need of better power supply, roads, drinking water facility, access to health and education, but for us ending the tradition of chhaupadi is very important,” said Joshi, who is a resident of the Prithivinagar Municipality-11.

Bajhang is one of the districts in the far western region where girls and women are forced to stay in an isolated shed called Chhaugoth during their menstruation and post delivery period.

Despite hue and cry raised against the tradition by several government and non government organizations in the last few years, the tradition remains widely practiced across the district, even more religiously in the remote areas. Among others, due to suffocation alone girls and women have lost their lives.

“Candidates have been canvassing but we have humbly requested them that they should first promise to end this culture for us to consider pledging our votes to them,” said Joshi.
Joshi had done love marriage seven years ago. Her husband and family were kind and understanding to her. Even then, she was forced to stay in the shed during her periods. She could not challenge them.

“Our society stands against families who challenge the chhaupadi tradition, so it is important to correct the society’s mindset itself. And this is what we want our new local representatives do when they come into power,” Jayanti Joshi, a resident of Chainpur states. She said that the tradition is deeply rooted in the local culture and that one or two individuals cannot uproot it.

It is not that efforts have been not made in the past to discourage this tradition. In the recent past, these sheds, which are generally erected near cowsheds, were demolished following campaigns against it. However, once the campaigns were over, the sheds started reappearing.

“We don’t know much about what is written in the constitution regarding our rights. For us that does not matters directly. What matters to us is abolishing the practice of chhaupadi. Whoever can get rid of the Chhau sheds and ensure that women sleep insider their homes during menstruation and delivery, will definitely get our vote,” she affirmed.
Joshi reported that the tradition has made women vulnerable to snakes bites, to wild beasts and insects. And in some cases they have been even victim of sexual violence, she asserted.

We women discussed the issue and decided to vote for a revolutionary candidate who can bring about the change that we want, Manumaya Singh of Jayprithivi Municipality confirmed. “Women made this very demand even in the last local level election, 20 years ago. But the promises were not delivered. This time our vote will go to candidate who can completely destroy these sheds,” she added.

Despite such demand from women, only a few candidates have shown interest in responding. “Candidates promise lots of things like providing iodized salt, increasing old age allowance, widening roads and so on but they hesitate to pledge uprooting chhaupadi,” Singh remarked. “When we confront them on this issue and demand their commitment to it, they become speechless,” she added.

Leela Ghale, officer at the district’s Women and Children Office confirmed that the ill tradition is widely practiced across the district and opined that uprooting it is not possible until and unless very effective actions are taken against it. “Women have raised this issue as an important agenda in the election, that is a very welcome sign,” Ghale noted.

RAUTAHAT, Sept 5: Last month, Rautahat faced the severest flood encountered in a number of years. Even after so many days,... Read More...