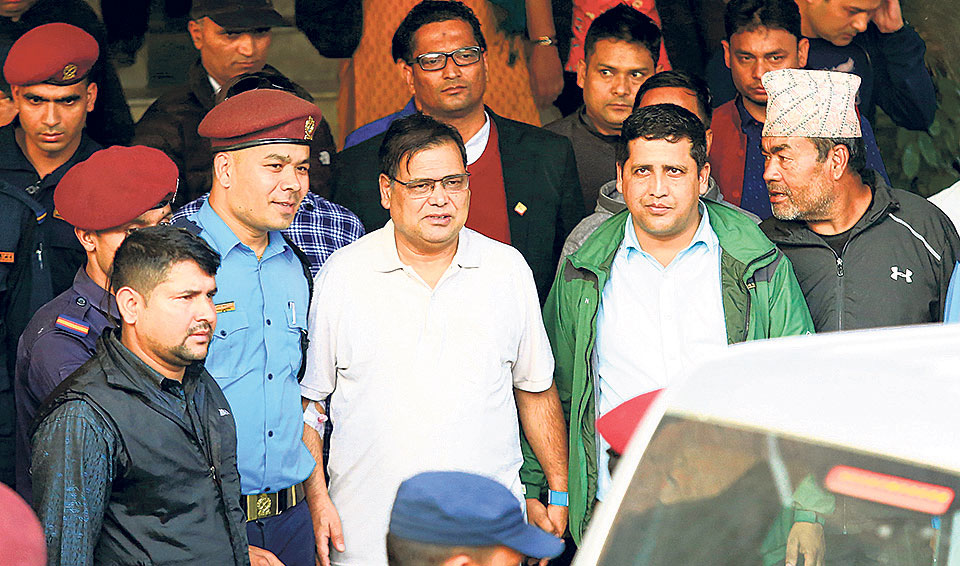 During the Panchey days, it was a badge of honor for our netas of today to be in prison for being courageous enough to fight against the system. They did suffer a lot and were always in danger of being killed by the state. Today, the story is different. We, the people, cannot speak against the same honest netas of yesterday who are now corrupt savages. Instead, when our courts send our netas to prison, our cadres go crazy as if we were sending an honest and respectable person to prison. And when our netas are released, our cadres go crazy once again as if one of our own had gone to mars and have come back home as a hero.

After all, our national comedian, Oli Ba, spent 14 years in the hell hole and when he came out, he was as skinny as one of those marathon runners from the African countries. The good thing about the African marathon runners is that they run for the long run. You need stamina, endurance and perseverance to last such a long run but Oli Ba and all of our netas today don’t think about the long run at all.

Instead, our netas want to be like Usain Bolt but at least Bolt runs without steroids and has broken all records due to his hard work and training. Our netas want to cut corners and if they were to run the 100 meter dash, they would probably want to take the shortcuts instead, like bribing the officials or asking their cadres to pull the legs of other sprinters or even boycott the event itself if they cannot win by any illegal means possible or make deals with other athletes to share the gold medal. Yes, if our netas were Olympians, we would probably have two or three people sharing the gold medal.

Most of our Congressis and the Communist netas did their stint in our jails as they raised their voices against the Panchayat system. Today, the same netas go to prison once in a while for corruption or attempted rape charges or kidnapping. But the most disturbing thing today is that our netas get a grand welcome from their cadres. Either, we, the people, are ignorant fools or our cadres have lost their sense of morality.

We have seen our Congressi netas being sent to prison and when they came out, they were welcomed by their cadres as if they won the Nobel Peace Prize. And just a few days ago, our great communist leader Mahara dai was free to go home and get his perks and benefits back as our lawmaker and former speaker.

Mahara dai was drunk and, yes, he went to meet somebody’s wife when her husband was out of town and something did happen. Well, the court said nothing happened as reported by the media and we believe in our justice system. It’s just that our netas and civil servants have made a mockery of our judiciary that when the court orders a politician to be sent to prison, he is seen hanging around with our Prime Ministers for years until finally he goes to prison and spends a few years and is welcomed back with open arms by his fellow netas and cadres.

Mahara and his fellow maobadis did sacrifice a lot when they waged the so-called People’s War back in the day. Yes, it was very brave of them to wage a war against the state with bharuwa bandooks and eventually even battle it out with our army. Some of us expected Castro and Che and a new system in place once it was all over but we got our own version of Cheech and Chong and we now see our hopes go up in flames.

Baburam has failed us all. Dr Saheb, a new party does not mean joining forces with the same old corrupt Madhesi parties. Prachanda has failed us all. Changing partners just to be in power will not make NCP the greatest communist party on earth and our supreme leader will not get any brownie points for his business deals. We expected Prachanda to be our Mandela or even one of those Latin American rebels turned leaders who never forget their roots.

We expect economic liberalization from our Congressis. We don’t know what to expect from our janjati and Madhesi parties. Rabindra Mishra dai and Ujjwal Thapa needs to figure out how to compete in Nepali politics with the help of money and muscles. And our greatest communist party on earth should throw away the ‘Communist Manifesto’ in our polluted Bagmati river and also tear down the posters of dead foreign communist taukeys.

Show us your true ‘communist’ color. You don’t have to give us liberty or death. Just give us affordable education, health care, and sasto organic vegetables and unadulterated food products. Give us something to be happy about when we see our netas. Mahara is free and will get back to his role as our lawmaker. Mahara dai, you were once a teacher. Your students are now mantris too and the ‘Ropali’ bunch from Mao Inc. are doing pretty good today. Be a great teacher. We expected a lot from you. Please drink moderately. This is a supposedly a free country.

You have been cleared of all charges but please remember those 10 long years of sacrifice you and your party made in hopes of creating a New Nepal. It’s still not too late. We had seen our Congressis and then UML and their nataks. We expected our Maos to do the right thing and they too have failed us miserably. We don’t expect anything better even if our janjati and Madhesi parties form a majority government someday. And no, monarchy is not going to make a comeback anytime soon. So, Modi uncle, do the right thing! At least our so-called leaders listen to you.

Few days ago, a person claiming to belong to ‘banned’ communist party called me for some monetary assistance for his... Read More...

Kaushik Basu has proposed that the law be amended to reflect that giving bribe is legal but taking it is not Read More...

Minister Shrestha announces not to take government facilities
22 hours ago

No decisions taken yet to put off scheduled examinations of Grade XII: State Minister Shrestha
16 hours ago