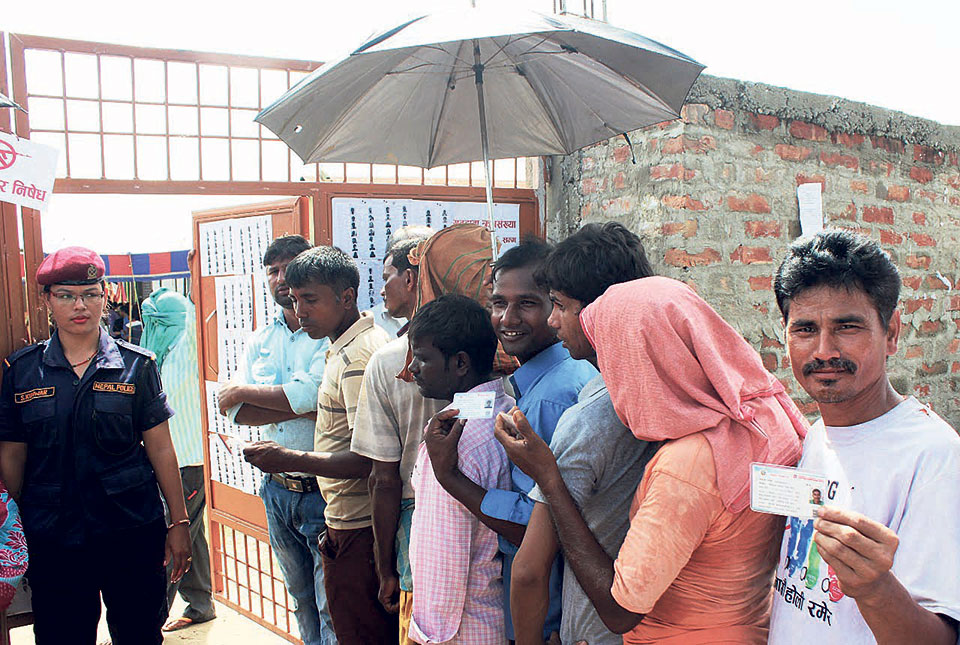 Voters queued up to cast their votes at a polling booth in Birgunj on Monday.

BIRGUNJ, Sept 19: After waiting for years, the locals of Birgunj were dying to exercise their voting right. The voting would start at 7 am Monday but some of the voters could hardly sleep Sunday night due to their eagerness to vote. Unfortunately, it started raining heavily at around 3 am.

Despite the harsh climate, locals lined up in queues at the polling booths. By 8 am, voting had started at all 167 polling booths of the district. Two years ago, on September 19, 2015, the National Trading Center of Birgunj had become a war zone for the thousands of agitators who entered Birgunj from various villages by defying curfew, and hundreds of security personnel who were deployed to control the Madhes movement.

Two years later, a similar crowd gathered at the same place but this time it was for electing the metropolis' new representatives. According to the locals, elections were really peaceful and systematic. Incessant rainfall along with wind had blown away the tents of the polling centers.

However, the police, armies and government officials fixed the tents again. Ram Bahadur Prasad of Bindabasini, ward number 18 of Birgunj Metropolis, said, "I had reached the polling booth at around 8 am and I successfully dropped my vote before 9 am." Outside the polling centers, voters could smell and taste various kinds of sweets and confectionaries which are sold in Bindabasini Mai Fair during Dashain.

Similarly, the voters lined up at Alau Higher Secondary School were sweating due to the soaring heat but they still looked excited. Neither the torrential rain nor the scorching heat could stop the voters from casting their ballots. Forty-five years old Nurayas Khatun of Alau had reached the polling center along with her daughter-in-law who had given birth to a child a week ago.

Though after the birth of the child, Nurayas was taking proper care of her daughter-in-law and not letting her move out of her home, she took her to the polling booth. According to her, election provided a great opportunity to the people to elect their representatives and she didn't want her daughter-in-law to miss this opportunity. "Voting was important," she said.

The high number of security personnel deployed at the election booths tried their best to prevent any kind of untoward incident and were successful in holding doing so. Hence, the election concluded in a peaceful manner despite bad weather.

PANCHTHAR, Oct 25: Fifty four passengers have sustained injuries when a bus they were travelling in met with an accident... Read More...

DHARAN, Oct 25: Kisan Rai, who had been working as a journalist for two decades, died after accidentally falling off... Read More...