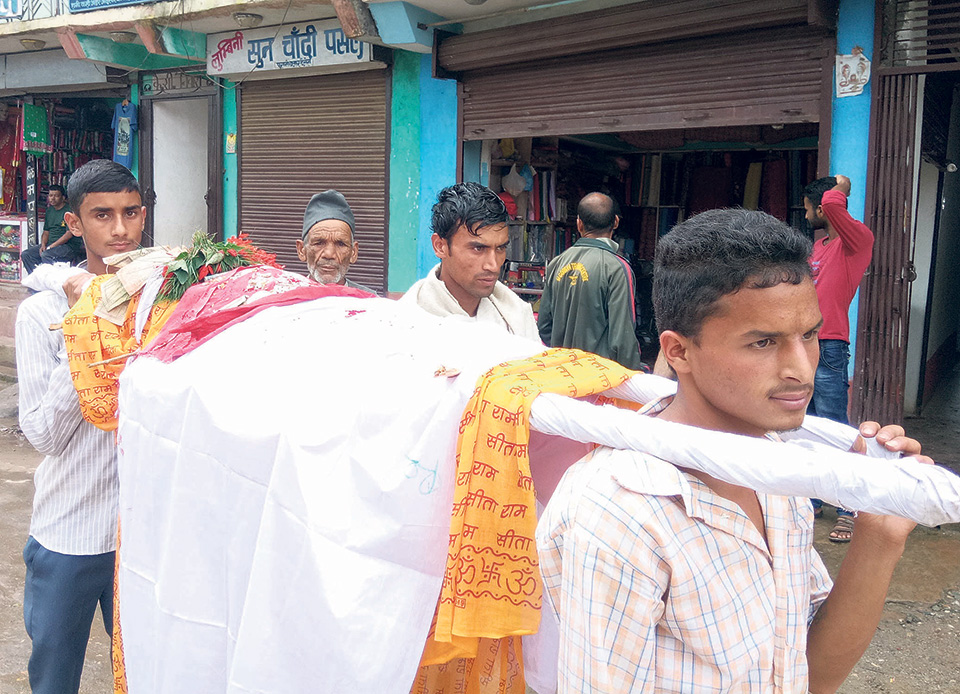 The  body was left in the room. Though his family was Brahmin, cremating the body was not convenient at the time. The Maoist insurgency was in full swing and human rights violations were at their height. Even those cremating the dead or performing last rites would not be spared. “I was not a great believer in such traditional practices myself and it was also  not easy to follow all the proper rituals then,” says Regmi’s widow Ratna. “So we chose to bury the body, which is not our cultural practice,” she added.

The matter was largely settled. Ratna’s son Devendra was 10 years old at the time. Raising him singlehandedly was difficult. She  did  all she could. She had her hands full carrying on with life and not letting the past haunt the present. But then something happened to  her. Four years ago, she started seeing  her husband in her dreams. He would appear to her and ask her to perform the proper death rituals for him. She ignored this the first time. She had the same dream again, and she chose to ignore it again. However, ‘he would not stop coming to her’.

“He would  tell me to follow all the proper rituals. He would plead, and sometimes he would warn or threat me,” said Ratna. “I tried to dismiss  it as just bad dreams. However, I felt helpless when several things started going wrong around the house,” she added.

According to Ratna, she and her son fell ill from time to time. And snakes were coming inside the house a bit unusually. She started to feel  there was some connection with the ‘unsatisfied spirit’,” she said.

Locals believed her story. They said it was indeed the dead that was bothering her. Ratna, a peasant who doubled as a shopkeeper for some time, is also considered a local civil society leader.

“She would share with us about her dream,” said Uma Kanta Koirala, a neighbor who added that she finally had no option but to cremate the body of her late husband.

“During the  Maoist insurgency, there was no question of performing the last rites properly. So he was buried. But when he begun to appear in her dreams, she had to take the right steps,” said Koirala.

Regmi’s  body finally was exhumed  Thursday, on the day of Teej. It was the same day of the year when he was killed 12 years ago. The date was matched carefully, according to Ratna. “We did not want to take any chances anymore. This time I tried to do everything properly.”

When the body was dug  up, there was hardly anything more than the skeleton left.  The remains were wrapped in  saffron and  ritually taken for the cremation. Devendra, the son who is now 22, performed the cremation. The family had already observed the 13 days of kiriya (death rituals). So, the pandit said they did not have to do it again,  according to Devendra.

Over 17,000 were killed and more than 1500 were disappeared during the decade-long conflict.

ROLPA, July 12: Nobody advised her that she should not marry at a young age. Nor did she see anyone in... Read More...

LAHAN, May 2: A 23-year-old woman has lost her life after being severely beaten by her husband at Golbazaar Municipality... Read More...

Construction of transmission line connecting China in limbo
10 minutes ago

Role of Jyapu community in development of agricultural economy is important: PM Deuba
40 minutes ago