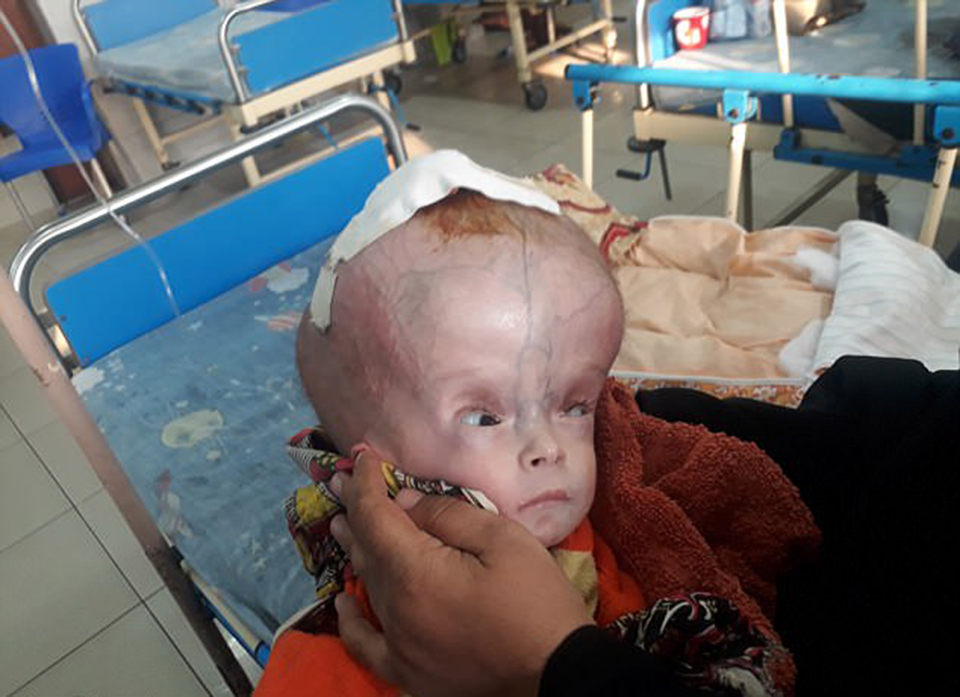 ISLAMABAD, April 3: A baby boy who suffers from a condition that has caused his head to grow to almost the size of a football is awaiting life-changing surgery.

Nine-month-old Muhammad Hammad, from Khuzdar in Pakistan, has hydrocephalus - a build-up of fluid inside sufferers' skulls.

Muhammad's head, which measures 25 inches in circumference, has left the infant immobile and unable to eat or sleep properly.

After Muhammad's parents took their son more than 260 miles by bus for treatment, they were told the youngster is suffering from a urine infection and cannot have surgery until it has passed.

Muhammad's father Shafeeq Hussain, 33, who earns around £100 a month working in a textile factory, worries his family will be forced to return home soon as they are running out of money and his pregnant wife's due date is approaching.

He said: 'Doctors have told us there are [just] remote chances of our son getting normal but miracles do happen.'

Speaking of Muhammad's condition, his mother Rubina Bano, 28, who is seven months pregnant, said: 'He was born a normal child."We were very happy that after six years of marriage finally, God blessed us with a son.Everything was fine but once Hammad turned six months old, his head started growing at an abnormal rate. 'In last three months the condition has caused his head to grow [to] almost the size of a football and we are worried about him."

Muhammad's parents took their son to the Jinnah Post Graduate Medical Centre in Karachi, where he was diagnosed.

Dr Muhammad Lal Rehman, who is treating the baby, said: 'Treatment through shunt surgery is possible although the chances of his head [being] normal are very slim.

'But at least we can protect further drainage of his brain through surgery.'

The delay in her son's surgery has concerned Rubina, who said: 'I'm worried if the surgery [takes a long] time, who will take care of Hammad during and after delivery.

'I pray to God that his surgery is done very soon so that we can go back to our home before my delivery.'

The baby's father is optimistic of a miracle, adding: 'I'm hopeful that God will help us during this hard time.

'I pray to God that Hammad's surgery is done within two weeks because if it takes more time then we might have to take our son back home because I'm running out of money and also my wife is pregnant.'

Iranian baby will be allowed into US for life-saving surgery