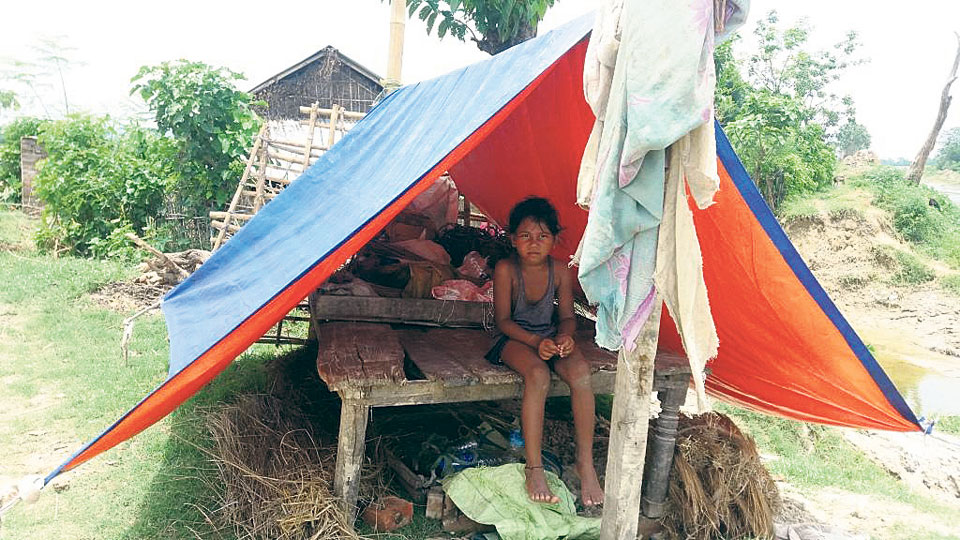 A flood-displaced victim of Bhediya, Saptari under a tent near an embankment in Mainakaderi. Photo: Jitendra Kumar Jha/Republica

RAJBIRAJ, July 8: Massive floods in the district last Saturday have ravaged many parts of district. As per District Administration Office (DAO) estimates, flood has affected around 1500 houses. So far, many of the victims are still deprived of relief.

Every year, locals of Saptari are obliged to struggle with flood. Last year, more than 2500 houses were directly affected by flood. Especially the residents of Southern and north-eastern area of the district are prone to flood. The floods have rendered many homeless while some of them have even lost their lives due to the disaster.

Though concerned authorities are seen active in the aftermath of flooding they have failed to take precautionary actions that would avert residents from becoming victims, complain locals.

“There is lack of proper planning and preparation to minimize flood risks. Because of that innocent locals have to struggle for their lives every year,” said Jogendra Bhagat, chairperson of the Nepal Red Cross Society (NRCS), Saptari. “Flood is not a new problem in Saptari. It is a problem which affects our lives every year.  So it will be better if we find out effective measures to mitigate flood risk. But we lack such measures,” Bhagat added.

It is not that concerned authorities have not made such plans. In 2009/10, the District Disaster Relief Committee had released a work plan to mitigate risks from flood with the help of various non-government organizations. But so far it remains limited to paper. In 2010/11 UNICEF with the help of District Coordination Committee (DCC) formulated a plan for minimizing the risk of flood but the recent flood shows that the plan was not effectively implement.

“Even after knowing that we are prone to floods, why are we waiting for it to come rather than putting measures to cope with it, “said Bhagat. The District Disaster Relief Management Plan notes that 36 VDCs of the district are at high risk and 33 VDCs at minimal risk. So, around 44,000 families of 69 VDCs are obliged to spend their monsoon in fear of being swept away and water logged.

Dinesh Yadav, former chief of District Development Committee, said that the residents of the district are compelled to bear heavy loss of property and lives due to the negligence of government. “Though the floods have incurred huge loss of life and property to the district's residents, the government remains indifferent to the situation,” he said. One of the many factors behind the flooding is the Indian embankment along its border.

Chief District Officer, Krishna Bahadur Katuwal claims that the authority has been working towards mitigating the effects. “We had taken measures to minimize the effects of floods, but we failed to do so as it is not in our hands to control a natural disaster,” he said.

Fear of floods looms large for locals of Saptari

RAJBIRAJ, Jan 24: Water is hardly seen in Khado River except during the monsoon. During rainy days, it swells and... Read More...

Authorities say no further threat from Koshi in Sunsari and Saptari

Floods hit over a dozen settlements in Saptari