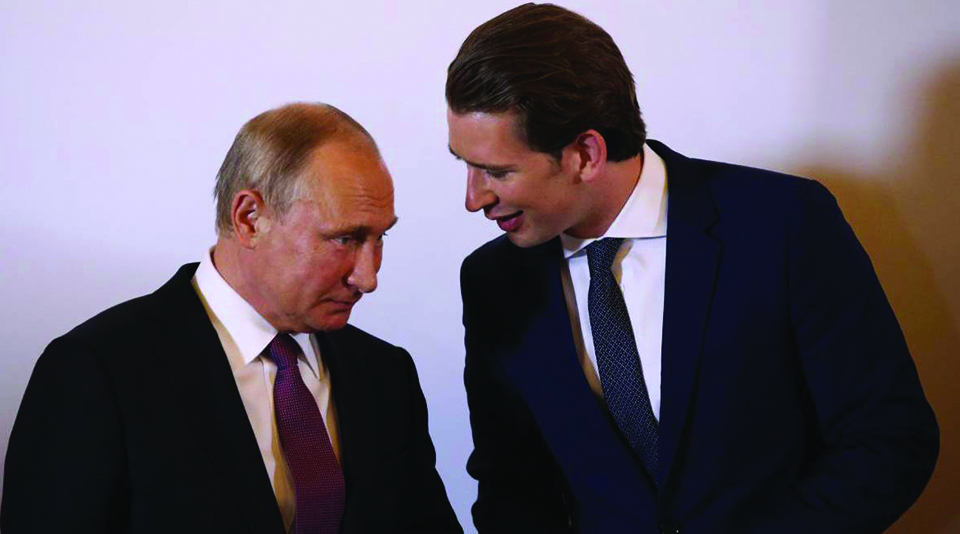 Charles Tannock is a member of the foreign affairs committee of the European Parliament.
news@myrepublica.com

Brexit, after all, is as much a Kremlin project as it is anyone else’s. Putin wants to divide Europeans, and in the UK, Brexit has succeeded in dividing Britons

LONDON – Across Europe, the looming European Parliament elections have long been viewed as the biggest showdown yet between populism and Europe’s established democratic parties. The collapse of Austria’s government has now revealed just how high the stakes are. The question every European democrat of the left, right, and center must now ask themselves is whether the true scope and scale of the political, moral, and material corruption of Europe’s far-right parties, as revealed in Austria, have been discovered in time.

Austria has been ruled since 2017 by a coalition government comprising the Austrian Peoples’ Party (dubbed the Sebastian Kurz list, after the party leader and current chancellor) and the Freedom Party (FPÖ), founded by ex-SS officers in the 1950s. The release of a video by two of Germany’s leading news outlets, Der Spiegel and Süddeutsche Zeitung, has ruptured the coalition, and a new election has been called for this September.

The video was breathtaking, as it showed a louche Vice Chancellor Heinz-Christian Strache, the FPÖ’s leader, drinking heavily and promising government contracts to a woman who claimed to be the niece of a Russian oligarch. In exchange for her buying Austria’s most popular newspaper, Kronen Zeitung, and flipping it into the FPÖ camp, Strache offered to arrange for the woman to secure contracts to build roads in Austria at inflated prices. Yet Strache’s corrupt purposes didn’t end with his proposed assault on Kronen Zeitung. The FPÖ’s real goal, he said, was to accomplish in Austria what Hungarian Prime Minister Viktor Orbán has achieved in his own country: turn the media into pliant supporters of his party.

Kurz’s blithe willingness to turn over control of the defense and interior ministries to the FPÖ when forming his coalition government attests to how reckless too many European leaders have been in the face of mounting evidence that Europe’s far-right populists are keen to do Russian President Vladimir Putin’s bidding. The FPÖ’s pro-Russian activities, and the links between Strache and the extremist Identitarian movement, were well known at the time Kurz cut his deal with the FPÖ. And yet, shockingly, Kurz simply closed his eyes and handed the FPÖ control over some of the country’s most sensitive ministries.

It must have taken great effort to maintain such blindness, as one of the FPÖ’s first actions on gaining control of the interior ministry was to mount a raid on Austria’s security services, which had a long and effective record of keeping tabs on neo-Nazi and pro-Russian organizations. Since then, other EU member states’ intelligence agencies have reportedly avoided sharing information with the Austrians, for fear that anything shared would soon be passed on to the Kremlin.

Austria’s politics is now in turmoil, and its partners in Europe can no longer trust its government. A similar breakdown in trust has been occurring where Italy is concerned, owing to the participation of Deputy Prime Minister Matteo Salvini’s far-right League party in its government. Since joining a coalition government with the Five Star Movement (and gaining control of the interior ministry), Salvini has become Putin’s greatest champion in Europe, leading the attack on the sanctions imposed on Russia for its invasion of Ukraine and defending its illegal occupation and annexation of Crimea. As with Austria, Western intelligence services have been keeping a wary eye on their counterparts in Rome.

These parties are not alone. Europeans have long known that Marine Le Pen’s far-right party (renamed the National Rally in 2018, in an effort to shroud some of its past) has borrowed in the past from a Russian state-connected bank. And British investigators are looking into the role that Russian money may have played in encouraging the pro-Brexit campaign, which suggests that Russian influence in the UK could grow markedly after Brexit. The great irony now is that the Conservative-led government, which has been among Europe’s most forceful in confronting Russia’s attempts to subvert the EU and individual European governments, is facing additional challenges post-Brexit.

Brexit, after all, is as much a Kremlin project as it is anyone else’s. Putin wants to divide Europeans, and in the UK, Brexit has succeeded in dividing Britons like nothing since the Corn Law debates almost 200 years ago. Putin wants the EU to fragment, and Brexit is causing the biggest crack yet in the bloc’s history. Putin wants to sow doubt about the legitimacy of traditional news sources; pro-Brexit media consistently promote lies as truth and inveigh against reputable papers like the Financial Times as elitist enemies of the people.

The crisis in Austria is a wake-up call for Europe’s leaders and citizens alike. The populists’ corruption and subservience to Russia are now clear for all to see. In this week’s European Parliament election, Europe’s voters will have the opportunity to demonstrate that they have seen through this plot against their countries and the EU, and to turn back the populist fifth column where it counts: at the ballot box.

Charles Tannock is a member of the foreign affairs committee of the European Parliament.