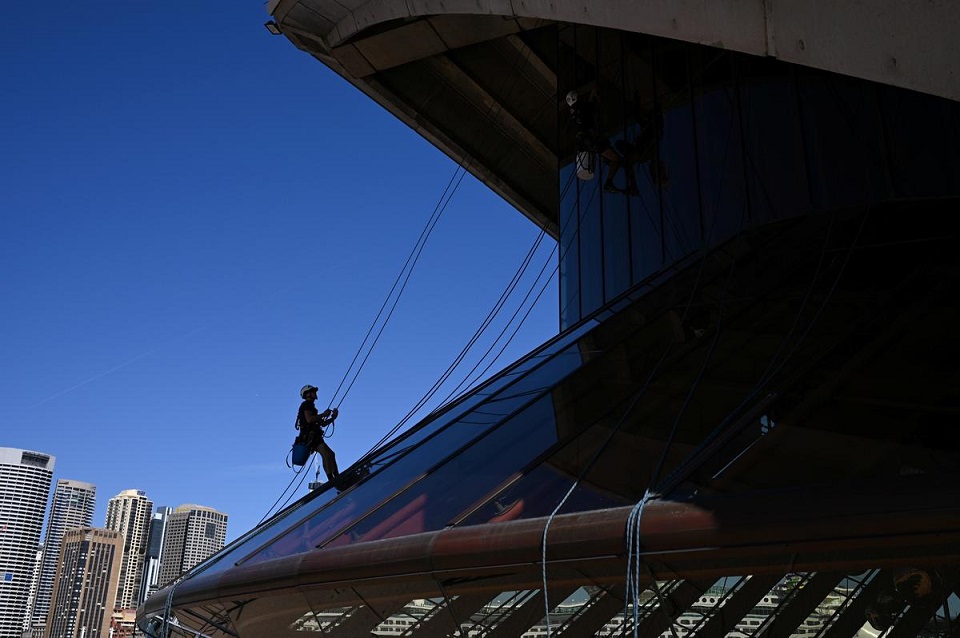 Workers clean windows on the Sydney Opera House, where scheduled public performances have been cancelled due to the coronavirus disease (COVID-19), in Sydney, Australia, March 18, 2020. REUTERS/Loren Elliott

SYDNEY, March 18: Australian Prime Minister Scott Morrison on Wednesday declared a “human biosecurity emergency” and said the country’s citizens should abandon all overseas travel because of the coronavirus epidemic that he warned could last at least six months.

The formal declaration gives the government the power to close off cities or regions, impose curfews and order people to quarantine, if deemed necessary to contain the spread of the virus.

The upgrade in official advice to an unprecedented “Level 4: Do not travel” to any country in the world, was accompanied by a ban on any non-essential indoor gatherings of more than 100 people.

“Life is changing in Australia, as it is changing all around the world,” Morrison said during a televised news conference. “Life is going to continue to change, as we deal with the global coronavirus. This is a once in a hundred year type event.”

Australia has recorded more than 500 coronavirus infections and six deaths, a relatively small number compared to other countries, but officials are growing increasingly concerned about the prospect of an exponential rise in cases.

New South Wales, the country’s most populous state, reported its biggest one-day surge in new cases on Wednesday, along with the country’s latest death, an 86-year-old man who died in a Sydney hospital.

Morrison said the tighter ban on indoor social gatherings, down to 100 people from 500 people, did not include essential services like schools, public transport and shopping centres.

The Australian leader cited expert health guidance as the rationale for keeping schools open, a strategy that has been questioned by some experts. Several private schools have made the unilateral decision to close ahead of the upcoming Easter break.

Morrison reiterated the need for social distancing and good hand hygiene to curb the spread of the virus and announced restricted access to aged care homes.

Anybody who travels during a Level 4 ban is warned that the Australian government may not be able to assist if they get into trouble while abroad, according the government’s official SmartTraveller website. It also recommends people already in a “do not travel” area consider leaving.

Shortly before Morrison’s statement, the government unveiled a A$$715 million (354.35 million pounds) aid package for airlines, including waivers on domestic air traffic control fees. Virgin Australia Holdings Ltd has suspended all international flights from March 30 to June 14, while Qantas Airways Ltd has cut its international capacity by 90%.

The widening restrictions on travel and domestic movement are expected to take a significant toll on Australia’s tourism, retail and entertainment sectors.

Economists are predicting the country will slip into its first recession in nearly three decades in the first half of 2020, prompting a rapid jump in unemployment.

The expectations have weighed on Australia’s financial markets, with the local share market falling more than 6% on Wednesday. Earlier this week, the Australian share market posted its biggest one-day loss since 1987.

Morrison has already flagged a stimulus package worth around A$17 billion and said on Wednesday the government was “considering quite extensive further economic measures” to dull the impact on the economy.

The Reserve Bank of Australia this week pumped liquidity into money markets and said it will make a monetary policy announce on Thursday at 0330 GMT.

However, while the epidemic is expected to crimp consumer spending in the long run, data from the official statistics agency released on Wednesday showed a 0.4% rise in retail sales in February as people bought up staples in preparation for shortages.

They have also introduced exclusive shopping sessions for the elderly and the disabled early in the day, when stores have been restocked.

Morrison issued blunt advice on Wednesday that the hoarding was unnecessary and counter-productive.

“Stop doing it. It’s ridiculous,” he said. “It’s un-Australian, and it must stop.”