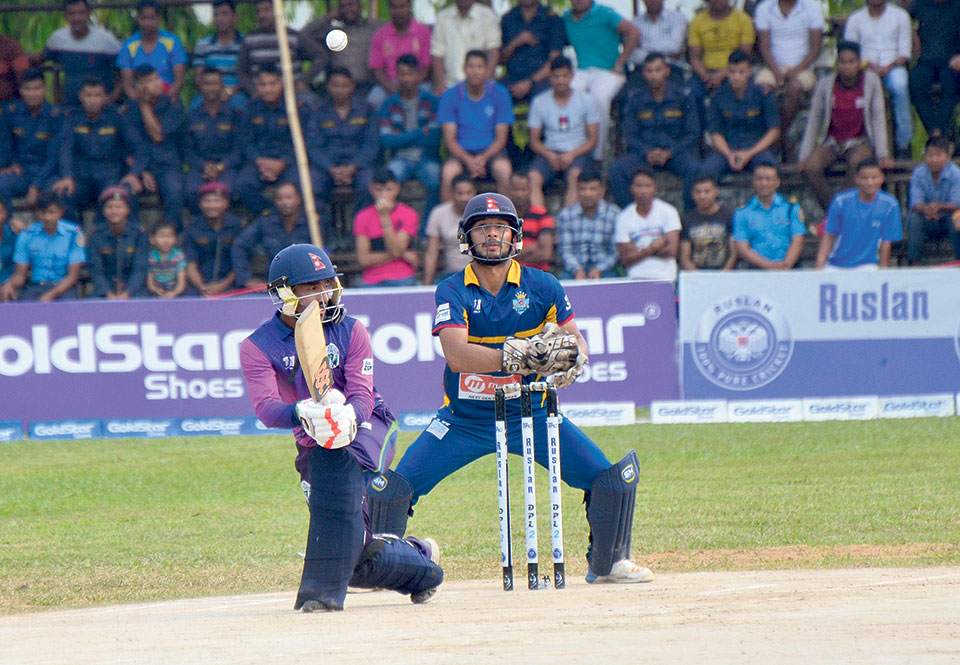 DHANGADHI, April 8: CYC Attariya has secured a playoff spot of the ongoing second Dhangadhi Premier League with a six-wicket win over Biratnagar Kings on the last day of the league phase round on Sunday.

Attariya, who had three points and was a point behind Biratnagar going into the game, managed to book the fourth place for the playoffs. Biratnagar finished fifth and got knocked out of the league phase, along with Rupandehi Challengers.

Attariya won the toss and elected to field first. The opponent Biratnagar gave it a target of 55 runs for the loss of three wickets in six overs in the rain-affected match at the Seti Zone Police Cricket Ground. In reply, Attariya chased the target in 5.4 overs for the loss of four wickets.

Hong Kong captain Babar Hayat and Anil Kumar Sah started for Biratnagar, with the latter hitting 15 runs off 12 runs including two sixes, while Hayat scored 14 runs off seven deliveries which included a four and a six. Likewise, Dilip Nath hit not-out 15 runs off nine balls with a six and a four, while captain Paras Khadka added nine runs off eight balls. Pawan Sarraf did not get to face a single ball despite being on the pitch.

Kamal Singh Airee was the pick of the Attariya bowlers as he pocketed two wickets giving away 18 runs in the two overs he bowled. Similarly, Shuvankar Urao picked up a wicket giving away nine runs in an over.

Despite Attariya’s openers failing to leave their mark in the match, the following batsmen Dipendra Singh Airee and Indian recruit Vipin Chandra played brilliantly to successfully chase the contest. Chandra scored 26 runs off 13 balls which included five boundaries, while Airee hit 20 runs off 15 balls including two sixes. Openers Gaurav Chitkara went for a duck, while Kushal Bhurtel added four runs off three balls with a four. Likewise, Aakash Thapa contributed a run, while Sandeep Jhora went back to the pavilion for a duck.

For Biratnagar, Ramnaresh Giri and Khadka took two wickets each. Giri bowled two overs giving away 23 runs, while Khadka bowled 1.4 overs giving away 14 runs. Chandra was named the man-of-the-match and was rewarded with Rs 10,000.

Earlier, in the other match played on the same day, table topper Kathmandu Goldens and Mahendranagar United shared a point each after the match was abandoned due to rain without a single ball being bowled.

DHANGADHI, April 8: Team Chauraha Dhangadhi has moved closer to the playoffs of the ongoing second Dhangadhi Premier League with a... Read More...

Govt decides to reduce tax on petroleum products
10 minutes ago