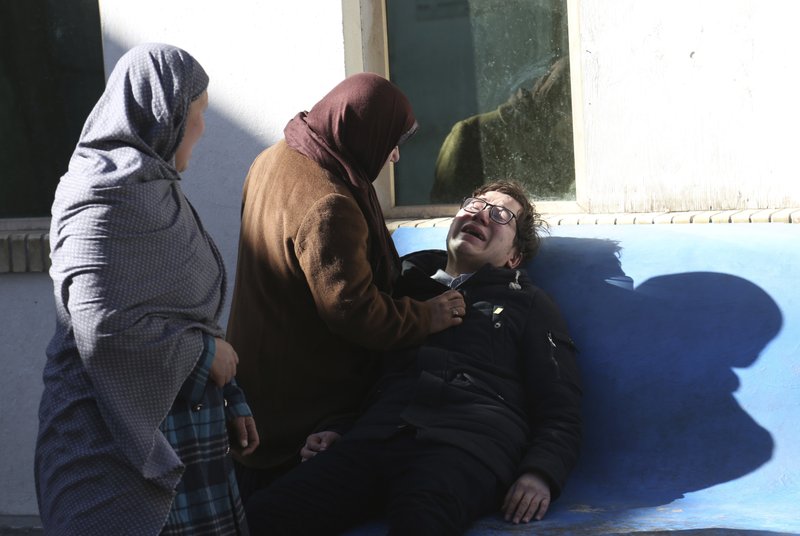 Interior Ministry spokesman Najib Danish said an unknown number of suicide attackers set off an explosion outside the center before carrying out an attack inside. They set off explosive devices in the basement of the building where scores of people had gathered to mark the December 1979 invasion of Afghanistan by the former Soviet Union, he said.

Shiite leader Abdul Hussain Ramazandada said witnesses reported at least one suicide bomber sneaked into the event and was sitting among the participants. He exploded his device and as people fled more explosions occurred.

The two-story cultural center is located in a poor area of the Shiite-dominated Dasht-e-Barchi neighborhood in the west of the capital. The center is a simple structure surrounded by sun-dried mud homes where some of Kabul’s poorest live.

In an interview with The Associated Press, a senior member of the Shiite cleric council Mohammad Asif Mesbah, said the center may have been targeted because it also houses the deeply pro-Iranian Afghan Voice news agency. Its owner Sayed Eissa Hussaini Mazari is a strong proponent of Iran and his publication is dominated by Iranian news. Iran is a majority Shiite Muslim nation.

No one immediately claimed responsibility for the attack but the local Islamic State affiliate has carried out several attacks targeting Shiites in Afghanistan. The Islamic State also issued a warning earlier this year following an attack on the Iraqi Embassy in Kabul vowing to target Afghanistan’s Shiites. Since then, the IS has taken credit for at least two attacks on Shiite mosques in Kabul and one in the western city of Herat, killing scores of worshippers.

In a telephone interview with The AP, Taliban spokesman Zabiullah Mujahid denied involvement in Thursday’s attack on the cultural center.

The Islamic State affiliate made up of Sunni extremists, view Shiites as apostates. The IS affiliate is a mix of Uzbek militants belonging to the Islamic Movement of Uzbekistan who broke with the Taliban, as well as disenchanted insurgents who left the much larger and more well-established Taliban.

As attacks targeting Shiites have increased in Kabul, residents of this area have grown increasingly afraid. Most schools have additional armed guards from among the local population. Still, Ramazandada said security at the cultural center was light.

In a statement released by the presidential palace, Ghani said: “The terrorist have killed our people. The terrorists have attacked our mosques, our holy places and now our cultural center.” He called the attacks against Islam and “all human values.”

Afghanistan has the highest number of mine victims in the world, which along with other roadside bombs, kill or wound an estimated 140 people every month.

Climate change to blame for extreme weather
13 hours ago

8 killed, 7 missing in natural disasters in Ilam
10 hours ago

Climate change to blame for extreme weather
13 hours ago