Attacker uses hammer on officers near Notre Dame in Paris 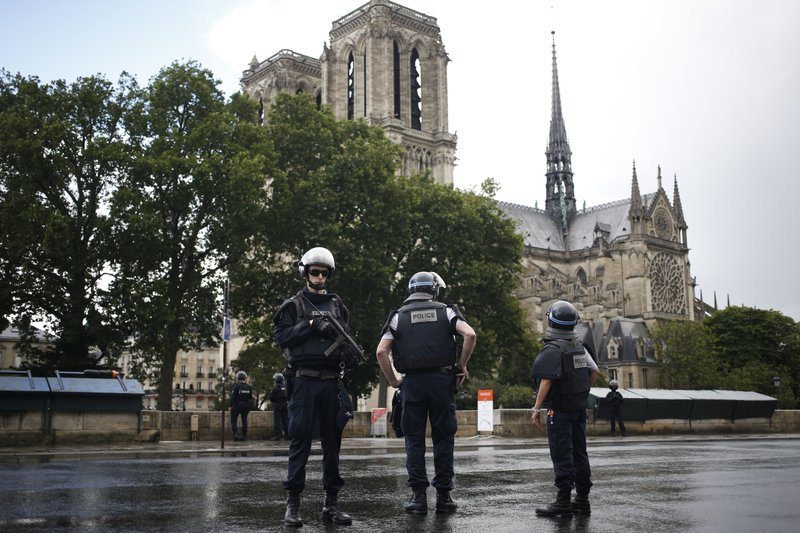 PARIS, June 6: A police officer shot and wounded a man who attacked officers with a hammer near Notre Dame Cathedral on Tuesday, Paris police and a police union official said.

Union official Cedric Michel said a man armed with a hammer went after police who were patrolling the esplanade in front of the world-famous cathedral known for its gothic architecture and gargoyles.

A police spokesperson told The Associated Press that an officer used his weapon to shoot the assailant. The spokesperson was not authorized to be publicly named. He said the unidentified attacker taken to a hospital.

Paris police tweeted that one officer was wounded in the attack.

The incident happened around 4:30 p.m. Large numbers of police cars filled the area on the Ile de Cite island in the Seine River in the center of Paris.

Hundreds of people on the esplanade in front of Notre Dame were evacuated and authorities urged people to stay away from the area. People inside Notre Dame, the nearby Sainte-Chappelle cathedral and area bars and cafes were told to stay inside.

Witnesses described a dramatic police operation in the tourist-filled area.

Lawrence Langner, a 73-year-old American visiting the neighborhood just across the Seine River from the cathedral, told The Associated Press that he suddenly heard a commotion and two detonations like gunshots.

Journalist David Metreau, who said his office overlooks the square that fronts Notre Dame, tweeted that there were two blasts that sounded like shots. Looking down from his office, he saw a man inert on the square.

“The police didn’t seem interested in him at the beginning,” Metreau said. “I thought he was dead.”

They then checked his pulse and medics later came and took him away on a stretcher.

Others posted photos online of what appeared to be the interior of medieval Notre Dame, one of France’s most-visited monuments.

Police spokeswoman Johanna Primevert told The Associated Press just before 5:30 p.m. that the operation was over. She did not provide further details.

Paris remains under high security after a string of Islamic extremist attacks in recent years, including several targeting police officers and security personnel.

In April, an attacker opened fire on a police van on Paris’ Champs Elysees, killing one and gravely wounding two others. The attacker was shot dead by police.

The incident recalled two other attacks on soldiers providing security at prominent locations around Paris, one at the Louvre museum in February and one at Orly airport in March.

Photos: Pinnacle installed at top of Bal Gopaleshwar Temple at Ranipokhari
58 minutes ago
Four killed, 10 hospitalized in forest fires in eastern Ukraine
1 hour ago
Former finance minister Khatiwada appointed as Nepal’s envoy to the US
2 hours ago