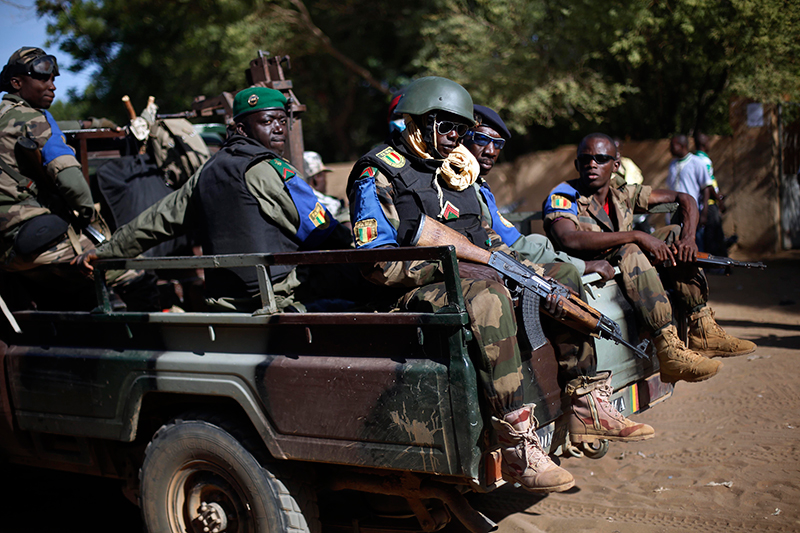 FILE - In this file photo taken on Sunday Nov. 24, 2013, the Malian army patrol the streets of Gao, Northern Mali. A doctor in northern Mali says Wednesday, Jan. 18, 2017 that at least seven people have been killed and more than 50 wounded in an attack on an installation for various armed groups, and the toll is certain to rise. (AP)

The morning blast hit the Joint Operational Mechanism base in the city of Gao. The base houses hundreds of fighters including members of armed groups that signed Mali's 2015 peace agreement. The camp also houses Malian soldiers.

The local official called the death toll provisional. The official spoke on condition of anonymity because he is not authorized to speak to the press.

"I am with the injured now," Dr. Sadou Maiga at Gao's hospital told The Associated Press. "We have stopped all hospital activities to handle the many injured who are arriving. Some have died from their wounds, and others are in a very grave state. At this point, it's not the toll of dead and injured that interests me, it's saving who I can."

Witnesses said the car bearing explosives breached the camp at around 9 a.m., just as hundreds of fighters were gathering for a meeting.

Dismembered bodies could still be seen two hours after the blast.

Officials were trying to mobilize Gao residents to donate blood.

Northern Mali remains insecure despite a French-led military intervention launched in 2013 to drive out Islamic extremists that had taken over the area.

On Wednesday, a new Human Rights Watch report said Mali's government is failing to protect civilians in its northern and central regions from Islamic extremists who killed dozens of people last year while pressuring families to give up their children to jihad.

The report describes how militants have occupied villages, attacked U.N. peacekeepers and tried to impose a strict interpretation of Sharia law. The report also denounces rising levels of banditry, a phenomenon victims say is fueled by the slow implementation of the 2015 peace accord.

Security Minister Salif Traore declined to respond to the report's specifics but said he is well aware of security challenges throughout the region.

The U.N. Security Council was expected to be briefed on Mali on Wednesday.

LUCKNOW, India, Nov 2: The death toll from an explosion at a thermal power plant in northern India has climbed to... Read More...