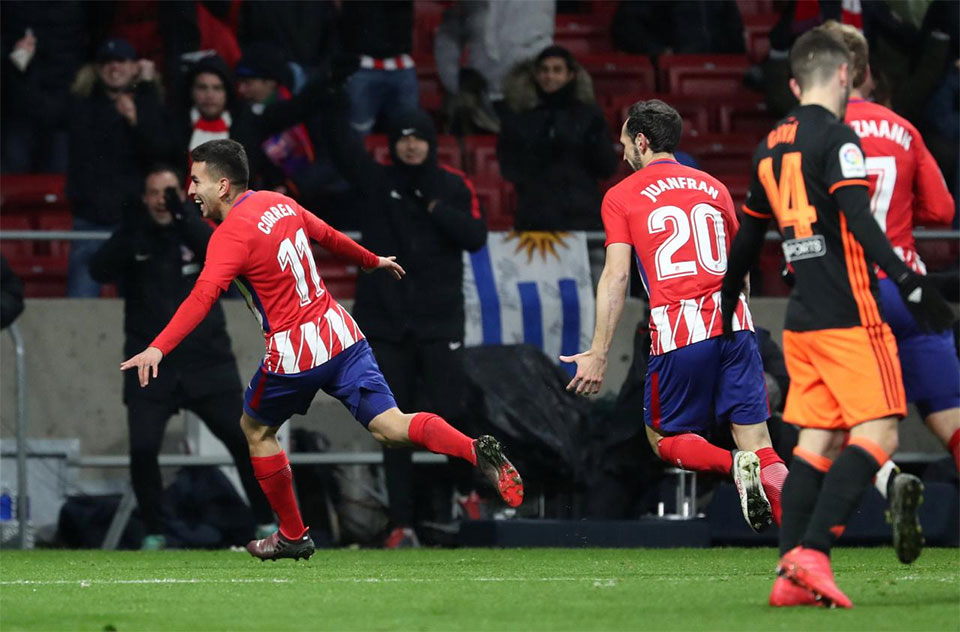 BARCELONA, Feb 5: Atletico Madrid closed the gap on Barcelona to nine points at the top of La Liga, beating Valencia 1-0 on Sunday after the leaders had dropped points at local rivals Espanyol.

Angel Correa’s thunderbolt from outside the area in the 59th minute helped Atletico to get a narrow win from a tight match, after Barcelona needed talisman centre back Gerard Pique to tie a spiky derby clash 1-1 in Cornella.

The defender, whistled throughout after making provocative comments which upset Espanyol fans after Barcelona knocked their rivals out of the King’s Cup in January, buried Lionel Messi’s free kick with a powerful header.

Ernesto Valverde had started the Argentine on the bench as he rotated his side but threw on Messi in the second half as Barcelona struggled to break down a stubborn Espanyol on a waterlogged pitch in driving rain.

Philippe Coutinho came close in the first half when he struck the crossbar from the edge of the box but faded after the interval as conditions worsened.

Moreno headed home Sergio Garcia’s inch-perfect cross in the 66th minute to give Espanyol hope of repeating their King’s Cup first-leg win over Barcelona but Pique had the final say.

The defender celebrated his goal by putting his finger to his lips to shush the fans who had whistled him throughout.

”Some of the fans here have been directing insults at me and my family for a long time,“ Pique told reporters. ”I was telling them in general to be quiet but maybe I shouldn’t have.

“We just need to focus on competing and winning La Liga. In the second half it was impossible to play football. It’s a good draw in the end and we are still unbeaten in the league.”

Barcelona have now gone a club record 22 league games without defeat, surpassing the total of 21 they managed under Pep Guardiola in the 2009-10 season.

Atletico were as miserly as ever at the back against Marcelino’s Valencia as the second and third-placed clubs met at the Wanda Metropolitano.

The hosts had the upper hand, with Neto tipping away a Saul Niguez piledriver from some distance and then repelling Diego Costa’s header from a corner.

Correa broke the deadlock in spectacular fashion in the 59th minute, receiving the ball from Koke and crashing a shot into the top right corner from outside the area for his sixth league goal of the season.

“There’s a very long way to go, we have to continue on the same path,” Correa told Movistar. “We knew it was important to win today and I‘m happy to get the goal that helped the team win.”